Mel Rogers is a successful businessman living in Belarus; he is the Vice-Chairman at the British-Belarus Chamber of Commerce and is currently working on his newest business project – an online educational platform for native Russian speakers online-class.by. In the United Kingdom, where he was born and lived for most of his life, he had started and successfully developed two companies. At the first company he occupied the position of marketing director; it was the first to introduce the Vactor drain cleaning machine in the UK. The second company was a fabrication business to manufacture and install feature steel staircases, Mel was the managing director.

In 2010 businessman Mel Rogers came to Belarus for the first time. His reason for coming to this country wasn’t connected with any business matters, it was much more important. Mel had come to meet the family of his beloved future wife. Being a man of initiative and action Mel Rogers has been able to keep up with family life as well as the business world.

In fact, the idea for the new project was inspired by his wife Ira. “Everything started from my wife who is an English teacher in a lyceum. She is very innovative in her teaching; she uses different textbooks and whiteboard technology. I then remembered about the learning management system which is different from skype (often used for language lessons). With a leaning management system the teacher puts on the screen what he/she wants you to learn. The teacher can give you things from youtube, today’s news as well as textbook information. You don’t have to search for anything, it’s all there. It’s a different system,” explains Mel Rogers.

As the idea became to form more clearly a problem arose, “When I came here I thought she (my wife) can speak English very well. Then I thought she could teach using the western system. But it didn’t work. Those systems didn’t work here. Sometimes the audio and the visual aren’t in sync. So we thought “Well, The system works, but obviously there’s a technical issue here in Belarus”. So I decided to invest money to produce a platform which is specific for the Russian speaking people.”  After 18 months the system was up and running. 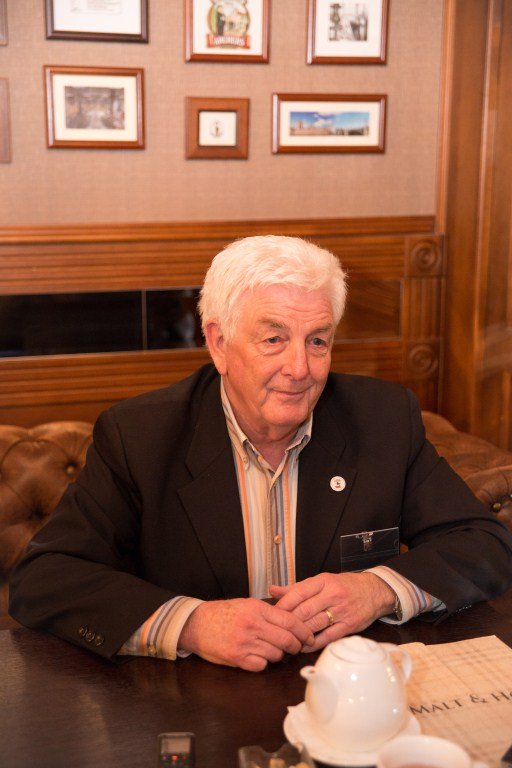 Besides having an innovative platform online-class.by offers another fundamental difference from traditional language learning: “The learning process is more adult orientated; it doesn’t matter if it takes 3 lessons to understand something. You can be more creative during the lessons. Moreover, you can have it on your laptop or your phone so you can catch up anytime. Also, during the lesson if you’re not sure of something and you don’t want to make a fool of yourself you can block out the other students from the group. That way you have a chance to ask the teacher directly. It works the other way around too. If the teacher sees you are struggling, she can block out the other students to help you. It’s a much more powerful tool than skype”.

All of the lessons happen in real time. There are also one-on-one talks with the teacher about your progress and group discussions with a native speaker every other week. One week you have a one-on-one and the next – a group discussion. It’s interesting to note that there are no set topics for group discussions. “One of the group members can say: “I was overtaken by a Ferrari”. So then you bring that into the conversation. It could get as broad or narrow as you want. The native speaker element is not for you to listen to a native speaker, but for him/her to encourage you to speak. How do you feel about this? How would you want to do that? You just want to stimulate. There is only one rule: no politics,” explains Mel. The native speakers leading the group discussions are all professionals educators just like the teachers. The only difference is that those guiding the regular lessons will be native Russian speakers. Mel explains such a choice: “If you’re a Belarusian and you want to speak English it’s better to learn it from a Belarusian who has been professionally qualified at the Minsk State Linguistic University and who has professional experience. It’s better than learning from a native speaker. I’ll tell you why. I talked to people and they don’t believe me. My wife studied English from school up to Minsk State Linguistic University. When I left school I studied engineering and her English is better than mine. Her understanding of grammar and the structure of the language is better than mine.”

In order to maintain high-standards of language learning the teachers are selected very carefully. The most important criteria are personality, professional skills and experience. “The teachers need to tell jokes and have fun with people. You want to bring today’s involvement into it and you also need variety. Nobody can focus their attention for more than 17-18 minutes. That’s what this system allows you to do. If offers flexibility and allows you to be creative,” says Mel.

The cost of the courses are surprisingly low  – a lesson at the online-class.by would cost less than a live lesson with a tutor, around 5-6$, which could make it a valuable learning tool not only in big cities, but in small towns and villages as well, given that they have computers and internet. 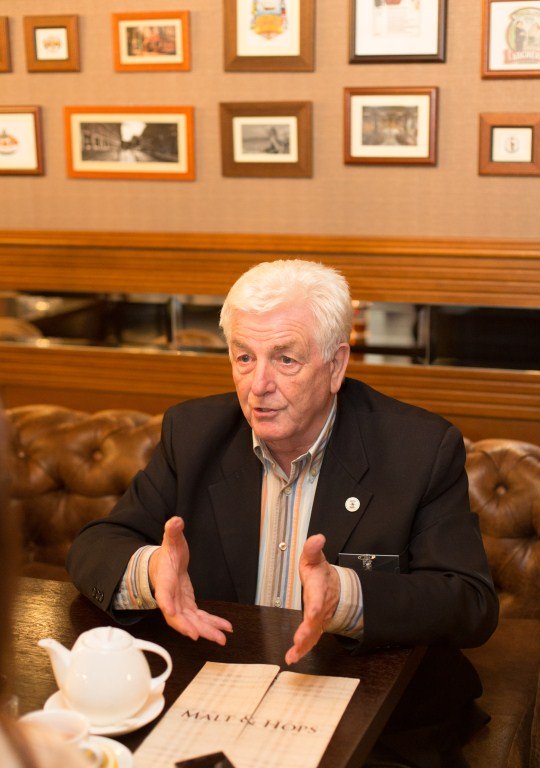 From his point of view the United Kingdom can offer Belarus a resource which it could really use –money. “Not necessarily British money; the London stock exchange allows people to attract money from all over the world,” says Mel Rogers.

When asked about geopolitical issues the Vice-Chairman notes that a major factor above all is how profitable of an investment it is : “You won’t find any resistance from people in Britain to invest in Belarus purely because of any geopolitical situation. It will only be on whether it stacks up.” According to Mel Rogers Belarus has great potential in IT, as for insurance – it’s practically virgin land.

Belarus has the potential, but lacks the desire to be better. Thriving business in Belarus would bring bigger tax yields and therefore improve infrastructure, it’s a win-win situation. “People of Belarus have got to stand up and say that they’re from Belarus. Not from Russia or Ukraine. They’re proud to be Belarusian and their product is the best. It’s no good saying our product was the best 5 years ago. Because now, 5 years on, others have produced something better,” says Mel.

The biggest challenge for the British-Belarus Chamber of Commerce from his point of view is to bring entrepreneurship into Belarus. “Get people to say “yes, I can do it! Yes, I want to do this! Yes, this is how I’m going to do it and find ways to do it!” As Mel Rogers puts it, “sometimes we (BBCC) just want to infect people with the disease to get better. I think there’s a great opportunity to stop looking east for your market and start looking west for your market. Europe is starting to grow again.” 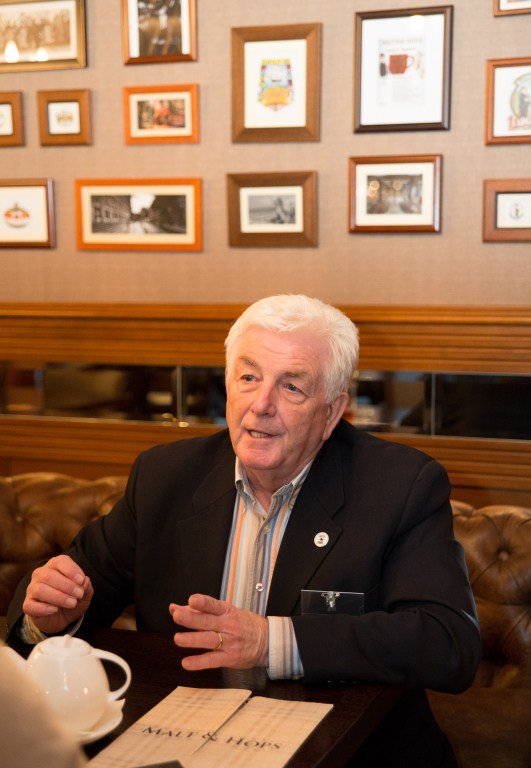 As for his life in Belarus Mel Rogers seems to be enjoying it; as a person who has lived in a lot of different places he’s had no problems adapting to a new life here. Living with his loving wife and having close ties with her relatives is a bit different from the lifestyle that he had in the United Kingdom. “People here are far more family oriented than in Great Britain. There it is more fragmented. You tend to have that community spirit which was maybe present 30 years back in the UK. It’s important for relatives to know about each other. It’s important to be responsible about education, and not intellectual education, but about life style education. So what really impressed me is the family relationships and the strong bond between family members. Of course, there are fights but at the same time there is always reconciliation. I wasn’t used to that. It probably impressed me most because I left home at 16,” says Mel.

Like any ordinary couple Mel Rogers enjoys a quiet evening out with his wife. They currently live in Mogilev, their favorite restaurant is Parmesan. “The service is good and the food is delicious – what else could you ask for”. Here the Vice-Chairman of BBCC notes a setback to Belarus business, “If I’m critical of Belarus its customer care. It needs to improve its customer care.” Another issue that Mel Rogers noticed in Belarus is one familiar to anybody with a car, “I’ve been to many countries, but the driving here is terrible. I could be on a zebra crossing and still the cars go back in forth, in Britain at a zebra crossing you wouldn’t see that.”