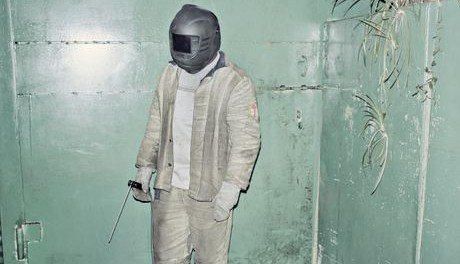 When Rafal Milach arrived in Belarus from his native Poland in 2011, he was immediately struck by how “super-clean and super-tidy” everything looked. “Even the railway stations seemed glamorous,” he says now, laughing. “Then you realise that it is all a facade that must be maintained by the state for both foreign visitors and its own citizens. As a photographer, what I wanted to capture was the sense of unrealness that is everywhere in Belarus and, to me, is synonymous with the Soviet era.”

To this end, he began photographing – with official approval – the winners of Belarus’s many state-sponsored regional contests, who include the best welder of the Republic of Belarus, the best policeman in Minsk and the best milkmaid in the Slutsk region. He also photographed anonymous interiors like the dining hall of Slutsk technical food college, winner of the best public canteen in the Republic of Belarus, and even an ornately wallpapered hallway that won the best staircase in Minsk award.

The end result is a photo-book called The Winners, an extraordinarily revealing yet utterly deadpan glimpse of life in what is often referred to as the last dictatorship in Europe. Under the rule of the current pro-Russian president, Alexander Lukashenko, Belarus is a contradictory country where, as Milach points out, people are free to travel abroad and enjoy unrestricted access to the internet, but there is no press freedom and, of late, the president has faced accusations of electoral corruption and increasing human-rights violations.

“There is,” says Milach, “an unreal glow to the place, but it is like a coat of bright paint that hides old bricks. Everything is about the facade of freedom, even the many competitions, but really the state is not interested in individuals, only in mass control.”

Milach currently teaches photography in the Czech Republic and is co-founder of the Sputnik photographers’ collective, which specialises in post-Soviet “transition issues” in Russian-speaking countries. He has published three previous books, including last year’s prescient Black Sea of Concrete, about Ukraine. 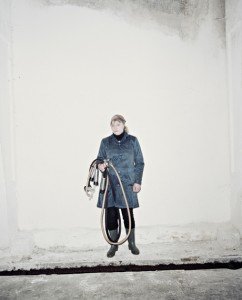 Elena, the best milkmaid of the Slutsk region

He has won several major prizes including a World Press Photo award in 2008. For The Winners, he says, he worked the way a local newspaper photographer might, visiting four or five locations a day and shooting quickly in each, using flash to make the image “as clear and clean as possible”.

The more Milach travelled though Belarus, though, the more he saw himself in the role of an old-fashioned propaganda photographer. “In a way, the project stopped being about making good pictures and instead became about how to make pictures that somehow reflected and revealed the ideology of the state.” He was always accompanied by a state official who would choose a suitable location. “I was not allowed to shoot against what they considered a rough or ugly backdrop, but I began to see that even even that kind of control served the project. I wanted to be a neutral observer and allow the images to be a kind of mirror that reflected the ideological state that is Belarus.”

The Winners is a revealing book in all sorts of surprising ways, not least in its reflection of a country caught between the ultra-traditional values of an older Soviet era and the viral influence of western popular culture. Amid the portraits of the best welder, nurse, potato farmer and policeman is one of a woman in a miniskirt called Natalya, the winner of a “best lookalike of Jennifer Lopez” contest organised by the state-sponsored newspaper, Komsomolskaya Pravda. The accompanying caption reads: “She dreams of her private prosthetic clinic” and also includes her bust size – 96cm, if you must know.

The book also includes a portrait of Yulia, a lecturer at Minsk technical college, who currently holds the title “Miss Bust” of Belarus. Like many of the winners, she does not look overly happy. Marina, who holds the title Miss Belarusan Railway in Brest Region, stares resolutely at the ground and admitted to Milach that she did not like her job, while Valeri, the best ploughman in Kryvancy, refused to be photographed. Elsewhere, there are portraits of the best twins, the best couple in love and the mother of the best large family in the Smorgon region.

“The winners are everywhere,” says Milach, “but the winnings are not for the winners – they are for the system. There are ideology departments in every region that create these awards to maintain the facade. Sometimes I would turn up to take a portrait of a person who was surprised to find out they were a winner. I had the feeling that, if I had not showed up, they would not have known. It was a little surreal.”

And yet many people in the book are proud of their titles and of the job they do. Ironically, The Winners could be read in Belarus as a positive reflection of the state, while being greeted in the west as an ironic and absurdist look at the same. “I am aware of that possibility,” says Milach, “so I hope that people come to the book with an open mind. It is not just some funny photographs of a strange country. I was looking for the absurdity, because where there is this kind of absurdity, there is also sadness. Really, I hope people will be surprised like I was.”