The Council of European Episcopal Conferences (CCEE) opened the Fourth Orthodox-Catholic Forum at the Church of All Saints, the administrative seat for the Belarusian Orthodox Church located in Minsk. At this international meeting of hierarchs from both Orthodox and Catholic faiths, church dignitaries from 22 European countries came to take part in an annual event hosted by the CCEE (Consilium Conferentiarum Episcoporum Europae, in Latin). Noteworthy participants included Philaret, the recently retired Patriarchal Exarch of All Belarus who was the first Orthodox church leader of post-Soviet Belarus, and Tadeusz Kondrusiewicz, the Metropolitan Archbishop of Minsk and Mogilev who is renowned for his role in reestablishing the Catholic church in not only Belarus, but Russia as well.

The theme of the discussion this year was entitled challenges for the Christian churches of Europe, and focused on the crisis of the family, responses to the advent of homosexual unions in several European states, and what should be the ecclesiastical reaction to destabilizing forces in Ukraine. In the half-hour before the opening of the Forum, scheduled for 5 p.m. on Monday, June 2, participants began arriving at the All Saints Church, providing a chance to interact with each other and media about the topics to be discussed. 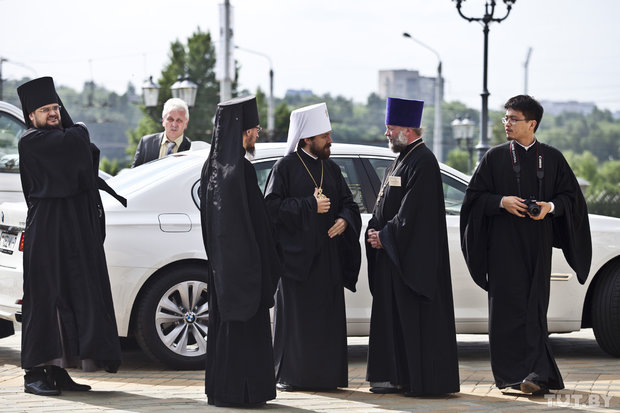 Once the participants were inside, the Forum’s Grand Opening was hosted by Metropolitan Hilarion Alfeyev, Chairman of the Department for External Relations for the Russian Orthodox Church (Moscow Patriarchate). In his opening speech, he introduced the theme of the event: “Religious and Cultural Pluralism: Challenges for the Christian churches of Europe.”

After the opening, Archbishop Kondrusiewicz, described as a moderately conservative Catholic, addressed the Forum and declared that, “Today, Europe can no longer be called Christian. There are other faiths, and there are many who are far from God and religion. There are many who are indifferent, and others who are hostile to religion. We need to pay attention to today’s Europeans, as Europe has lost its European roots and its Christian soul. We need to return Christianity to its soul.” 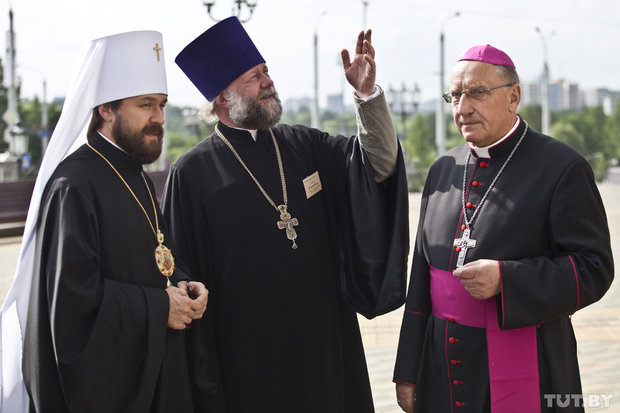 From left to right: Chairman of the Department for External Church Relations of the Moscow Patriarchate, Metropolitan Hilarion; chairman of the organizing committee of the forum and the rector of the Orthodox All Saints Parish, Archpriest Feodor Povny; and Catholic Archbishop and Metropolitan of Minsk and Mogilev Tadeusz Kondrusiewicz

In large part, the challenges addressed by the Forum followed Archbishop Kondrusiewicz’s lead and focused on modern European society and its perceived crises of the family, including rising divorce rates, low level of Christian education provided to children, and the advent of same-sex marriages. Metropolitan Hilarion, a noted theologian, author, and church historian whose ecclesiastical career has taken him to many countries of Europe, expressed distress over the trend in many European countries to deliberately refuse their Christian heritage. “When we travel in Europe and walk through its most famous cities, we see there are Christian churches. And there is even evidence in European cities that shows that Europe was once a Christian continent,” he said in his opening statement.

However Metropolitan Hilarion also noted that, although most Europeans today, in varying degrees, maintain their link with their Christian ancestry, the dominant ideology on the continent has become atheism, or some form of pluralism. “This form of pluralism suggests that religion has no place in the public arena, that it can exist only at a level of the private individual,” he said. “We are not satisifed with this situation. Christian churches should have the right to voice their views. We are deeply saddened when laws are introduced that not only contradict Christianity, but also traditional morality. An example of this is the move to equate same-sex unions with marriages, a conscientious decision to dismantle traditional family values.”

The Metropolitan also expressed his regret over the decision by the Polish Bishops’ Conference to support forces in Ukraine that he said “destabilize the public order and are responsible for the deaths of people.” He called this a big mistake by the Polish Catholic bishops, which has only encouraged the Uniate Catholic Church in that country to take further steps in dividing its people, most notably by sometimes providing services in Latin. Metropolitan Hilarion said that the Uniates in Ukraine today “behave now very ugly.”

“There have been many cases in history where they have used political power to oppose the Orthodox Church,” the noted Russian church historian said. “The Uniate Catholic Church began as a special project for the conversion of the Orthodox to Catholicism. However, this special project continues today. Even as we organize and conduct joint dialogue forums like this with the Roman Catholic Church, the Uniates continue in parallel with their activities that undermine Orthodoxy (in Ukraine).” 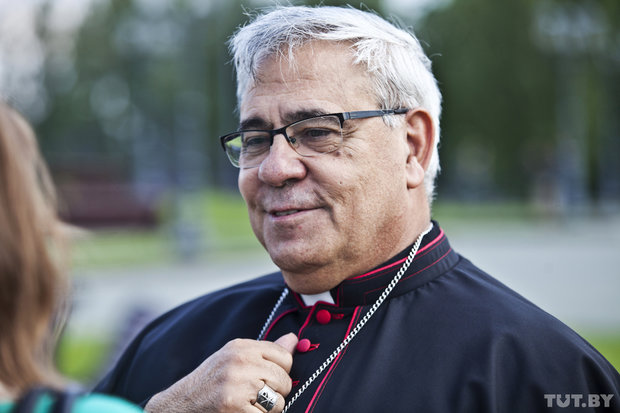 Francisco Javier Martinez Hernandez, Catholic Archbishop of Grenada, spoke on a more hopeful note. The Spanish church leader said that this forum, for him, was not only his first time in Belarus, but in Eastern Europe altogether. He expressed his optimism that the event would have a positive outcome, seeing the opportunity to meet in Minsk as a chance to talk with “brothers and sisters concerned with the same problems.”

Metropolitan Pavel, the former church leader for Ryazan and Mikhailov whose appointment by the Russian Orthodox Synod as successor to Metropolitan Philaret as the Patriarchal Exarch of All Belarus in December still stirs quiet controversy among his more independent constituents, said in his opening statement that in Europe today “liberal views erode the moral foundations.” He saw the forum as an opportunity to discuss problems and offer solutions. He also praised the decision to hold this meeting in Minsk, observing the Belarusian capital as a place that offered a favorable political climate for such discussions, in large part because of the welcoming environment fostered by secular national and municipal leadership for the ecclesiastical discussion.

After the last of the 40 participants arrived, Archpriest Feodor Povny, the chairman of the Forum’s organizing committe and an influential voice in the Belarusian Orthodox Church, gave a tour of the recently restored All Saints Church. 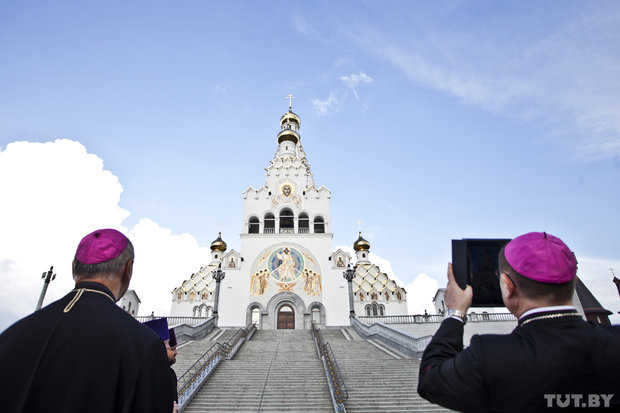 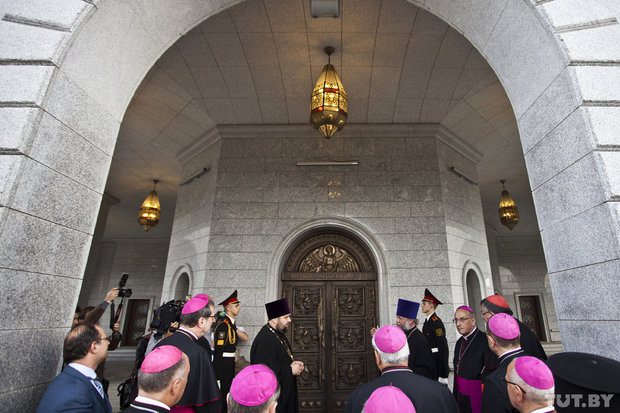 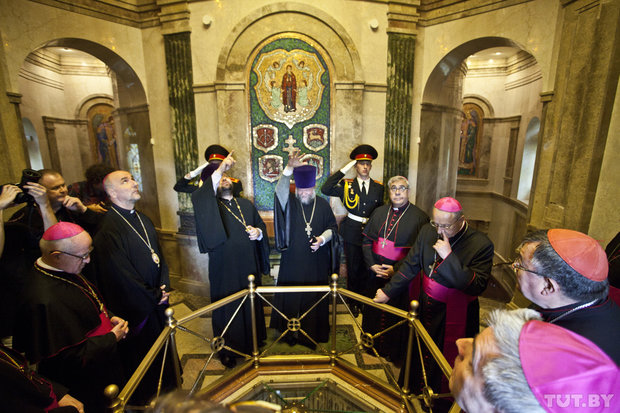 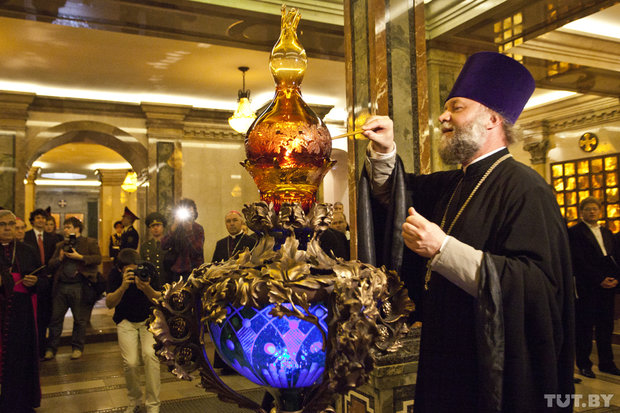 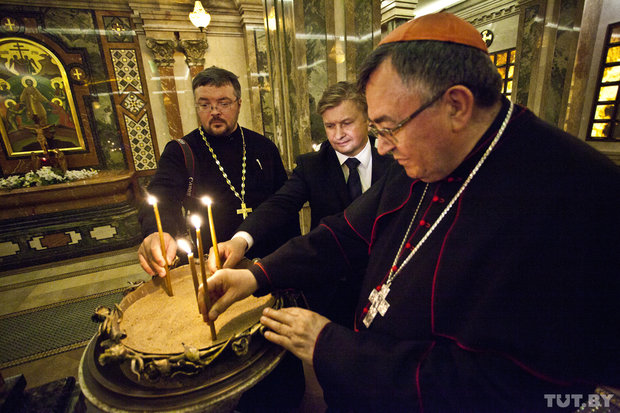 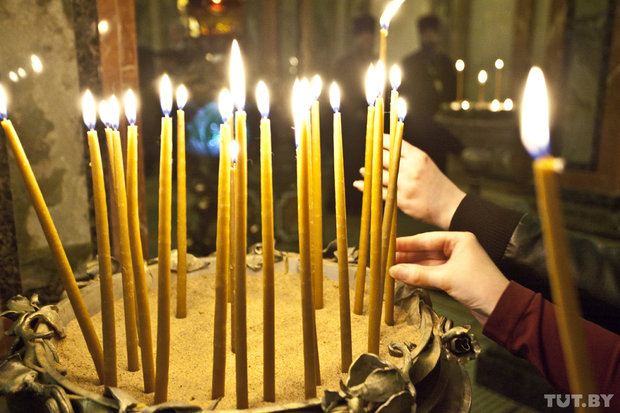 On behalf of Belarusian President Alexander Lukashenko, Leonid Hylyaka delivered a welcoming statement to the congregation when they returned from the tour, speaking of the symbolic significance of this event taking place. He noted the coexistence of the Catholic and Orthodox faiths that defines the religious life of the country. 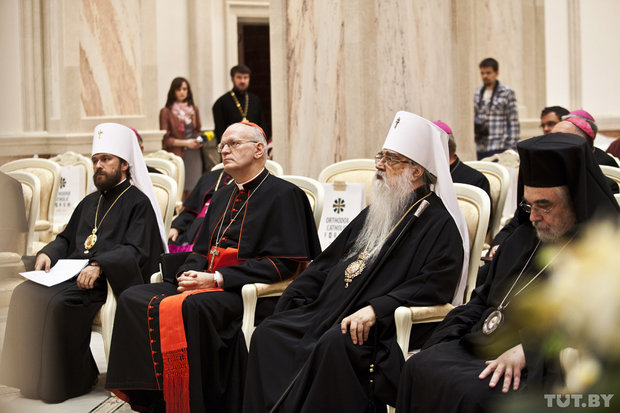 Metropolitan Philaret, whose health concerns led to his retirement as Patriarchal Exarch of All Belarus, next got up to speak. Although he was weak in the legs, in reality he suffered no other noteworthy deterioration of health. Approaching the podium with the use of a walking stick, he greeted the assembly with characteristic confidence and eloquence. “Today, the talk of cultural diversity in Europe is a call for us to be careful and patient,” he said. “We must be trusting, and express the constant desire to understand and be understood. I wish that participants at this Forum enjoy fruitful work and the joy of communicating with one another.”

After an introduction by Archbishop Kondrusiewicz, in which he gave examples of cooperation between the Catholic and Orthodox churches, Pietro Parolina, Vatican Secretary of State, delivered a message from Pope Francis that expressed hope for friendship and unity, and said that he will be contributing to the forum on behalf of His Holiness. He was followed by closing statements for the opening ceremony, delivered by Cardinal Peter Erdo, Archbishop of Esztergom-Budapest, leader of Hungarian Catholics, and President of the CCEE.

The European Orthodox-Catholic Forum in Minsk will continue through the formal close on Friday, June 6, during which time participants will not only involve themselves in working sessions and discussions, but will enjoy such cultural programs as a tour of the National Library and a reception held by Nikolai Ladutko of the Minsk city executive committee. At the end of the work, the Forum is expected to announce its resolution on Thursday, June 5. 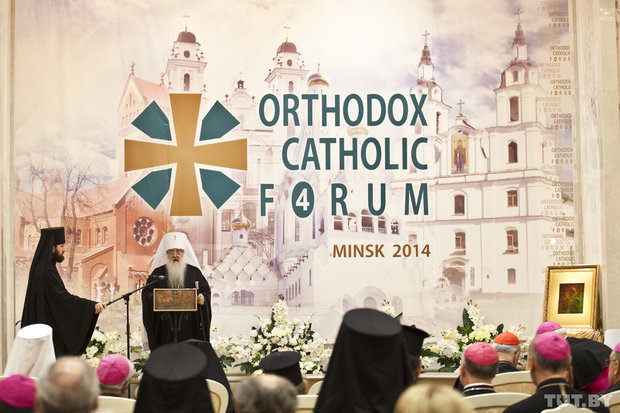 Poster for the Fourth Orthodox-Catholic Forum in Minsk