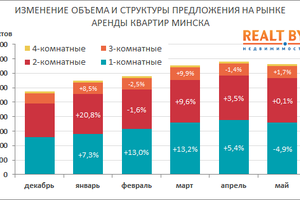 The International Ice Hockey Federation (IIHF) World Championship held in Minsk stood head and shoulders above all other factors in the rental market, causing a significant impact in prices. The real estate specialists at Realt.by measured in detail the effect of the world-class sporting event over the spring quarter, and they found that the short-term rent market segment literally exploded overnight; in particular, while demand jumped during the IIHF Championship, prices rose significantly. However, the long-term lease segment was not excluded from the rising tide.

Renters first felt a very real surge in demand – and a corresponding rise in asking prices – over the past six months that only died down after the last goal was scored. While the world-wide hockey championship in Minsk rattled on for 2-1/2 weeks, foreign hockey fans pushed up prices to such an extent that when compared with the same period last year, daily rentals increased in cost by 98 percent. For a 1-bedroom apartment (two room flat), this figure reached an apex at a 135 percent increase from the price this time last year. The appetite for apartment owners in matters of pricing hardly could be expected to be moderate in such an event, but renters were surprised to see that prices rose 2-3 times as the championship approached. The market was flooded, in particular, with pricey “luxury” offerings that cost a minimum of 150 USD per night. However, the majority of standard daily apartment rentals increased only by 20 percent: the average price per day for a 1-room flat was 51 USD (as opposed to 43 USD a year ago), while a 2-room flat went for 75 USD (compared to 61 USD in May 2013). 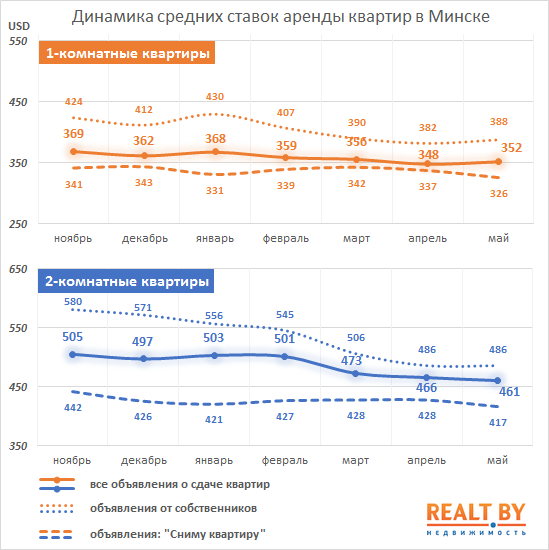 Price line of apartment rentals in Minsk – May 2014

This development, though, did not negatively impact the market position of owners for long-term leases. Part of the apartment vacancies went to visiting hockey fans, but also a large part of the demand came from students who were forced to leave their dorms while their normal living quarters were reorganized as hostels for foreigners. This resulted in a significant drop in the supply of apartments in Minsk over the previous 11 months. The total number of proposals for short-term rent that were available for potential tenants dropped by 2.3 percent. For the 1-room flat segment, this drop reached 4.9 percent, while for 4-room flats, the drop was at 6.2 percent.  Meanwhile, the availability of 2-room apartments remained unchanged (+0.1 percent), with the number of 3-room flats (“treshki”) increasing by 1.7 percent. Student demand focused primarily on affordable housing. Advertising trends for terms like “rent apartment” were the strongest in the 1-bedroom (2-room) apartment segment. Naturally, this slow increase of demand outside of the most expensive luxury options strongly affected the average price for apartments overall. That’s not to say that prices rose massively in this period, but the changes observed here led to an unprecedented rise in the cost of 1-room “odnushek” apartments in 2014. Also, a slight increase in price was noted for 3-bedroom (4-room) flats. On the other hand, the 2-bedroom (3-room) apartment segment continued the trend of the previous months: as the supply of apartments remained consistently high, the price continued to decline gradually. At the end of April, Realt.by’s information-analytical center portal recorded the following rental rates for Minsk:

Since the beginning of the year, the capital market observed market behavior adapting to certain trends between apartment owners and prospective tenants. The overall situation showed that owners were willing to make concessions, while those looking to rent were ready to pay 340 USD and 430 USD for 1- and 2-bedroom apartments, respectively. As a result, the average difference between prices that owners posted in ads and the rate tenants were willing to pay as a fair price was about 50-60 USD, whereas last year, the difference ranged around 100-150 USD. In May, this trend toward convergence continued. The average asking price for apartments made by owners increased for 1-bedroom options, and remained unchanged in the 2-bedroom category. At the same time, landlords appeared to expect having to make further concessions and ask for lesser rent. Monthly snapshot maps of rental prices across Minsk best illustrate these significant changes. For May, the most important factor was the increase in average rental rates for 1-room apartments both in the city center and in outlying bedroom communities. At the same time, the market segment for 2-room flats showed the reverse trend. 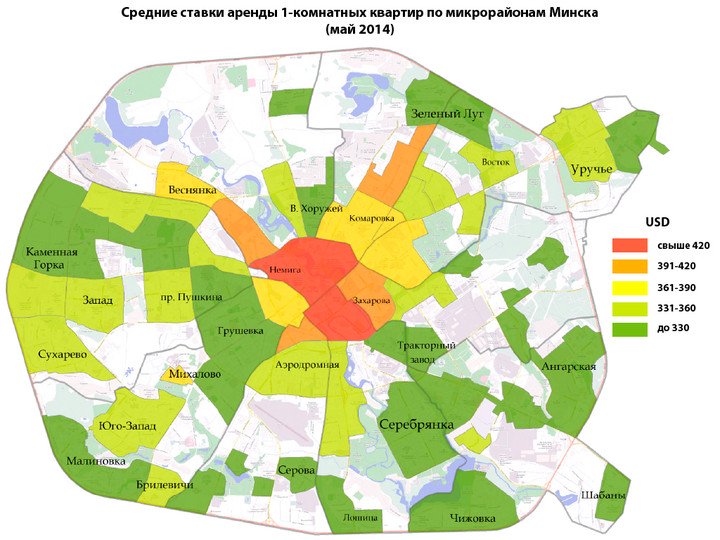 Prices of 1-room rental apartments in Minsk – May 2014 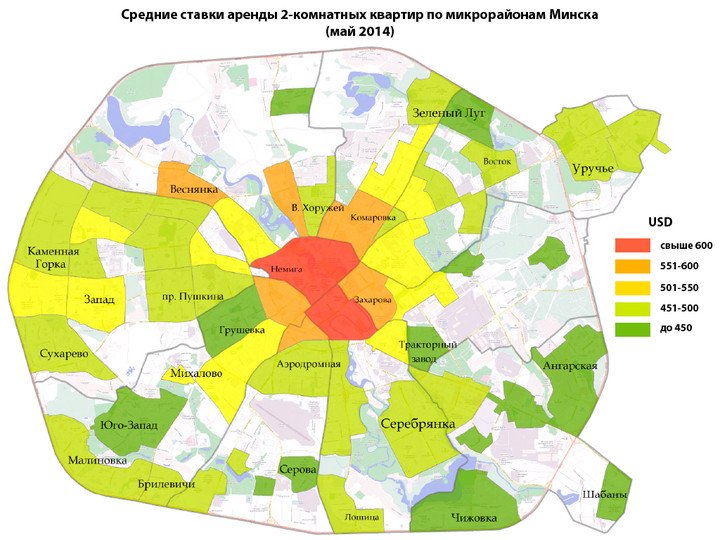 Prices of 2-room rental apartments in Minsk – May 2014