Since the launch of the summer season, the rental market has been a series of fractured trends. Demand for apartments, the market presents Sydney short term rental options and not only Sydney you can find options around the world, which reached critical lows in the spring, gradually gained momentum as the days grew longer. This time last year, peak demand from students came in July, rather than August as it traditionally had been. This year shows all the signs of repeating this performance. Apparently after the bitter experiences of past years, young people are arranging their housing in advance.

For two consecutive months, the supply of apartments within the Minsk market was reduced. In May, the free housing market dropped by 2.3 percent – the result of the eviction of students from hostels and apartments in order to provide nightly rental facilities for visitors in the World Hockey Championship. In June this downward trend gained momentum: the supply dropped a further 6.7 percent. Apartments with three or more rooms decreased supply even further – in June, their numbers dropped by 14 percent.

It is noteworthy that this same situation took place last year. June proved to be a forerunner of a reduced supply of available flats. Student demand is becoming more active after the end of the school year, as more and more people try to settle their housing situation long before the last minute, and are actively seeking housing early in the summer. 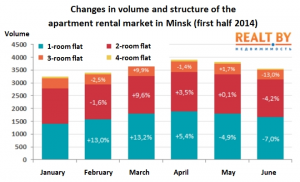 Also read: Does The Design Of An Office Space Matter?

Despite the narrowing of supply for apartments, though, their level is still enough to meet the current demand. As an aside, the growth rate in June proved high enough. This was evident a month earlier when the number of ads for rental apartments jumped by 50 percent.

Tenants continued to prefer options that were the most economical, for which there remain plenty of options. Nevertheless, the demand for low-cost apartments led the way to average rents for one-room flats rising for the second month in a row. At the moment, the trend continues by mere kopecks as for the first time since the beginning of the year, rental rates have shown growth. The largest growth of rental price occurred among the 3-bedroom apartments, with average reaching their highest in the past five months.

At the end of June, Realt.by informational-analytical center portal recorded the following rates: 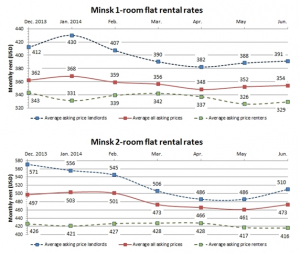 In spring 2014, we saw perhaps the most quietest that the market has been over the past two years. Rental rates have stabilized, and price inquiry differences between tenant and landlord asking prices have been closer than ever. Since the beginning of the summer season, the situation began to change, as average asking prices for tenants remained the same, while homeowners began to ask for more. 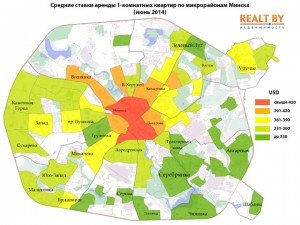 Seasonal demand for lower priced housing may again be the cause of rental price growth. Last summer (June to September), the cost increase reached 12-16 percent as a result of more people seeking lower-end apartments. However, the factor that limits the chances that such a high level of rent price growth will repeat is that the supply of apartments today is 80 percent higher than last year. 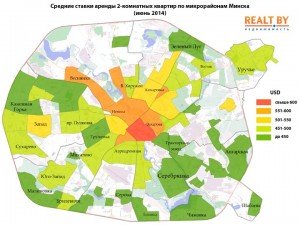 Judging from the geographic pattern made by rental rates across the city of Minsk, the most popular areas of the city for students looking for housing in the summer are those located in the factory districts. These are areas where the lowest rent housing can be found. Average rental rates in the southeastern districts of the city typically do not exceed 330 USD per month for a 1-room flat, and 450 USD per month for a 2-room option.