The Minsk Metro opened for passengers on Friday, June 29, 1984

Although the first station completed and ready for use was actually the Park Chalyuskintsau stop, the opening ceremony took place at the Lenin Square (“Ploshchad Lenina”) station, the one that services the Minsk passenger rail station. The august event was attended by heads of state and other important guests, as well as the builders and workers of other Metro systems that operated across the Soviet Union. A photo by Peter Kostroma recorded the exact time that the ribbon on the new underground train line was cut by Nikolai Slyunkov, First Secretary of the Byelorussian Soviet Socialist Republic, as 15:27. Travel on the Metro on its first day was free for everyone. 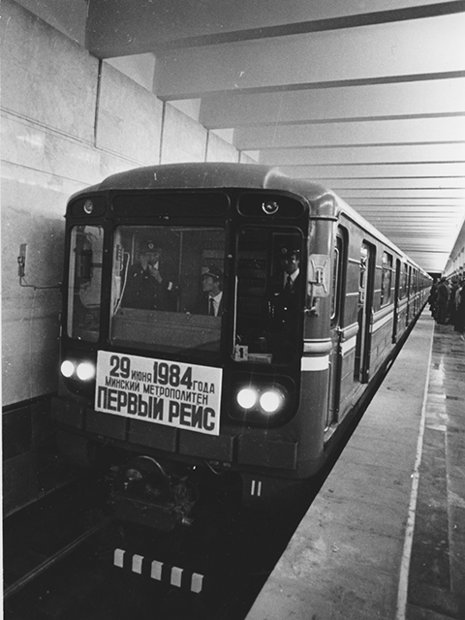 The next morning, regular train service began, and passengers could board the Metro after dropping a 5-kopeck coin into the slot at the turnstile. However, unlike today, a guestbook was posted at all stations for users to sign their encouragement for workers on the new Metro. 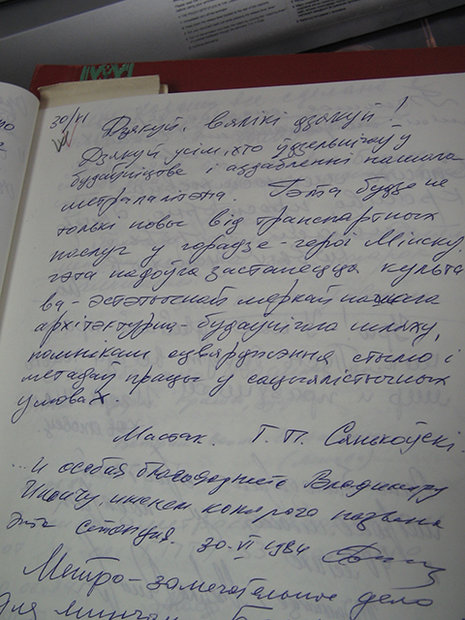 The Metro’s construction was developed under central planning in Moscow, which meant that if a state enterprise received an order for materials to be used in this important project, its production was given higher priority. Almost all educational institutions and businesses contributed to the work on weekdays and even Sundays. If specialists were needed from other cities, Minsk authorities almost immediately provided them with apartments.

When the Metro opened, residents of Minsk could finally travel either on the subterranean trains or, once again, on the main thoroughfare through Minsk. For a number of years, Prospect Lenin (today’s Prospect Nezalezhnatsti or Independence Avenue) was closed to traffic while the tunnels were dug underneath. 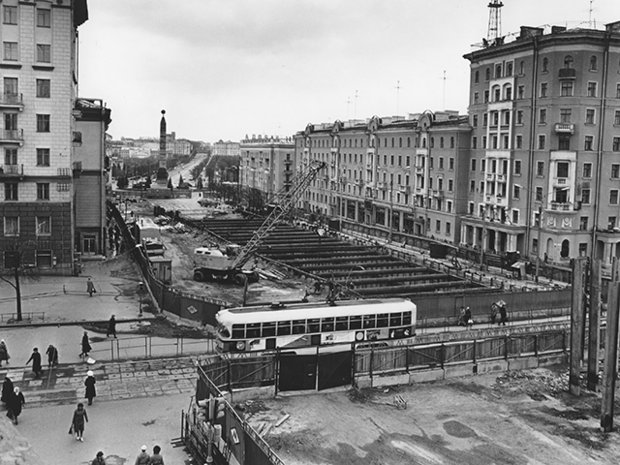 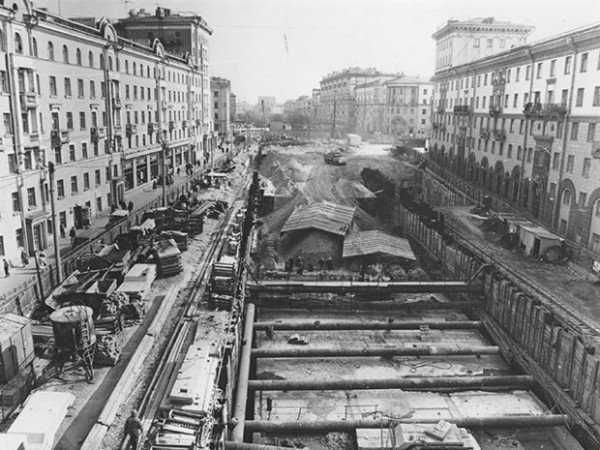 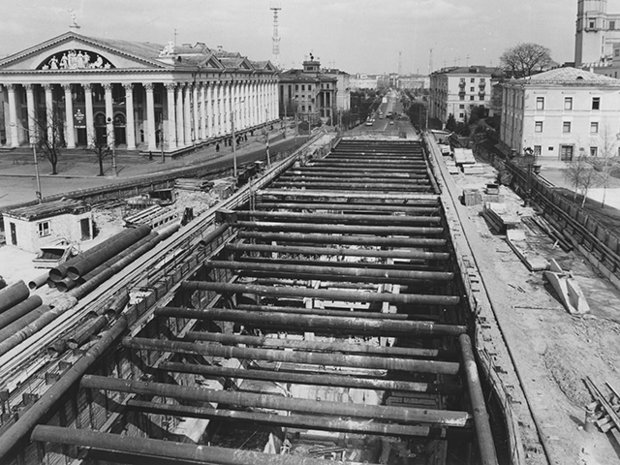 Through the 1980s, the Metro proved to be an effective solution to the serious traffic problems of the republic capital. A hundred large enterprises provided work for citizens who commuted each day from surrounding villages and growing residential neighborhoods built to meet the city’s housing demands. Ground transportation struggled with the ever-increasing traffic. As a result, no one was surprised that from day one, the Metro became the favorite form of public transportation for Minsk residents. The opening of the first underground train line really was a national holiday.

According to comments in the guestbooks, the first passengers were as impressed with the speed of travel as they were with the appearance of the subway stations. A huge number of enthusiastic responses were left by those first visitors, including the Metro builders themselves, visiting subway workers from other Soviet cities, war veterans, honored laborers, university students, and schoolchildren. The books can still be found at the Metro stations. After reviewing the entries made during those heady summer days of 1984, readers are left with no doubt that its opening was to Minsk was one of the most important events of that century.

Today, the total length of both operating lines on the Minsk Metro is 37.27 kilometers. Trains service 29 stations, 15 of which are located on the original Maskouskaya (Moscow) line, and 14 of which are on the Autazavadskaya (Auto Plant) line, opened second on Dec. 31, 1990, exactly a year before the break-up of the Soviet Union. Nowadays, commuters ride on 72 five-carriage trains that service the system, 37 of which operate on the first line, and 35 of which operate on the second. The number of carriages that are included in the total rolling stock for the Minsk Metro is 361.

The passenger count for the whole of 2013 was 328.3 million. This amounted to a little less than 900,000 passengers per day average, a four-fold increase in the 207,000 passenger average from when the train first started operation in 1984. The long-term plans of the Minsk Metro envision extending the system to four lines with a total of 77.1 kilometers of track, servicing 58 stations.

In the short term, the Autazavadskaya line is expected to be completed soon, with an extension of track westward from Kamenaya Horka to Chervony Bor station, and an extension eastward from Mahilyouskaya to Shabana station. The Maskouskaya line will also be extended to completion at some point in the future from Uruchcha (Brookside) Station to Smalenskaya Station (or Spartavny Kompleks Station, according to other sources) at the line’s eastern terminus.

However, one of the system’s biggest changes is expected in three years, when the Zyalyony Luh line opens its first four stations in 2017. These are projected to be: Vakzalnaya (interchange with the Maskouskaya line at Lenin Square), Francishak Bahushevich (named elsewhere as Klara Zetkin station, on the square with the same name), Yubileynaya Ploshcha (Jubilee Square, interchange with the Autazovodskaya line at Fruzenskaya station), and Kovalska Sloboda (named elsewhere as Praspekt Masherava Station). The line is expected to extend southward in 2020 to include Zhukouskaha (near the street with the same name), Aeradromnaya (the Metro stop on the Second Ring Road near the Minsk-1 airfield), Nemorhansky Sad (named elsewhere Loshchytskaya for the nearby river), and finally, following Kizhavatava Street, the line’s terminus at Slutskaya Shchashcha (named elsewhere Karzhanyevskaha for the nearby cross street). This third line will eventually run over a 20.8 kilometer route servicing 16 stations in between the Savetski District in the north and the Kastrychnitski District in the south, and include a maintenance depot.

The fourth line, planned for construction after 2020 and operation before 2035, will run over a 20.3 kilometer route servicing yet another 16 stations that will connect the many new residential areas on the northwest of the city and the industrial areas located in the southeastern Zavodski District. Its first nine stations, covering 15 kilometers of track, will run southward from Bangalore Square station (where it will connect with the Zyalyony Luh line at the future Surhanava station), meet the Maskouskaya line at Akademiya Navuk station, then continue onward along the Second Ring Road to a new Botanical Garden stop (named elsewhere Platanava for the nearby cross street), and Uralskaya (named for that cross street) before intersecting with the Autazavodskaya line at Traktorny Zavod (the Tractor Factory stop). It then will pass through stops in the Seryabranka neighborhood further south on the way to the Chyzhovka suburb (where the terminus stop is supposed to be named for the nearby street of Tashkentskaya). 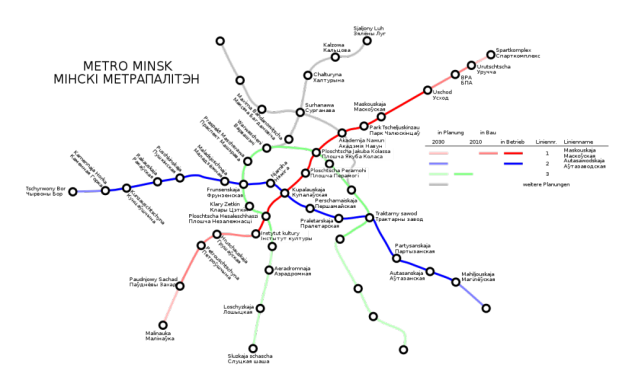