Gomel guys try to teach children via the right cartoons.

“There are so many varieties of cartoons around us, but few teach the basic vital principles”, thought guys from the Gomel animation studio Chin Up. So they decided to create their own cartoon “The Ancestors”. As the creators say, the target audience is children from three to five years; the best age for fantasizing. “Ancestors” are set in the Age of the Dinosaurs, a fascinating era calculated to both engage the fantasies of young children and to encourage them to learn about the world.

The first episode and all the subsequent adventures of Lyolya and Shyapa can be found at the YouTube channel “Развивающий мультик Предки” (Developing cartoon Ancestors). 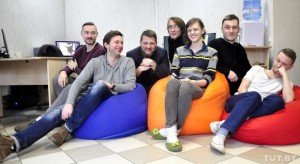 “Children’s cartoon is our first step to adulthood”

In the center of Gomel, a cozy cottage is full of working people. But not every person who takes part in the studio projects shows up in the team photo. Freelancers from diverse countries, unfortunately, stay behind the scenes.

The core of team, in Gomel, is made up of creative individuals drawn from every corner of Belarusian life. Only Olya and Sasha, who actually draw the cartoon characters, have any formal education in art. Thirteen other members of the core Gomel group came from such diverse areas, as architecture, psychology, ecology, geography and Special Forces. Surprisingly, none of them has a child. 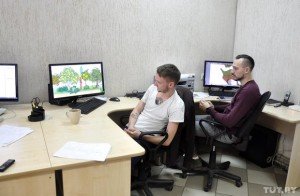 Three episodes of “Ancestors” are written by Alex Ray (the alias of a Gomel screenwriter). He’s known for work on “Mr. Freeman” and for his collaboration with Toon box, the first Russian animation studio whose creations reached the European market.

“During our student days we played KVN and wrote jokes; we made “Hey, Freshman!” and wrote television and film scenarios” Oleg Pechen, studio headmaster and cartoon director says, “Our love of creativity resulted in this animation studio. We began with Russian movie trailers. Now we feel ready for a huge project such as an animated film serial”. 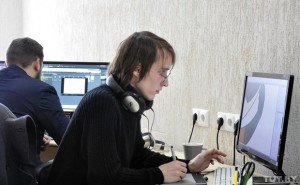 “The Ancestors” cartoon in proceedings

“We jump, run and make faces” and other working phases

The working process is long and thorny. Of course the core of every episode is the scenario. The written first script goes to Moscow for audio dubbing. “Unfortunately, we don’t have professional voice actors here”, explains the studio director. Only when that is done painters and animators start to draw the scenes. 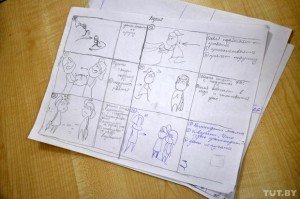 The core of every episode

The characters’ voices largely influence the work of every artist. Simply stated, the artists draw scenes and characters according to what they hear. “We listen to the character’s voice and intonation, are we create a character with expressions and gesture to match. To get a better idea of the movements we are called upon the draw, we run around the office, jump up and down, and make faces at ourselves in the mirror. The team agrees that every character in the serial acts just like the artist who drew him.

The cartoon has five main characters: Father, Mother, their children Lyolya and Shyapa, and the Fox. The birth of animated serial was only a starting point for future creativity. For example, the first Mother differs completely from today’s version. “She was a fashion-monger and too sexy, not a homemaker”, the animators laughed. “So we changed this character”. 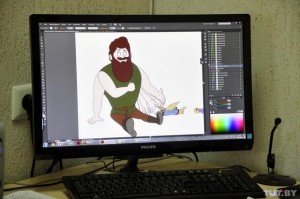 The Fox, perhaps the brightest character in Ancestors, appeared in the serial at the very last moment. Or rather, it came to “life” from a Mother’s fur collar. “We decided it was not a good idea to associate a dead animal with the character of the Mother.” The fifth character appeared, and the script had to be rewritten.

The artists’ job is a continuing challenge, to draw the same characters, day after day, but in new and interesting ways. But guys never lose heart. During the course of a long day spent creating a positive, uplifting and educational animated serial, some of the Ancestors’ creators feel the need to listen to heavy metal music (through headphones) to maintain their creative edge. 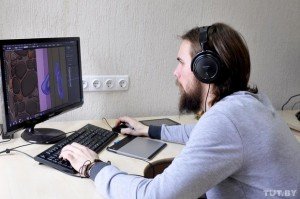 The studio fills the sounds of joyous creativity, but deadlines here are a grave matter; by the end of the month, each artist must have drawn at least 20 separate scenes. It can take an artist an entire day to draw a two-second scene.

The most common comparison is with The Flintstones. “After a thousand years of human culture, it’s hard to find a completely new theme “, says Oleg Pechen. “The Ancestors” and “The Flintstones” are both set in The Dinosaur Age, but their characters, themes and messages are completely different”.

The Ancestors teaches traditional maxims: we are responsible for what we have tamed, we should not lie, or judge a person by his appearance, we should learn when to wait and when to act.

“If we explain these principles to a growing child, he may be better able to avoid problems, to become a better person”. 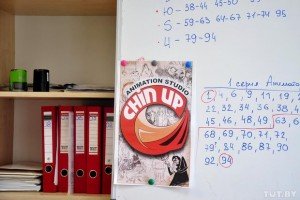 The Ancestors’ first episode recently appeared in the Internet, and over 13,000 people have already watched it. The creators use the YouTube channel for audience feedback. “It’s a huge focus group, helping move Ancestors in the right direction”.