Who are the authors of fashion trends with Belarusian national accent?

The young women in bright national costumes met German Chancellor Angela Merkel and French President Francois Hollande who arrived at Normandy format summit in Minsk. The ceremony was solemn and memorable. Who designed the costumes for young women who met Merkel and Hollande in the Minsk National Airport? Our reporter contacted with the Belarusian couturiers.

As it was learnt, the National Beauty School in Minsk is busy with the preparation of the young women and their outfits for such events.

“Yuri Piskun is the author of dresses, and red fur coats were made by the master of felted cloth Elena Sergeeva,” says the director of the National Beauty School Elena Troitskaya. 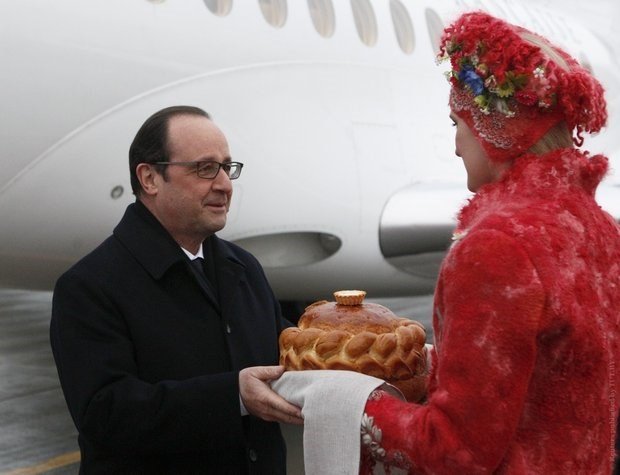 “We have the costumes from “Skarbnitsa”, and young designers also cooperate with us,” continues Elena Troitskaya. “We ask professionals for help not to strike the mud with our faces and be confident that these costumes do have connection with the Belarusian history. The historic costumes have a stylized design, adapted to modern times, but their ornamental patterns and colors are original”.

The costumes of the young women at the meeting of the Italian leader Silvio Berlusconi and the Patriarch Kirill of Moscow and All Russia also cause bewilderment in the forums, as they say the Belarusian national costume is not associated with those awkward flowers on the coats and strange hats. The head of the fashion designers at “Skarbnitsa” enterprise Elena Galievskaya explains that those were Mongolian coats (svitki). 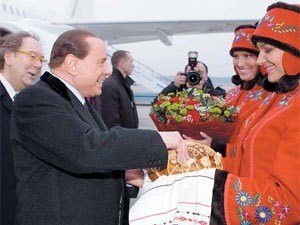 According to the words of Elena Galievskaya, the Belarusian women never used to wear the hats at all. Our great grandmothers wore such head decorations as ‘namitki’ (a traditional headgear for married women from Eastern Slavic countries), headscarves and warm shawls. Obviously, it would be inappropriate to combine a solemn svitka and a head scarf in a winter costume, and that’s why the fashion designers venture to wear the young women in the hats with a stylized design.

Svitka is an old-fashioned name for men’s and women’s long outerwear made of a homespun cloth, a kind of coat that was a part of the Belarusian national costume.

At the solemn ceremony of meeting the Belarusian athletes arrived from Sochi 2014 Winter Olympics the young women looked extremely elegant. The close-fitting beige coat, decorated with flowers and beads, has also “folk” roots. 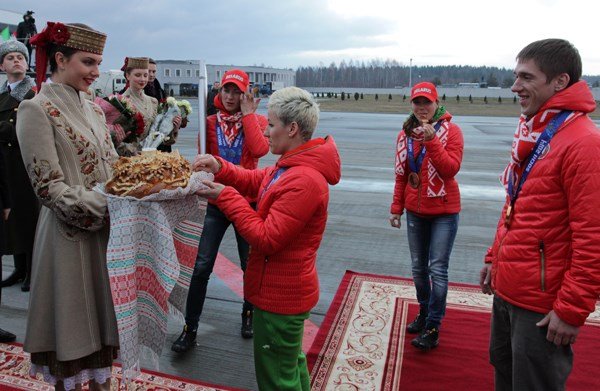 According to the words of Elena Galievskaya, the preimage of the costume became a women’s svitka, discovered during the Skarbnitsa’s expedition. The specialists with researcher Marya Vinnikova learnt all the svitka’s peculiarities, and then on the basis of the analysis they made a reconstruction with the usage of contemporary elements. Per se, they made it narrower, changed a little bit the pleats, decorating the cloth from the back, and worked on its back part. 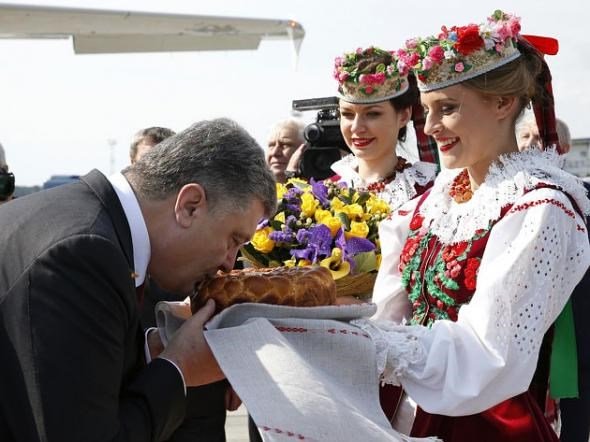 This is the most famous summer costume for young women, wine red waistcoats and densely green skirts with the Belarusian ornament made by a specialist in the Belarusian national costume, Associate professor of the Belarusian State Academy of Arts Yuri Piskun. As the master says, the wine red color was always valued by our grandmothers, and he reminds of purple geraniums on the windowsills of houses that were considered a symbol of beauty.

“The graphic ornament – cones and cornflowers, is immediately associated with the Belarusian nature. The diametrical ornament has symbolic codes, but they can not be entirely read in modern times. In any case, I also use a rhombic ornament as a mark of belonging to Belarus. A rhomb is a symbol of circle, movement and connection between people, and they are common principles”.

“It’s very important for me that the costumes to be connected with the national tradition, to have an aesthetics of the Belarusian national costume, says Yuri Piskun. Stylization should be delicate for not to worsen a preimage. Costumes should be bright, but not wild or vulgar. In this case (meeting the officials at the airport) there is a special task, that’s why my ultimate priority is to make the costume not to be out of tune, and to look graceful and harmonious, being bright, for it would seem to be not Papuan, but Belarusian one”.

The “golden” costume can be seen more often during solemn state ceremonies such as presenting state awards.

“There was a task to create a costume, using natural fabrics, that would resemble a straw and at the same time would illustrate the national features, says Elena Galievskaya. Here you can see a silk close-fitting dress, and a sarafan (sundress) to wear over it. Sarafan, woven, with a little bit overrated waist, was typical for the Mogilev Oblast. And thus, a headgear in a dignified style decorated such a costume, based on sarafan”. 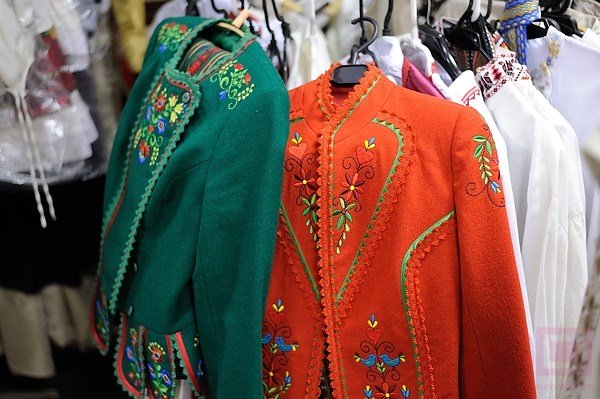