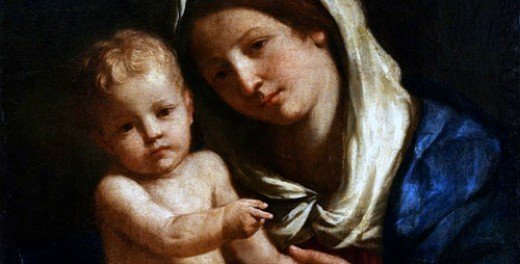 The National Art Museum of Belarus welcomes to a new display which is called “Mater Dei. Iconografia di un Amore”.

The exhibition features the paintings from Italy, the town of Perugia, and from collection of the National Art Museum of Belarus.

The preparation of exhibition took much time and effort. Perugia is situated in the territory of the Umbria region, where there are many so-called “hidden” masterpieces. Thus, it means that few Italians know about them. Thus, the citizens of Minsk have an excellent possibility to look at the rarest iconographic patterns. Fist of all, they are twelve paintings of the 15-19th centuries, that illustrate the evolution of Virgin Mary’s image (Madonna, the Mother of God). The exhibition gives a unique opportunity to get acquainted with a series of iconographic schemes through the works created by Italian painters, masters of drawing and engravers.

What are these iconographic schemes?

Madonna Lactans (Virgo Lactans или Maria Lactans) – the most ancient image type of Mary and child which had analogues as early as the pre-Christian art.

Madonna and Child Enthroned (Regina Coeli) is the type of image that pays attention on a special role of the Virgin Mary as a symbol of the Church itself.

The Virgin Mary with her hands clasped in prayer (Madre Pia).

St Maria a mother – in the epoch of Renaissance this image acquires more tints of human feeling, losing its religious significance.

St Maria with the figures of saints and donators – the images of holy men can personalize distinctive moral and intellectual features of the Renaissance people.

Besides antique icons, the display also includes the paintings and etchings of the students and teachers of Pietro Vannucci Fine Arts Academy, created under the influence of the masterpieces.

Speaking at the opening of the exhibition  Ambassador Extraordinary and Plenipotentiary of Italy to Belarus Stefano Bianchi underlined that Perugia is his native town, and it was his dream and one of the aesthetic aims of the diplomatic mission to bring the paintings of Renaissance masters and show them to the Belarusian spectators. Stefano Bianchi’s idea was supported by Pietro Vannucci Fine Arts Academy, the National Gallery of Umbria and the Savings bank of Perugia.

“Thus, “Mater Dei. Iconografia di un Amore” has not only not only artistic, aesthetic and educational meaning but also gives to Belarusian visitors an opportunity to see artworks from three largest collections of Perugia,” noted the Italian Ambassador.

The exhibition will last till 4 May.

The Academy of Fine Arts named after Pietro Vannucci (Accademia delle Belle Arti “Pietro Vannucci”), founded in 1573, preserves one of the largest collections of art works and until present time continues its educational mission. The foundation of collection coincides with the year of the Academy’s establishment. In 2012 after a long reconstruction the museum of the Academy was reopened.

The Savings bank’s fund of Perugia was founded in 1992. The fund features the activities on preservation and promotion of the richest cultural heritage of the region, posses collections of artworks of the 16th–21st centuries, the most significant from them are the paintings by Renaissance masters.