Belarus’ representatives at the 2015 Eurovision Song Contest (duo Uzari & Maimuna this year) for the next time haven’t succeeded in conquering the European musical Olympus. However, a Belarus-made dress of Papilio Fashion House managed to cope with a mission, raised to the national idea. At the final’s opening the Austrian violinist Lidia Baich performed in a dress created by the fashion designer of Brest.

Papilio director Irina Posnyak told that there were no suggestions to make a dress for the Belarusian violinist Maimuna, but then the Austrians connected with the German partners of the Brest’s brand. Irina Posnyak discussed all the vicissitudes of wedding fashion with Relax.by reporter.

“We acknowledge that fashion is an art, but a mercantile publicity wonder how much this dress costs…”

“During creation of the dress for the Austrian violinist there were used only best materials, the cost of which we don’t name, including the Italian designer’s fabrics, French lace Chantilly and glass beads Swarovski. The customers expressed their wishes, concerning the color, and the dress cut the designer agreed with the violinist herself. There were details that we suggested due to her figure peculiarities”.

“Is there any difference between Belarusian and European wedding fashion? Do our brides have special orders, for example, wedding dresses with long trains or, on the contrary, lightened ones?”

“Our dresses are well-purchased in Italy, Germany and other European countries. The German partners took our brand into a dealership in Switzerland, Austria, Belgium and the Netherlands, and they are satisfied with our sales. We don’t create new fashion collections for the West. Everything that is on sale in Belarus can be bought in the European stores.

It is impossible to say that the Belarusian women’s taste differs in anything. There is only one nuance, as the Germans, for example, prefer the lightened wedding dresses. Perhaps, because the young people like to organize their ceremonies by the sea. However, many Europeans also favor stylish and heavy with long trains. 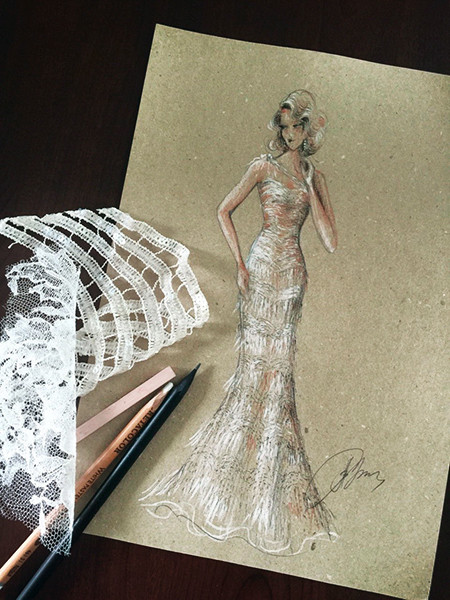 The draft of Lidia Baich’s dress

The Western market is very complicated, and Europe is conservative, and, thus, we made our way, long and serious enough to enter the European market. This year the International Exhibition of Bridal and Formal Wear SI SpozaItalia Collezioni 2015 was held on 22 – 25 May in Milan (Italy). And only a wish of a designer wasn’t enough to participate in it. It was necessary to receive an invitation from the organizators or to send an application and have patience to wait until the management would approve it after having a look at the collection and promo production. Reviews about a brand in European mass media are also necessary.

Three Russian brands applied together with us, but our participation was approved. This year we also received a direct invitation from the expo’s organizators.

Text and photos by Relax.by.