Brief guide about marriage in Belarus. What to expect before and after

Love is a tricky thing. Rejecting borders and nationalities, it can catch you everywhere. And you should be ready for that. If you’re one of those lucky guys, who have found the love of your life in Belarus and have decided to get married in here, we suggest you reading through this guide, concerning the marriage regulations in Belarus. Is it difficult to get married on the territory of Belarus, if you come from abroad? How many documents should you take with you? And (we hope that won’t happen to you, but still…) what should you know about the divorce regulations in Belarus?
Marriage in Belarus

According to the National Statistical committee, 93% of all the marriages in 2013 were contracted between Belarusians. Nevertheless, every year the number of marriages with foreigners is increasing. It’s an obvious sign, that it’s not difficult at all to get married on the territory of our country, as opposed to such countries as Canada or Germany. In Germany there are so many different federative lands, each having its own marriage regulations, that it’s quite easy to be confused and not to manage to get all the necessary documents. You will just get worn out by preparing for marriage registration, to say nothing of getting ready for the wedding itself. Spain and Italy, on the contrary, have the easiest marriage regulations. Whether it’s somehow connected with their mentality – fluent speed of response, inborn passion and amorousness – is quite hard to trace, but it usually takes just one month to formalize a marriage.

There’re two main things to know before getting married in Belarus. First of all, you should stay in here on legal grounds. And also you shouldn’t forget, that you need to be aged at least 18 to getmarried on the territory of Belarus.

Belarus stays somewhere in between, having quite democratic rules. It will take you for about 2 months to register a marriage. Olga, a Belarusian by nationality, having registered her marriage with a man from Belgium on the territory of Belarus, shares her observations about all the procedures:

“On the whole, the procedure of marriage registration is absolutely different in Belgium. I think that in Belarus this procedure is much simpler and quicker for a foreigner. For example, in Belgium, a foreigner has to fill in a special form, which shows whether it’s a love match or a mock marriage. There’s no such thing in Belarus, which makes the procedure simpler”.

In spite of your coming from abroad, you’ll be welcomed at the Belarusian registry office. In fact, only marriages performed at the registry office (it’s called ZAGS in Russian, which means Office for Matrimonial Acts Registration) are valid in Belarus. So there’s no possibility of skipping that part of the preparation. A church ceremony can also be held, but just after visiting the registry office. The application fee together with marriage registration will cost you for about $7, charged in local currency.

So how does the marriage registration work? Not every registry office will do. If you come from Russia, Ukraine, Lithuania, Latvia or Poland you should fill a marriage application with a registry office assigned to the area where your Belarusian better half resides. In case you come from some other foreign countries, the only way to register a marriage is to go to the Minsk Wedding Castle (8, Kommunisticheskaya street). Applications should be filled by both of you, thus showing in the presence of a registry office representative that you literally have every intention of marrying each other.

Unfortunately, there’re some circumstances, when the presence of both marrying persons is impossible or very inconvenient (heavy illness or military service, for example) at the moment of the application submission for a marriage registration, but then you shouldn’t worry. There’s always a possibility to submit the application signed by both marrying persons just by one of them.
Bear in mind, that according to Belarusian laws, a marriage can’t be registered sooner than 3 or later than 90 days after it was applied for.

Necessary documents for marriage in Belarus

It’s very encouraging, that the pile of documents you need for the registration is rather thin; it includes:

Passport. It would be quite weird if you didn’t have to show your passport at the registry office, wouldn’t it? All you need to do is visit a us passport office to get one. Just bear in mind that it must be registered at the Ministry of the Internal Affairs, translated into Russian or Belarusian and notarized. There’re lots of translation agencies in Minsk, so it wouldn’t be any problem. Just remember, that this process will require some time and money.

Certificate, confirming that you’re not married or that you’re divorced. Unlike your passport, that is to be registered, translated and notarized in Belarus, the certificate is given to you by the consulate of your country. And it must be also translated into Russian or Belarusian and notarized.

Sometimes you also need to have the marriage license from your native country, which can be given to you by any competent governmental organization. This is the most confusing part of the process. Whether you should have this license or not, depends on the legislation of your native country. All the registry offices in Belarus find out, whether such license is required, at the moment of accepting the application. If such a permit is required and you don’t have it, the marriage can be nullified in your country.

As far as this, let’s be honest, not so tricky document quest is over, you shouldn’t have any problem getting married in Belarus. Just don’t forget that after the registration you still have to legalize your marriage license at the consular department of the Ministry of Foreign Affairs and translate it to your native language.

A happy Belarusian, Olga shares her experience of getting through all the stages of the marriage registration in Belarus:

“Well, at first we came to the local registry office, but their representative told us, that we had to go to the Wedding Castle, as far as marriages with Belgians can be registered only there. We came to the Castle, stood in the queue for a little while (there were just two or three couples before us), and then we entered the hall, where we were welcomed by a very pleasant and friendly woman, who was, as far as I remember, the manager. She explained to us, which documents we should have with us during our marriage registration. And then we started gathering all the necessary documents. After that, we came for the second time to fill in an application. We had to pay the application fee that day, so we were given the receipt and we went to the nearest bank (5 minutes on foot). It just took us for about 20 minutes, on the whole! Then we came back, gave the receipt and filled in the application. Our next step was to choose the date of the marriage registration. It was on the twentieth of April, when we came to fill in the application, and we were offered 3 different dates: May 6, May 13 and May 20. I’ve chosen Friday, 13th!”

This is practically all you need to bear in mind, if you’ve made up your mind to get married in Belarus. The only thing that needs clarifying is quite a pessimistic one. 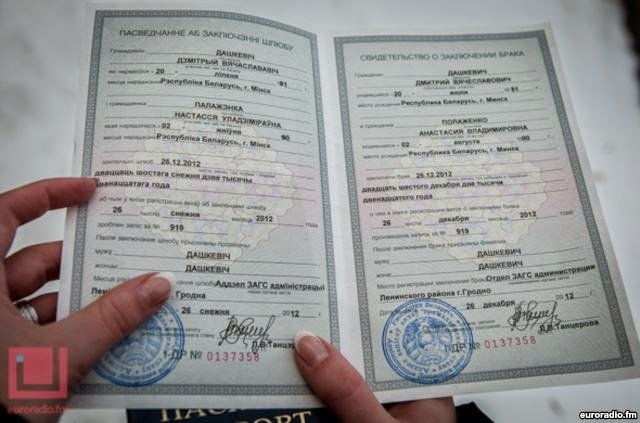 What if you’ve made a decision to get a divorce? The most important info, that can be applied to any country, is that a child becomes a citizen of the country he or she was born in. Only in case you have your residence permit and the passport for permanent residence, you can legally fight for your rights.

After reading carefully through this guide, getting married in Belarus should be as easy as making an omelet. Just bear in mind, that all the procedures will take some time, so be patient and hope for the best.

22 Comments on Marriage in Belarus