The transit of Russian gas through Belarus to Europe is expected to decline, no matter the result of the Russian-Ukrainian gas conflict, mostly because of falling demand from the countries it intended to serve.

Over the past year, the subsidiary of Russia’s Gazprom in Belarus, OJSC Gazprom Transgaz Belarus (formerly Beltranzgas), has increased the overall amount of gas transported to Belarus to 48.8 billion cubic meters, up 10.3 percent compared to 2012. The Russia-to-Belarus segment of the Yamal-Europe pipeline increased its transit volume from 29 billion cubic meters in 2012 to 34.7 billion in 2013, an increase of 19.5 percent. But the section of the system administered by Gazprom Transgaz Belarus that exports gas to Europe saw a drop in transit volumes from 15.3 billion cubic meters in 2012 to 14.1 billion in 2013.

Gazprom Transgaz Belarus exists to provide transit of Russian gas through the country to the European Union market. It is the main supplier of gas to Poland, and until recently the sole provider of gas imported to Lithuania. However, both these countries intend in the medium-term to reduce their consumption of Russian gas, or completely abandon their Russian supplier altogether.

Polish authorities have embraced as a key element for achieving energy independence the use of shale gas. According to estimates made by the Geological Institute of Poland, shale gas reserves in the country range from 345 billion to 768 billion cubic meters. This volume can fully meet the estimated need of gas in Poland for 35-65 years.

In January, San Leon Energy announced that an initial test of the use of a special ceramic sand grain as a proppant (the material used to keep open gas-producing fractures in the fracking process), succeeded in making viable the prospect of long-term gas production near Gdansk. The company, in anticipation of large-scale gas production, intends to continue exploratory drilling, and regards the reserves of northern Poland as comparable to those found in the past decade within the United States.

How reliably these predictions will match reality is difficult to say. However, Poland is ready to facilitate and encourage shale gas production, including through the use of its tax policy. “The (Shale Gas) Taxation Act will apply in 2015,” said Polish Minister of Finance Jacek Rostowski. “However, until 2020, taxes will not be charged. The idea is to motivate firms to pursue shale gas.”

Additionally, the petroleum company Polish Petroleum and Gas Mining (PGNiG), in collaboration with the American major Hagstrom, announced earlier this year that it had discovered a large gas field in southern Poland, within the Podkarpackie Region along the border with Slovakia and Ukraine. Gas reserve estimates currently figure to be several billion cubic meters. First gas from the PGNiG-Hagstrom field is expected in the second half of 2015. According to preliminary estimates, the first year of production will produce 100,000 cubic meters a day. This should contribute significantly to ridding Poland of its dependence on Russian gas as planned by 2020.

In Lithuania, Gazprom’s near monopoly on foreign energy supply, in part the result of the shut down of the Ignalina nuclear power station, will be challenged this year by the construction of a Liquid Natural Gas (LNG) terminal at Klaipeda. The facility should be ready to go online by the end of this year. However, LNG export plants in the United States, figured to be the main replacement source for Russian gas, will not be completed until sometime in 2015. Further delays may result from the fact that U.S. companies must obtain government permission to export gas to countries with which there exist no free trade agreement.

Lithuania is placing its hopes that the U.S. Congress will pass an amendment that will remove trade restriction on gas exports to NATO countries. A number of U.S. politicians believe that a decision on this issue needs to be fast-tracked, as U.S. gas could allow Europeans to reduce dependency on Russian gas, creating the conditions for a more flexible foreign policy by EU states.

Interests do not coincide

A year ago, Russia publicly announced its desire to build a second Yamal-Europe pipeline through Belarus. In his April 2013 address, President Vladimir Putin explained that Russia sought to improve the reliability of gas supply to Poland, Slovakia, and Hungary.

Gazprom enthusiastically supported the proposal based solely on its pragmatic interests. The second pipeline would have brought its gas directly to the border of Poland, improving reliability of supply. Alexei Miller, head of Gazprom, described the gas passing through the new line as “non-transit gas” as the pipeline, despite being situated in the territory of Belarus, would be wholly the property of the Russian company until it crossed the Bug River.

Plans published by the Russian monopoly indicated an expectation that the Second Yamal-Europe pipeline would transport 15 billion cubic meters. It would be commissioned for use in 2018-2019, and become the fourth gas pipeline between the Russian pipeline system and Europe after the completion of the South Stream line through the Balkans. The decision to build “Yamal-Europe 2” was to have been finalized in autumn 2013, according to an announcement by Alexander Surikov, Russian Ambassador to Belarus, that summer.

Today, it is obvious that the Second Yamal-Europe pipeline planned to go through Belarus is unlikely to be started. The fate of the project doesn’t rest with either Russia or Belarus, but rather with Poland. In Warsaw, news of the planned construction of a new Russian pipeline was received ambiguously. 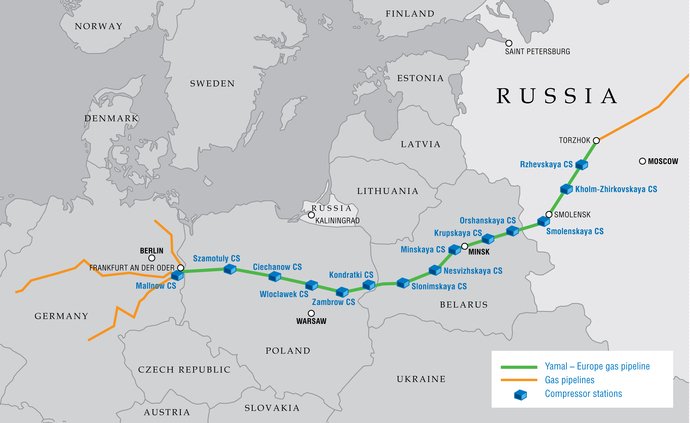 Map of the first Yamal-Europe gas pipeline via Belarus, completed in 1999.

On Apr. 5, 2013, Europol Gaz and Gazprom announced, prior to Putin’s address, the signing of a memorandum for the pipeline’s 2018-2019 construction. Then, two weeks later, Polish Prime Minister Donald Tusk dismissed his Minister of Treasury Mikolaj Budzanowski allegedly over the fact that he did not inform his government about the impending signing of the memorandum.

Later, Deputy Prime Minister of Poland Janusz Piechocinski announced that a decision on the project will be taken only after the completion of a feasibility study. However, he stressed that Poland did not want to become a hostage to any gas dispute between Russia and Ukraine, however much the country was interested in earning revenues from gas transit. That Gazprom proposed the Second Yamal-Europe pipeline mostly to bypass Ukraine in supplying gas to Slovakia, as well as Germany, was not viewed favorably by Poland, according to Piechocinski in February. “We would like to see the Yamal-Europe 2 pipeline completed, but only in the way that it was originally planned, as a line that goes directly to Berlin and Germany,” he said.