Belarus’ former top seeded player in the world was living in an extravaganza this spring, but she is now back on the tennis court.

Victoria Azarenka survived what appears to have been a break-up with her celebrity boyfriend Redfoo (son of Motown founder Berry Gordy, Jr., and part of the dance/hiphop/electropop duo LMFAO), and after recovering from a knee injury, returned to the tour.

SPORT.TUT.BY examined the social media pages of the Belarusian tennis player in order to learn more about how this one-time best-in-the-world (today ranked eighth) spent her spring months (March to June).

After suffering an injury to her left foot that developed in her final sets at the Australian Open (she was eliminated in the quarterfinals by Agnieszka Radzwanska in late January), Vika failed to heal in time for the Qatar Total Open in mid-February. She did get back on the court for the Indian Wells Masters in early March, but was knocked out in the second round by Ohio-born Lauren Wells. The loss was partially the result of her foot not being completely healed, and so the tennis star took “sick leave” for the months that followed.

At first, she became nocturnal during her break. She appears here with her boyfriend Redfoo (and an unknown fan of his) at the LMFAO show at Wynn Resort’s XS Nightclub in Las Vegas on March 8. 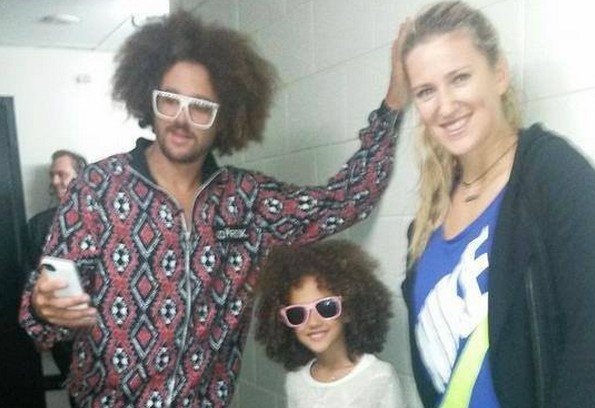 The Belarusian tennis star then flew down under to Sydney, where her 38-year-old boyfriend is one of the most-recognizable judges in the Australian version of the X-Factor reality show/music competition. She gave no hint of when she would return to the court.

Her “selfie” with Australian X-Factor host Luke Jacobz suggests that she had a good time in Australia, even if she wasn’t playing tennis at either Brisbane or Melbourne (locations of the tournaments where she was last fully functional)… 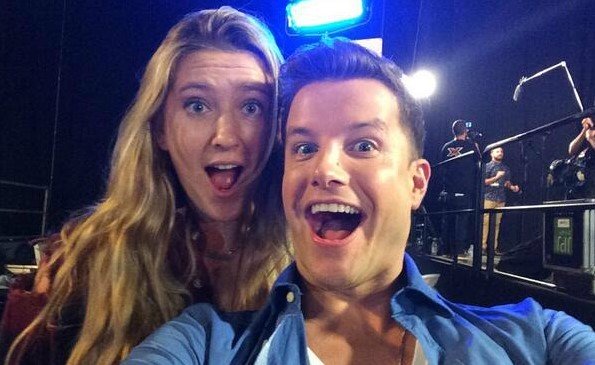 Another selfie, but this time with the stylist of Koso’s boyfriend. At the time that the picture was taken, Azarenka and Redfoo had yet to admit in the media of having broken up. 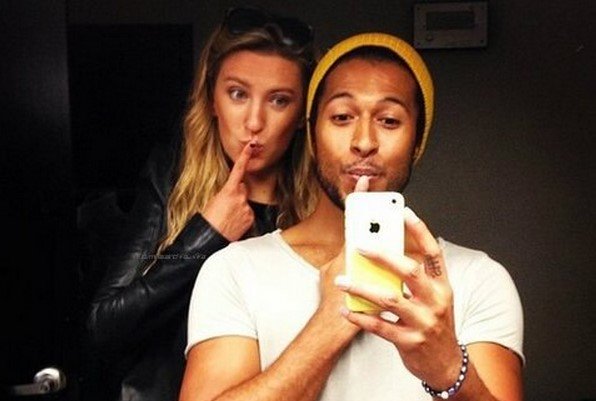 When the separation between the Belarusian tennis star and the famous musician became public in June, Redfoo was nonetheless upbeat. “I think that you know careers are one of the most important things to an individual. Victoria has an amazing career and opportunity to be the next greatest women’s tennis player ever,” he said. “I love my career and music and performing and traveling and I just think that the best environment, the best situation for love, for relationships, is when both people are retired – and that’s what I got to say.”

Around the same time Vika tweeted, “Years go by, and I smile during the game the same as when I started. I love tennis.”

In choosing between her love relationships and tennis, she continues to choose the latter, to the delight of the fans of her talent.

Having split from Redfoo, Vika continued to travel the world. In this photo, she was in Paris, but this time with her family. She’s talking to her toddler nephew here. 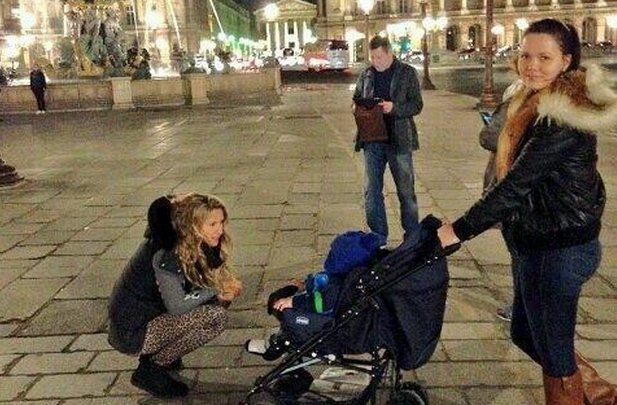 Victoria Azarenka with her young nephew in Paris.

Meanwhile her dog Duke was left all alone in America, on the other side of the Atlantic. Vika spoke her heart about him in an Instagram: “I miss my boy Duke. He does not like when I leave.”

Duke is today one of the main men that Victoria certainly finds to be a faithful and reliable friend. 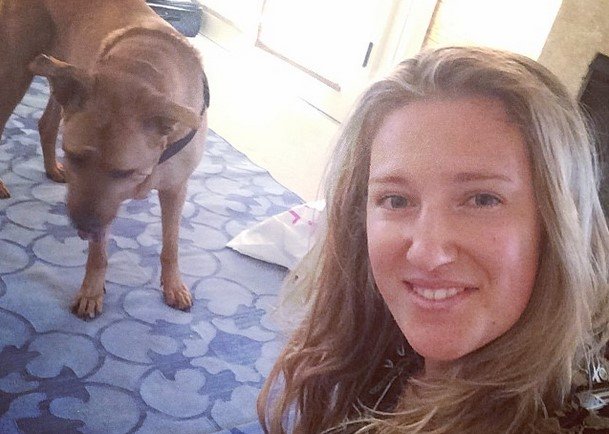 Victoria Azarenka with her dog Duke.

Vika wrote on Facebook: “My coach asked me if I could do stretches or breakdance!” After having gone through the break-up with her boyfriend, who she only met last year, Azarenka began to prepare her body for future trials. First, she began work on exercises to tighten her muscles, and then spent a lot of time in restorative therapy (hiking in cold chambers, etc.) 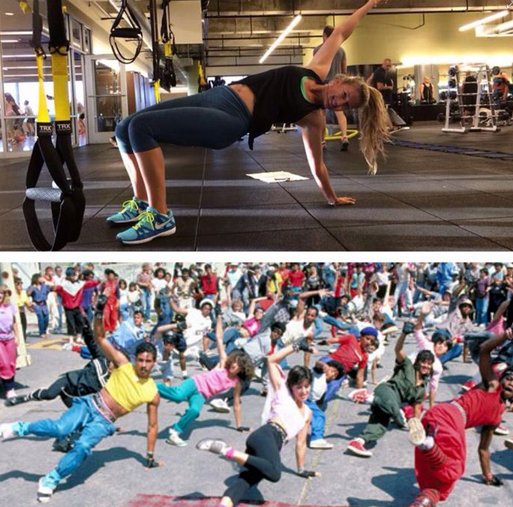 Victoria Azarenka posts in Facebook on her return to training.

She also returned to water therapy. In an Instagram, she wrote: “I’m blue…” 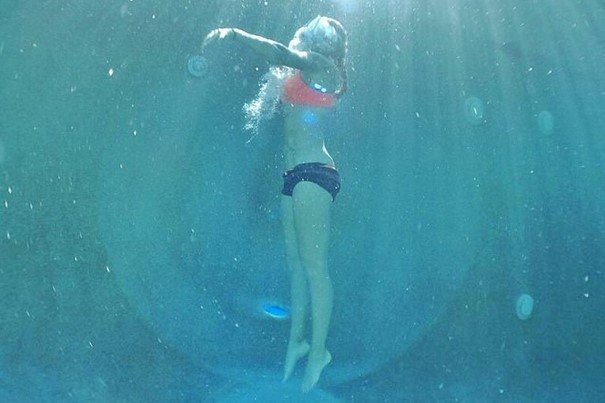 She later posted the next picture in an attempt to look at it all with humor: “And this is what came of it.”  If becoming a mermaid helps her get back to winning on the court, well, then so be it. 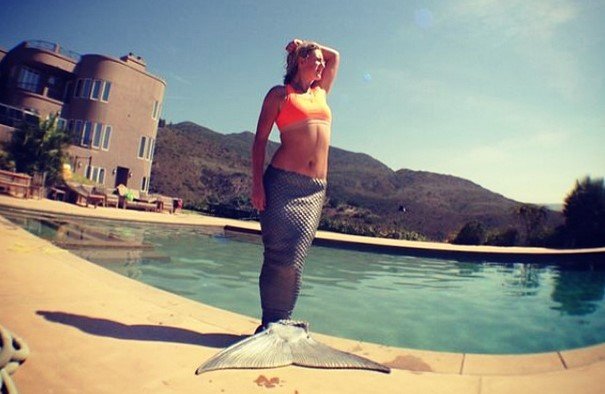 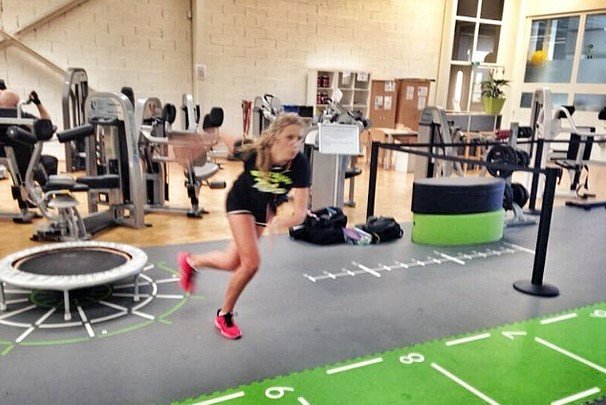 Victoria Azarenka in the gym.

Vika writes in an Instagram: “Jump-stop-and-drops. What an exercise. The day became fruitful!” If so, her training was, however, strained.

In her spare time, Vika has been painting. In a recent post on Instagram: “I think I got a little carried away.” In the painting, she again says hi to Duke. 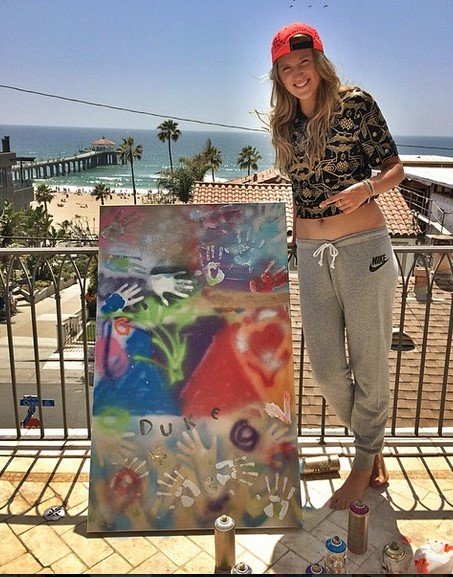 Victoria Azarenka and her latest painting.

The next photo shows Vika at dinner with her girlfriend, Danish tennis star Caroline Wozniacki, in Monaco. Wozniacki, the daughter of Polish immigrants to Denmark, recently injured her shoulder and wrist. Though she competed at Miami and Monterrey, she had to withdraw from the Porsche Tennis Grand Prix at Stuttgart in April to recover. Like Vika, Caro took a significant drop in ranking, falling to 18th in the world after Indian Wells. 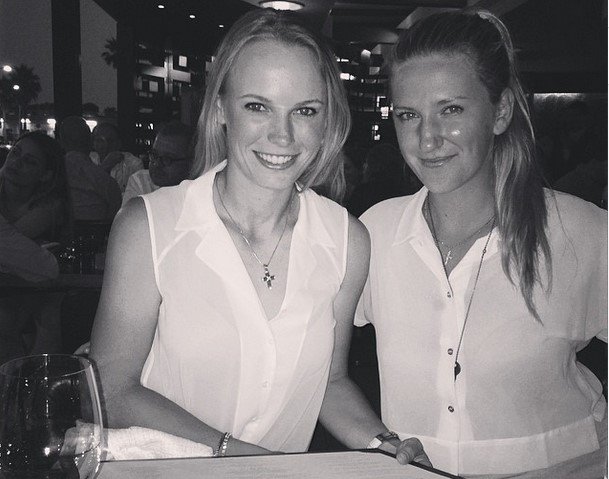 Victoria Azarenka with Caroline Wozniacki at dinner in Monaco.

She later wrote of her love for the tennis ball: “Dearest tennis ball. I miss you so much! Sorry that I had to exclude you and your friends from so much of my life today! Yes, it’s been cruel, but I still love you.” It must be that fans of Victoria, after reading these lines, are in seventh heaven. 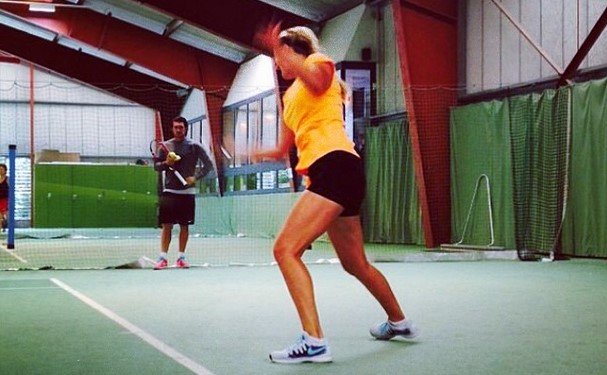 Soon after, Vika tweeted: “Next, Argentina! # WorldCup2014.” After Argentina’s victory over Bosnia (2-1) in the first round on June 15, she had some flattering words for forward Lionel Messi. As of this writing, Argentina has defeated Iran and Nigeria, and will be playing Switzerland next at Sao Paolo on Tuesday, July 1. Azarenka will almost certainly continue to follow the team as it advances. 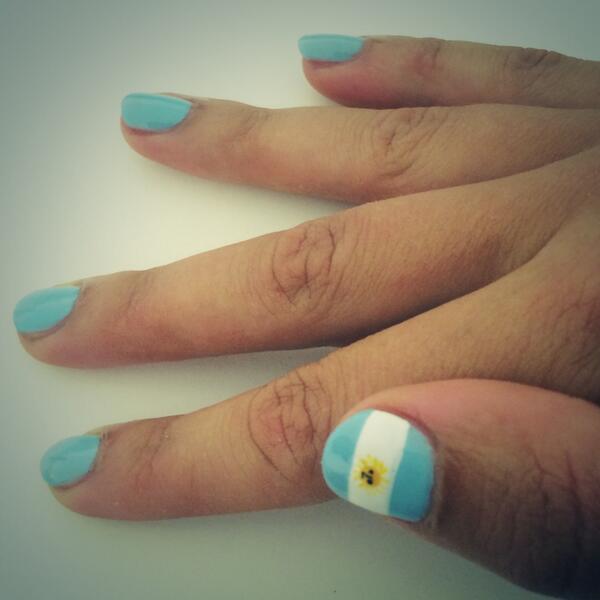 In an interview with the French daily sports newspaper L’Equipe, Vika praised her coach Sam Sumyk for being with her in a difficult period of her life. “Sam was there for me,” the former top tennis player in the world said. “He showed me how to overcome difficulties. And now I am ready to come back. We will be back, together, and back strong.” 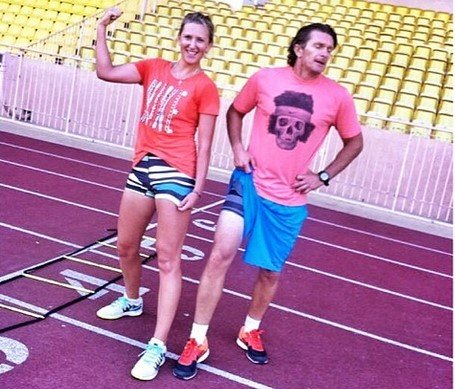 And Sumyk’s tweets even continued to be publicly instructive to the young woman: “Life does not make it easy to know what you want, but you have the courage to do even this.” French coaches, apparently, even teach philosophy. 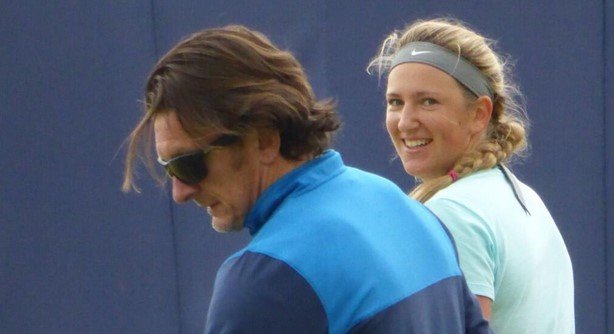 Vika, meanwhile, responded in Instagram: “The only way to explore what is possible is to risk doing the impossible.” Has Sam really managed to direct our tennis star’s boundless energy in the right direction? Will it pay off for us to wait with bright optimism, even if it means sleepless nights? 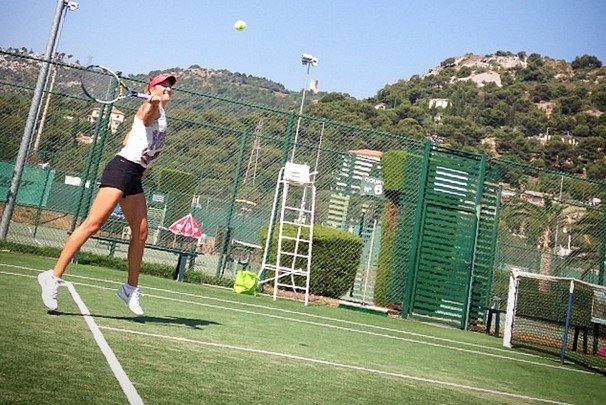 Victoria Azarenka in training on the grass courts.

Vika almost seemed to respond to these very questions in a further Instagram: “Yesterday is but a memory of today, and tomorrow is today’s dream.” It really does seem that the Belarusian tennis star is in good spirits.

On the eve of her return to the court at the Wimbledon Championships, Vika played a warm-up match with Camila Giorgi in Eastbourne. Though she lost in three sets, the Belarusian player remarked: “That’s what I needed. I wanted a competitive match. I wanted to test myself, to spend a lot of time on the court and see how I respond. I am pleased with what I saw. I just need to return to a competitive mode.”

At the party dedicated to the opening of Wimbledon 2014, Vika surprised her followers with a dress that featured an interesting neckline. She also surprised Croatia’s Mirjana Lucic-Baroni in the first round, trouncing on her twice in a row in her first win since January. Although she lost in the second round in a bitterly-fought three sets to Serbian Bojana Jovanovski, she still shined brightly for a player who had to endure such a long period of inactivity.

She’ll next play on July 28 at the Bank of the West Classic in Stanford, California, where she was a winner in 2010. After that, she’ll perform at the Canadian Open, the Cincinnati Masters (where she is the reigning champion), the US Open, and the China Open. If she does well in these, she’ll qualify for the 2014 WTA Tour Championships. We know you can do it Vika! Believe! 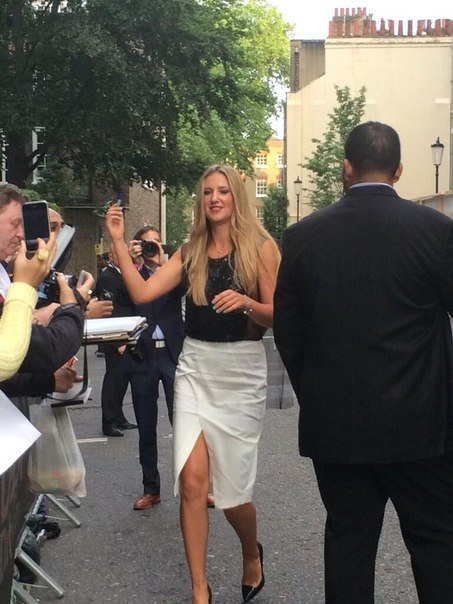 Victoria Azarenka at the opening of Wimbledon.