An Ecuadorian guy speaks about his experience in Minsk 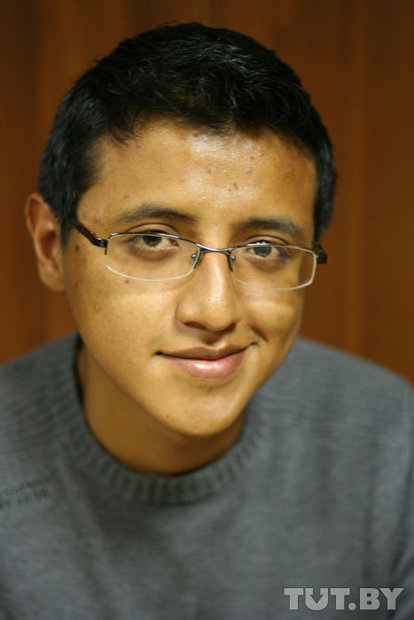 First impressions of Minsk were associated with campus

I never thought about studying abroad, but then I won a scholarship to study in Mexico. This option didn’t mean free education though; I had to pay half. Moreover, I thought about how in Mexico, as with Ecuador, everybody speaks Spanish, and decided against taking it. That’s how the idea to study abroad came. My parents suggested that I consider universities in Russia, Ukraine, and Belarus. As it turned out, in Belarus education is cheap when compared with European universities. So I chose Minsk.

Even after a year of learning preparatory Russian, I still found it was difficult to study in a group of Belarusians at BSTU. Sometimes it was not easy to understand teachers’ explanation. I could not communicate with friends normally and so I just did not hit it off with them. As a result, I was left depressed, and finally I had enough. After consulting with my parents, I decided to change majors from electronics, and I transferred to the economics department of BSU. After that everything went off all right.

In Quito, and in Ecuador in general, we have year-round warmth. Temperature reaches 25-30 degrees Celsius. So, of course, it was hard to get used to the cold winter. When my mom visited me in Minsk last fall, the temperature was about 2-3 degrees. She was surprised that I could live here at all.

My first impressions of the city were connected with the campus where I lived. Unfortunately, it was not very nice. I understood nothing and everybody spoke to me in Russian. Overall, it was a strange experience. But later I got used to it. After a year, I found the opportunity to share a flat with guys from Ecuador.

Minsk is a monotonous city

Minsk is a clean and quiet city, so life here is good. In Quito, a man can come and put a gun up to you and say, “Give me everything you have or I will kill you.” It’s very scary. And even if you have only five dollars in your pocket, it will be taken and you can be killed anyway. But that’s not a problem everywhere in the city. Such things occur only in certain areas.

In Minsk, considering architecture, I find all the buildings are very monotonous. You don’t really notice any difference between the older parts of the city and the modern. Even the suburb of Troitskoye doesn’t really differ from the rest of the city, in my opinion. Everything is exactly the same. In my hometown, things are different. The city center is a historic place. All the buildings there are very old; they have survived to the present day from ancient times. The rest buildings are all modern. On the outskirts of the city there are poor people quarters.

I really like walking in Minsk’s parks. I like Chelyuskintsy Park and Gorky Park. I most enjoy walking there in the fall. Before coming to Belarus, I had never seen such a beautiful state of nature: the play of colors, the yellow and red leaves underfoot… I usually go to the park to read, most often Spanish-language literature. I highly recommend one of my favorite Ecuadorian authors, Jorge Enrique Adoum, who wrote “Between Marx and a Naked Woman.” You need to read it several times to understand the essence of the book.

Also I like the Pushkin Library. There are a lot of interesting events held there. I visit different English-speaking clubs to watch movies in English, and attend various workshops and exhibitions. In Minsk, I use English on the street rather seldom, so it is a good way to practice and do not forget the language. I’ve even attended writing courses in the library. Moreover, you can apply for different foreign online scholarships: best colleges for photography, etc. 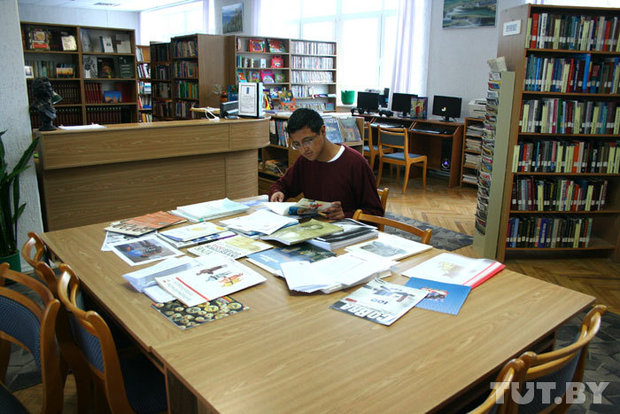 Andres Pancho at the Pushkin library

I like going to the cinema house Kinoteatr Belarus with friends. I really like Belarusian cuisine, so from time to time, I go to the Vasilki restaurant on Nezavisimosti Prospect. In Ecuador, the cuisine is divided into three regions: near the sea, in the center where there are a lot of mountains, and the jungle. Those who live near the sea eat more seafood; in the center they eat corn, potatoes, rice, and even guinea pigs (cuy, a popular species of Andean rodent); and in the jungle they eat river fish and greens.

People in Minsk, at first glance, seem very closed and gloomy. Especially in winter. It takes time to get acquainted with them and gain their trust. An analogy can be drawn between the people and the city, the buildings in Minsk. Until you step into a room, you never know what’s there, if you do not read the signs. In Ecuador everything is open, all the shops, the stores are all in plain sight from the street.

Belarusians seem to become open and cheerful when they are drunk. Drunk men often turn to me in public transport. They like to talk about themselves. We have the opposite: people, when drunk, become irritated and fighting-mad.

I was very surprised that in Minsk churches people do not read the prayers, but rather they sing them. This seemed unusual to me.

In Minsk it is very easy to get a SIM card. In my country, to get a SIM you need to come with a work reference to show that you can pay for a plan. And yes, mobile communication is much more expensive in Ecuador. In Minsk, tech gadgets are 100-200 dollars cheaper than in Quito. So I can buy something here and resell it in Ecuador profitably, even after a time.

The most unpleasant thing that happened to me in Minsk took place in my first year when I was the BSTU student. It happened in the afternoon, during the light of day. Walking near the university, I noticed that four guys about my age were following me. At first I thought that they were just walking in the same direction. But our paths never diverged. When they had almost caught up with me, they yelled that they wanted to wallop me. I somehow dodged their blows and broke into a dead run for dear life, without even a backward glance. It was scary. However, it happened only once. There are much more serious cases in Russia.

But the most open-hearted and good-natured people in Minsk are the babushkas. They always tell how you can get somewhere, and they are always ready to help. I have a neighbor, an old babushka, who constantly asks me about my business, about my parents, and the situation in Ecuador. Because of them, I prefer going by bus instead of riding the subway. People are more talkative there. In the subway people are serious, and everything is rushed. Sometimes I sit on the first seat on the bus and listen to the conversations of babushkas who speak emotionally about interesting things.

I am not planning to stay in Minsk

After graduation, I am going back to Ecuador. I will help my parents. They have a small company for the production of jam, milk powder, and condensed milk. This jam does not go directly to the stores, but rather it is sold to companies producing yogurt, cakes, and various sweets. My mother also works in the ministry of economy and security. In addition to my other duties, I will help her. 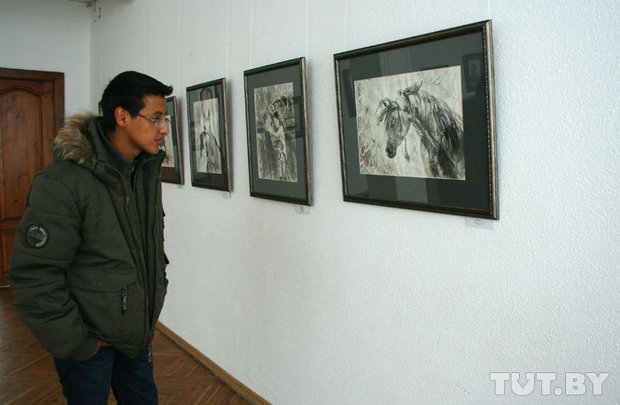 Andres Pancho at the gallery