Since the beginning of the year the Minsk housing market has been in limbo.

If in the previous year buyers and sellers were active, in the last few months they both are in standby mode. The same can be said about the main real estate developers, who have hardly adjusted their pricing proposals from what they were at the beginning of the year. While prices remained the same, though, the supply of apartments is at a five-year high.

June, unlike the preceding months, though, was not so melancholy. Judging from the latest data, market participants have become active again. And as a result, the level of demand for apartments in July surpassed all the months of the second quarter of the calendar year. At the moment, the growth in the volume of transactions, as compared to the numbers in May, is 8.2 percent. For certain, this will increase a further 3-5 percent after final adjustments.

With regard to performance in 2014, the highest number of apartments sold was in February and March. However, there has not been an increase in demand the same as was seen this time last year. In June, the difference between the years was 10.7 percent. There should be no expectations that this trend will reverse next month, because in July 2013 was the peak of transactional activity.

Numbers of offers to sell and buy were provided by the National Cadastre Agency of Belarus via Realt.by. (The number of offers to buy and sell in May were revised. The adjusted average transaction price rose, as a result, by 1 USD / sq. m. Number of rooms were not taken into account in any of the figures in this chart.)

Summarizing the last six months, the demand for this period was far from peak. The amount of people looking to buy a place was down 16.8 percent compared with the first half of 2013, but at the same time, demand was significantly above the worst years. In 2009, there were 17 percent fewer apartments sold, and in 2010, there were 30 percent less.

With regard to the volume of supply in June, apartments for sale continued to remain above the psychological threshold of 7,000 apartments. Between January and April, the monthly growth rate had been 7-8 percent. In May, this figure was already back down to 3 percent, and in June the rate dropped to 0.4 percent, marking the first time in a long time that market equilibrium was established, where demand was roughly equal to the influx of new apartment options. 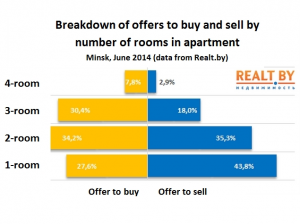 Among the significant changes in the structure of consumer preferences was that 3- and 4-room apartments, for which demand in May did not exceed 20 percent of the total “pie,” began to gradually recover lost ground. Transactions that involved 3-room flats in June made, up 14.3 percent, while demand for four or more rooms increased by 23.8 percent.

June was distinctive in that demand dropped for the most expensive and cheapest apartment offerings. The number of purchase transactions within all 10 of the capital’s districts for the lowest-priced apartments decreased by 5.8 percent, while for the highest priced apartments, they decreased by 27.7 percent from May.  The demand for apartments near the Metro lines generally were unchanged. In short, buyers showed greatest interest in apartments that were within the mid-range of cost.

Average transaction prices between December and May fluctuated within a narrow 20-dollar range, but this slipped a bit in June. The overall decline was 2.8 percent, only slightly less than 50 USD in absolute terms. The last time something like this took place was in November, when average prices decreased by 3.6 percent. 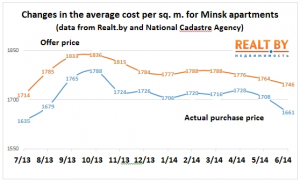 Earlier in the year, the market repeatedly faced the situation where the average transaction price affected changing patterns of demand, even to the point where there was a surge of consumer interest in multi-room apartments within the industrialized Zavodski District, arguably the least appealing area of the city. Such situations artificially pulled down apparent demand from mid-range options. June differed in this respect. There has been a natural rate of decline, not so much apparent in advertising as it would be during bargaining. To keep updated, study The Top 5 real estate trends in 2018 | The Pattisall Group.

The maximum drop in average transaction price was observed in 1-room (“odnushek”) flats. But looking ahead, odnushek owners have reduced prices the least within their ads for sale (on average at a rate of only 0.1 percent per month on the market).

Average prices in June for apartments in Minsk, based on the results of sales transactions, were: 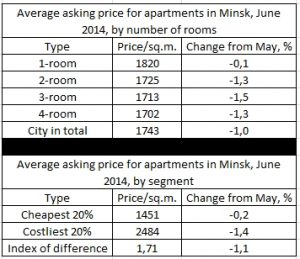 The difference between the average price offers and final deals depended on the number of rooms. Two-room flats varied the least, at 4.1 percent, while 4-room apartments varied by 10.5 percent on average. For 1-room flats, this figure was 6.5 percent. Not once in the past 18 months had there been such a variation between proposed and resulting prices that was this great. 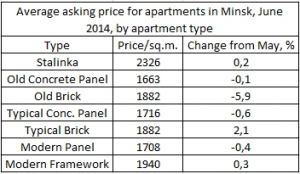 Ads for sales price reductions also were tabulated. For the first time this year, the citywide price listed on Realt.by decreased over the month, by 1.0 percent. Owners of 2- and 4- room flats had lowered prices in ads by an average of 1.3 to 1.5 percent.

With respect to property types, the maximum reduction in prices were observed for apartments in brick Khrushchyovkas (pre-fabricated apartment buildings first built in the Khrushchev era of the 1950s and 1960s, typically 3-5 stories and often today are beyond their design lifespan) and Brezhnevkas (typically larger, with elevators, first built in the Brezhnev era of the 1970s and 1980s). Areas of the city with the lowest prices were led, for the second month in a row, by the Niamiha neighborhood (dropping a further 4 percent in June). 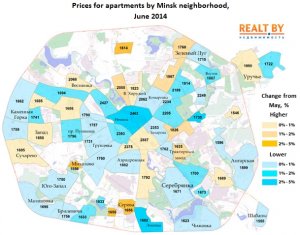 The greatest price drops in June were in the Nyamiha neighborhood, the Loshytsa neighborhood in the south, and a neighborhood off the Botanical Garden near the industrial district.

Nevertheless, about a third of residential areas under construction finished this month, which has led to improved pricing averages in certain areas of the city. The three leaders in increased prices were Novinki (off the Dawhinawski Trakt in northern Minsk just inside the MKAD ring motorway that surrounds the city), Mikhalova (in the westerly Maskowski District), and Siarova (south of the Minsk-1 airfield in the Kastrychnitski District). Price rises were 4, 3, and 2 percent for these areas, respectively. 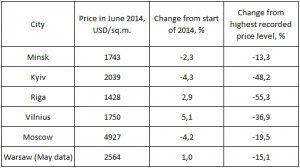 Among nearby cities in Eastern Europe, Minsk was one of two cities that experienced a drop in prices. The other city was the Ukrainian capital of Kyiv. In Riga, the situation remained unchanged while in Vilnius, there has been a steady rise in housing prices in the run-up to Lithuania’s transition from the Lit to the Euro. Over the past 15 months, housing in the Belarusian capital was higher in price than in Lithuania, but in June this situation again reversed. The city with the greatest price rise in June, before the most recent threat of sanctions from events in the Donbas, was the Russian capital of Moscow.

Translated from a report by Artem Saharevich