The Center for the Belarusian Sailing Federation opened during the sweltering first weekend of August. Having been reconstructed from a Soviet-era facility through the work of a public-private partnership, the boats of sports sailors and the yachts of millionaires now shelter in its marina.

Work on the facility was timed for completion to allow plenty of time for the Belarusian sailing team to ready itself for the 2016 Olympics in Rio de Janeiro, Brazil. So far, moorage at the marina hosts some 70 sailing craft, and there are more spaces available for rent. 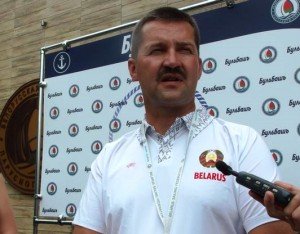 Igor Raczkowski speaks to reporters at the Bulbash Open. Photo via ej. by

On Friday, Aug. 1, the Sailing Federation inaugurated its new center by staging the “Bulbash Open” sailing cup for M Class (“eM-Ka”) yachts on the waters of the “Minskoye Morye” or Minsk Sea, the reservoir north of Minsk used mostly for recreational purposes, upon which the center is located. M Class boats originated in the Soviet Union in 1929, and are still popular in former Soviet countries as an affordable alternative to Western yachts.

In the Open, named tongue-in-cheek for the potato-based slang name given to Belarusians, pitted 14 teams from Belarus and Russia against each other on Minsk voblast’s largest body of water. The preparations were carefully organized by the Federation, funded and overseen by several wealthy Belarusian businessmen who plan on spending large amounts of time at the new yacht club. 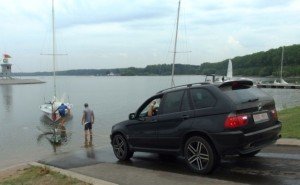 Getting the boat into the water. Photo via ej.by

From inglorious past to glorious future

Two years prior to the opening, the land around today’s Sailing Federation center was cordoned off as a VIP recreational area. For years, it was a bushy shoreline situated on a children’s sports school’s reserve for Olympic-style sailing that organizers were trying to restore to some semblance of its earlier glory, even going so far as to offer horse and wagon rides for the children of Minsk’s elite. The spot had, for years, been a gathering place for the “bratki,” the mafia-like business leaders who offered “krysha” or protection for smaller business owners in the 1990s.

When President Alexander Lukashenko stepped in, and with the help of 5 million USD from designated investors, oversaw the formation off the Bulbash company, the exclusive but seedy area was transformed into the modern Olympic training center that now occupies the site.

“We had one Sailing Federation Olympic training center, small offices in Homyel and Hrodna, and that was all,” said Igor Raczkowski, the first vice president of the National Olympic Committee. “We had here only children using 20-year-old boats that had been written off.” 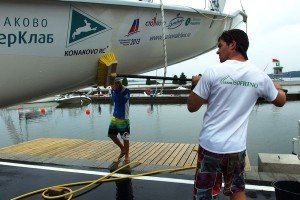 Yachting decals show that its an active sport, but also an expensive one. Photo via ej.by

President Lukashenko supported proposals for accelerated development of the Federation, and this changed everything. “We went and purchased 200 yachts,” Raczkowski said. “No other country had purchased so many in such a short time. When we went to the European Sailing Federation (EUROSAF) Congress in Andorra to buy boats, they asked us (just to be sure) whether we meant 200, or 20.”

The Sailing Federation center still maintains buildings from the children’s sports school, with guest suites designed for children, athletes, and coaches, as well as the original administration building and restaurant. There are plans to install new bathing beach equipment and to construct a hotel for visitors. Once these are in place, it is anticipated that quite a number of Russian visitors will gladly visit their western neighbor, all ready to rent a yacht and sail on the Minskoye Morye. There will also be options to simply ride on a yacht with an experienced skipper, and to learn how to operate one of these craft. Again, mooring space still is available for private yachts in the center’s marina. 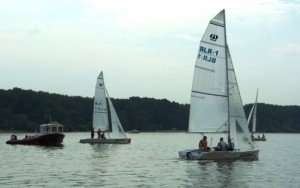 200 boats were purchased for the Belarusian Sailing Federation center on Minskoye More. Photo via ej.by

Among the 200 sailing craft acquired by the investors for the center were boats for teaching children to sail, such as 2-person Cadet class children’s training dinghies, cat-rigged Optimist yachts, 3-4-person eM-Ka Olympic-style yachts, Laser Standard sailboats, and Laser Radial sailing craft. According to Raczkowski, the “complete package” eM-Ka costs about 25,000 EUR, while Laser Radial rigs are priced at 6,000 EUR. The least expensive children’s boat costs about 1,600 EUR a piece.

Sailing is a high-maintenance sport. “Sales are a very expensive part,” said Raczkowski. “They should be changed every year because they stretch and do not keep their shape.”

Beyond investing in the sport, a person should be ready to travel: fans typically follow an international regatta circuit, and if they present credentials showing that they can navigate a sailing craft, they can rent boats when going to clubs on the Baltic or Mediterranean seas. The plan is to exchange visits with tourists from other countries.

“In marinas around the world, we want to see Belarusian flags,” said Raczkowski. “There was no infrastructure, no place to go. Boats that had sailed on the Minskoye Morye began to find their way to moorage in places like the Palma de Mallorca. Meanwhile, the owners may only be able to go to their boat for 2-3 weeks out of the year while it is down there. If they have a boat up here, they can go out on the water every day.” 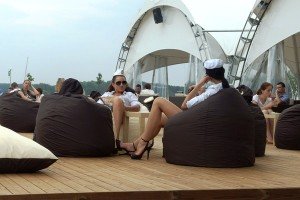 Dockside at the Bulbash Open proved a relaxing experience. Photo via ej.by

In the near future, the Sailing Federation hopes to interest all of Minsk in the sport. “I’ve never seen anywhere where there was such accessibility,” said Raczkowski of the new center’s location. “It’s only 20 minutes’ drive from the center of the city to a modern yacht club. People from Moscow, or even Kyiv, say they do not expect this in Minsk, in terms of infrastructure and functionality.”

The center is not just for boaters, Raczkowski noted. “Even if you just want to soak up the sun, you can pay your money and get a locker key,” he said. 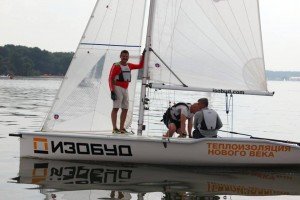 The location will also be put to use all year, even for winter sports, again thanks in part to the support of the President of the Republic, and the Chairman of the Minsk voblast Executive Semyon Shapiro (who until last November held the gubernatorial post in Hrodna). “We plan to put a bicycle lane around connecting us to the rest of Minsk,” Raczkowski said of the concept that was developed by the two politicians. “We plan to do bike rental, and in the winter, cross-country skiing.”

However, Raczkowski’s vision, as possible future head of the Sailing Federation, envisions drawing greater prestige on the Belarusian capital. “The waters of the Minskoye Morye meet the conditions for the ISAF (International Sailing Federation’s) World Sailing Championships, which is what we strive for,” he said. “In 2016, Minsk will host the EUROSAF Congress, and for 2017, EUROSAF President Marco Predieri wants to place the EUROSAF Youth Sailing European Championship, which involves 49 countries. Such an event should be held on the Minskoye Morye.” 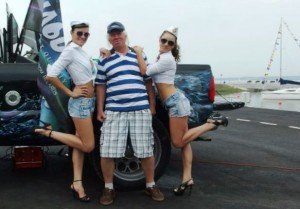 Meanwhile, members of the Belarusian Sailing Federation have set their sights on the Semaine Olympique Francaise (SOF) regatta at La Rochelle, France, set for Sept. 22-25. The event incorporates a number of larger yachts and sailing vessels, many of which are based in the Mediterranean. Raczkowski himself hopes participate as a crew member aboard the Belarusian-flagged Isobud, a company-sponsored eM-Ka yacht that participated in the Bulbash Open last weekend.

Beyond EUROSAF, of course, the country is paying attention to yachting in order to prepare a competitive sailing team for Rio 2016. “Our task is to obtain four spots for the Rio de Janeiro Olympics and really compete for prizes,” said Raczkowski. “Our guys have every chance.”

Families who come to the center by bicycle will hopefully not face the harsh reality adopted in Russia. According to one veteran Belarusian sailing coach, Vladimir Ivanov, Russian sailing clubs that are situated in suburbs all have “real barriers and they will not let you pass without a permit. It’s all very expensive and only for their own.”