Artur Rozhkov proudly announced that the Belarusian Federation of Golf has just become a full member of the International Golf Federation (IGF). During a recent press conference, he spoke about what this means for Belarusian masters of the game, and named off members of the men’s national team. Among those who will take to the green for Belarus are a renowned hockey player and the nephew of a former foreign minister. 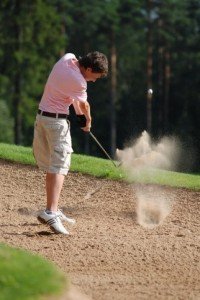 Becoming the latest member of an organization that had already included 132 member federations from 126 countries, the Belarusian Federation, led by Rozhkov, can now open doors proactively for the sport’s enthusiasts. They will hold championships under the IGF’s aegis, sponsor participants to international tournaments, and work with colleagues from neighboring countries. Members of the Belarusian Federation of Golf will also be recognized by the country’s National Olympic Committee.

When the Federation opened a specialized golf course equipped to international standards, it sent a formal request for membership to the headquarters of the IGF in Lausanne, Switzerland, and they accepted. There was a time factor involved, as Golf will be featured as an Olympic sport at the XXXI Summer Games in Rio de Janeiro in 2016. This will mark a return for the sport to the Olympics, the first since the 1904 Summer Games (the third Olympiad at St. Louis, in the U.S. state of Missouri). As a result, Belarus regarded the development of a national golf federation as a priority.

“We were able to form a national team,” said Rozhkov. “It will include Sergei Martynov, Igor Alkhimovich, Vlad Nalibotsky, Vadim Begun, Georgy Prigozhy, and Andrei Mezin, and as the captain of the team (appointed by the Secretary General of the Federation) Alexander Ustinov, who is already working on the timetable for preparations for the Olympics. They will, of course, be held in two years. Our competition venue will be finalized and announced this September.”

This list boasts two notable personalities. Martynov is the nephew of Sergei Martynov, former Belarusian Ambassador to the United States (1993-1997), Ambassador to the EU and NATO (2001-2003), and Foreign Minister of Belarus (2003-2012). Mezin is a hockey goaltender for the KHL team Traktor Chelyabinsk who also plays for the Belarusian national team. 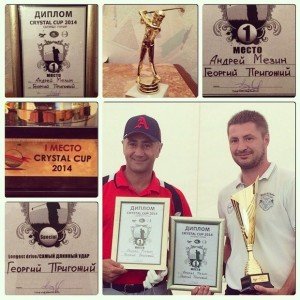 “Businessman Georgy Prigozhy and famous hockey goalie Andrei Mezin are both progressing well as players,” said Ustinov. “The boys took first place in the doubles tournament during Crystal Cup 2014. I understand that Andrei is not yet finished with his hockey career, and that for him hockey remains his priority. But Mezin happily agreed to join our team. During the summer off-season, he practices almost every day on the course, improving himself. It was because of this, and not political pull, that he was able to get on the team.”

“On the margins, we have another hockey player, Vitali Koval (goaltender for KHL’s Torpedo Nizhny Novgorod, and 2011 goalie for the Belarusian National Team), but apparently he is not yet ready to seriously compete in our sport.”

In the Belarusian Federation, the chance of someone immediately breaking into the top levels of world play is unlikely. Most of the golfers only began as adults. When looking at Belarus’ neighbor, Russia has no one in the best thousand players in the world, even after 20 years of hosting an active federation with highly competitive tournaments. Team alternative Felix Zamudio, who naturalized in Belarus from Argentina, has played at the last two national championships, but he is not quite to the best thousand in the game. Still his moments of success at the international level make it possible for Zamudio to find financial rewards for his talents.

Federations are sponsored entities rather than planned organizations that employ talent as “labor” on the golf course. This is the philosophy followed by the Belarusian Federation. To this end, a year after the foundation of the Minsk Golf Club, a junior school was created. It is also expected that the national team will practice on a small field dedicated for their use.

Meanwhile, the Federation is preparing a program to promote golf in Belarus, one that will deeply penetrate public life. This program will be directed by Konstantin Sokol, who is described as something of a golf celebrity in Belarus (Belarusian media reports suggest that he won the “Russia Cup” in 2007). Through the program, the Federation will look to the future by developing child stars, like 12-year-old Mikhail Martynov, who has been playing golf for the last four years. Regular practice allows him to compete with older golfers today, and it’s believed he will make a name for himself over the coming decade.

According to a representative of the Russian Golf Association, Alexander Kochetkov, the cost of preparing young golfers and young hockey players are comparable. At a minimum, outfitting either sportsmen would cost roughly 600 USD.

“Our pricing policy should be reasonable,” said Rozhkov. “The cost will be 250 USD for six classes. This should be set purely a symbolic gesture in order to attract more athletes. As they mature, they will either form the backbone of the team, or they will continue to spread the word about the pleasure of the sport. To this end, the Golf Club will work together with the Ministry of Education and Sports.”

“Relationships with adults are always easier to build, as they are based on market conditions. To attract them, for instance, we should charge no more than 100 USD per game, as they do in the Baltic States and Russia.”

According to Rozhkov, the creation of the Minsk Golf Club also will spur the creation of a national women’s team. “Women especially regard convenience as important,” said the Belarusian Federation of Golf director. “But if Belarusians go to tournaments elsewhere, electing to pay for travel with their own funds just to take part, we will need to hurry on resolving this issue.”