Polytechnical institutions come in all shapes and sizes the world over, and the education they confer ranges from simple vocational training to high caliber engineering and applied science curricula. In Belarus, the leading institute of technology is situated in Minsk, the Belarusian National Technical University (BNTU).

Known for its signature green and white portico fronting its main building, and perhaps the Kremlin-like tower that extends up from Dormitory No. 4 over Praspekt Nyezalyezhnastsi, BNTU is to Belarus what the Massachusetts Institute of Technology (MIT) is to the United States. The institute has contributed two of the current leading academicians to the Belarusian National Academy of Science, located almost directly across the street. Additionally, the university boasts among its alumni leading Nepalese businessman Upendra Mahato (president of the Russia-Nepalese Chamber of Commerce and Industry, Honorary Consul General of Nepal in Belarus, and 2007 recipient of the Business Manager of the Year award given by the Federal Assembly of the Russian Federation), Vietnamese academician Ngo Tuan Kiet (Director of the Institute of Energy Science with the Vietnamese Academy of Science and Technology), and the present First Deputy Prime Minister of the Republic of Belarus Vladimir Semashko.

As its American counterpart, BNTU seems to convey a more fun-loving cultural life than its more prestigious neighbor, BSU (which finds its closest American analog in Harvard University). Thus far, the Ig*Nobel Awards are confined to the Massachusetts side of the Atlantic Ocean, but BNTU nonetheless hosts festivals that a casual observer would not think to look for in a technical university. These include the annual “Spring BNTU” creative works event, the “Muse in the Technical Interior” poetry and song competition, and concerts by international artists like the Vietnamese Pop Vocal Ensemble. Meeting the engineering and technical needs of Belarus

In the chaos that followed the creation of the Byelorussian Soviet Socialist Republic in July 1920, the fledgling government identified the strong need to reconstruct buildings, roads, and infrastructure following the removal of Polish forces, the last of a long string of invaders that took advantage of a relative vacuum of power following the abdication of Tsar Nicholas II. A smaller Minsk Polytechnical School had operated that fall to train specialists for reconstruction of the country, but this was eventually seen as not enough.

On Dec. 10, 1920, the new Byelorussian state approved the transformation of the polytechnical college into the Belarusian Polytechnical Institute (BPI), a university-level school, under its first rector, Nikanor Kazimirovich Yaroshevich. An agronomist who later taught at the college, Yaroshevich set about organizing a staff of 50 teachers to teach 305 full time students, and cover courses for 119 preparatory students. In addition to the mechanical engineers, the first specialty group he organized into a faculty, he also set up faculties for civil engineering, culture and technology, chemical technology, and electrical engineering. However, he was soon removed to Central Asia because his personal political activism ran counter to the goals of the state (he was later shot in 1937 on trumped-up charges that he had spied for “foreign intelligence services”).

Between 1922 and 1933, BPI was shut down, but the need for trained technical people remained strong. In July 1933, the National Soviet Committee finally agreed to re-open the polytechnical institute, and that September, 120 teachers were divided into 20 departments in order to train 1,200 students. A year later, the less contentious Ivan Druzhelovsky took over as rector. Between him and his successors, Dmitry Gorin and Samuil Poznyak, the institute trained some 2,000 engineers in seven specialties, and employed 120 teachers and 20 departments, before the Nazi German invasion.

During the Nazi occupation, BPI again went dormant. Classes were reconvened under Rector Poznyak only after the war ended in 1945. Before the war, the school had become one of the leading institutes in the Soviet Union. After the war, the number of students dropped to a paltry 375. However, the institute rebounded quickly and by 1949, the class size reached 1,500, with more than 160 teachers teaching in 37 departments.

In 1947, Poznyak stepped down as Rector and was replaced by Mikhail Doroshevichi, who presided over BPI at the time of Joseph Stalin’s death. The polytechnical institute was renamed in honor of the late leader. Throughout much of the rest of the Soviet period, the school merely set about the business of producing technical and engineering specialists. In 1965, Rector Pyotr Yashcheritsyn presided over the institute’s first graduation that included foreign students.

In April 1991, the Byelorussian Polytechnical Institute reorganized itself as the Belarusian State Polytechnical Academy, which remained the school’s name through the break-up of the Soviet Union. Not long after, the attachment of Stalin’s name to the academy fell into disuse. In April 2002, the academy was renamed one last time into what it is known today, the Belarusian National Technical University. It has so far trained over 170,000 specialists since opening its doors nearly a century ago. A look at life on the BNTU campus for foreigners

Today, BNTU remains the second most common destination for foreign students coming to Belarus. As one of three percent of the world’s universities rated by the QS World University Rankings, it receives the occasional Western applicant. Indeed, its web pages are well-represented with English-language content.

The specialties offered today match the needs of both developing world and developed world, and training in them normally lasts 5 years. The few graduate students that continue on to their post-graduate degree typically do so in the space of one year. Students have the choice to pursue technical training in automobile and tractor technology, mining and environmental engineering, mechanical engineering, mechanical technology, marketing and management and entrepreneurship, power engineering, information technology and cybernetics, technology management and humanities, engineering pedagogy, power plant construction and engineering services, architecture, civil engineering, instrumentation engineering, transportation communications, military technology, and sports technology. Courses for its nearly 19,000 students are offered on the main campus in Minsk (Metro Akademiya Navuk), at a second campus at Soligorsk, and through distance learning. BNTU affiliates itself with IHSIT-CD, Erasmus Mundus, and TEMPUS.

The BNTU technical library maintains access to more than 2 million volumes. The IRUE Science and Technology Park provides an avenue of collaboration between the institute and the private sector.

On campus living takes place from 15 dormitories situated on the campus. Still, a large number of students live in off-campus housing, many commuting by metro. Sports and recreational facilities are provided on campus, as is a wide range of cultural activities. A lyceum provides preparatory courses, and daycare is provided. A driving school operates on campus. 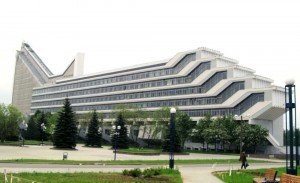 NTBU Building No. 15, the so-called “Ship Building,” nicknamed because of its shape. Photo by Wizardist via Wikimedia Commons

How a foreigner can enroll at BNTU

Costs are typically very low, compared to Western prices, with tuition running about 2,800 USD per academic year. However, the student needs to know Russian fluently. Students not meeting the minimum acceptable level in the exam provided by the Rector’s University Commission will have to go through language preparatory courses until that minimum level is reached.

The first step in getting into BNTU is to apply for admissions. To do this, the student must submit a certified translation and copy of their passport; certified translation of their transcript (showing both subjects taken and grades given); a certified translation of any prerequisite degrees (such as for post-graduate work); medical certification showing that the student does not have any problems studying in Belarus’ normal living climate and does not have any diseases that disqualify the student from entering the country (HIV, tuberculosis, etc.); a completed application form (in Russian); and 10 passport size photos. Further documents may be required, so this packet should be sent early. But in it, there should at this point be enough for the university to issue a letter of invitation for the student to obtain a visa for entry into Belarus.

Once the invitation has been issued, the next step is to obtain a visa from the Belarusian embassy in the student’s country of residence. Before entering the country, the student will likely have to pay for state-recognized health insurance.

Once this is done, the next step is to travel to Minsk and be ready to submit original documents for which translations have already been submitted. If the language exam is completed satisfactorily, the student can register for courses. If not, preparatory language courses will be required. Once completed, the certificate for preparatory department graduation that will be awarded can then be submitted to allow for retaking the exam.

Once all these steps are completed, the student will be given a contract for training to sign, and will pay all appropriate tuition and fees. Foreigners should remember that they are required to apply for registration with the local police station’s “pasportny stol” within three days of arrival. Registration typically takes 10 days, and is only given after showing documentation verifying the student’s good health.