The culture of Belarus bridges the everything-in-its-place freedom of Northern Europe with the anything-can-still-happen imposed order of Eastern Europe. Along the frontiers of such complex expressions of human nature can emerge unique influences upon the soul of the people that live there.

The Belarusian State Academy of Music (BSAM) has operated in this one-of-a-kind atmosphere since the height of the pre-War Stalin era. As an important source of inspiration to the republic, it always enjoyed room to grow given it by both Soviet and post-Soviet governments, and today the academy maintains a strong international reputation and enjoys broad recognition within Europe as a center for “professional music education, performing arts, composer creativity, and musical educational activities.” Indeed, BSAM has been at the center of modern Belarusian music culture since its inception. 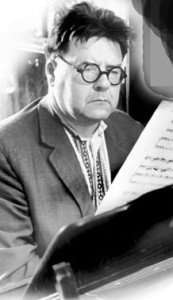 The rise of the modern Belarusian music institution

In Autumn 1932, just when the general atmosphere of the USSR took on a more repressive and fearful nature under strongman Joseph Stalin, in Minsk the all-powerful Communist Party announced the creation of a new State Conservatory. On Nov. 15, the first class admitted 40 students under the direction of Rector M. Kazakov. Instructors from the top-notch music conservatories in Leningrad and Moscow were brought in to teach, highlighting the importance of the project. Following the December 1933 death of Anatoly Lunacharsky, the former People’s Commissar of Education who had passed away in the south of France while en route to his first ambassadorial posting in Spain, the school adopted the deceased cultural authority’s name, becoming the Luncharsky Byelorussian State Conservatory early in 1934.

Among the first students of the new academy, the graduating class of 1937, were such important names in Soviet music history as Anatoly Bogatyr, a leading figure in modern Belarusian orchestral composition who would serve as Rector of the conservatory in the 1950s; Pyotr Podkovyrov, celebrated composer of sonatas for viola and piano; and famed music writer Vasily Yefrimov. Among the first instructors were Vasily Zolotaryov, a student of Rimsky-Korsakov himself; Nicholas Aladov, an important Soviet music educator who would become the first Rector of the conservatory after it returned to Minsk in 1944; and Bronislaw Smolski, the Belarusian musicologist whose son Dmitry likewise went to the same music academy to become a composer, and whose grandson Victor went to Germany to become the guitarist for the heavy metal band Rage.

Two rectors held the post for 20 years, and the first was himself an early graduate of the conservatory. Vladimir Olovnikov studied to become a composer before the war, and returned to his alma mater in 1962 to oversee the creation of even newer composers, musicians, and other important figures in the world of music. When he left the academy in the hands of fellow music writer Igor Louchenok, author of a large number of works for orchestra and film, the Brezhnev era had run its course. Louchenok’s term in office was much shorter, and when Mikhail Kozinets succeeded him, the succeeding instructor’s rise to the position coincided with the rise of Mikhail Gorbachev as the last leader of the Soviet Union.

Kozinets, however, being the other rector to hold the post for two decades, would easily outlast Gorbachev in his posting. Indeed, it was under his watch that the institute would change its name, first dropping Lunacharsky from the institute’s title in 1992, and then transforming the Belarusian State Conservatory moniker to that of the Belarusian State Academy of Music in 1997. Despite the many changes that took place around the academy following independence, though, BSAM continued to produce consistently high quality professional musicians and music specialists through an ever increasing number of specialty divisions. Indeed, in 2000, the academy was recognized as one of Belarus’ leading institutes of higher learning.

In 2005, Alexander Roshchupkin accepted the helm of BSAM. His five year term saw an increase in international recognition for Belarus’ leading music school. In 2009, the school garnered global attention when it collaborated with the International Musicological Society to host a symposium on the science of music, raising its reputation among the world’s leading institutions. When the present rector, Catherine Doulova, succeeded Roshchupkin, she was well-placed to attract international students to the music school. 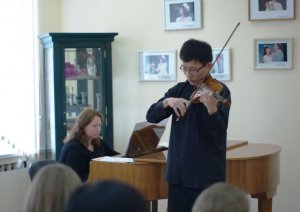 Music pervades every aspect of life at BSAM. Photo via BSAM photogallery

A look at life on the BSAM campus for foreigners

BSAM has concentrated its recent efforts to attract foreign talent to its program, and as a result, of the 1,200 students enrolled at this elite Belarusian music school, 200 are from other countries, such as Belgium, Slovakia, Turkey, Iran, the People’s Republic of China, and various former Soviet countries. Even American students have attended courses here in previous years. Although a branch of the academy exists in the eastern city of Mahiliou, most of the foreign students attend studies in Minsk. The school, meanwhile, maintains bilateral agreements with institutions in 40 different countries.

There are at present 22 undergraduate divisions that cover 13 specialties and 27 sub-specialties in music studies. These are divided between five departments: Piano, Composition, and Musicology; Vocal and Choral; Orchestra; Folk Instrument; and Advanced Training and Retraining. Graduate studies are also offered at the institution. Orchestral and instrumental students may bring their own instrument to Belarus (pay close attention to customs declaration rules), but there also exists for classroom study a high quality collection of loaner musical instruments. It should be noted that the 17th century Italian violin crafted by Andrea Guarneri held on display at the academy is not among the instruments available for students to practice on.

BSAM maintains two historic buildings in the city which house not only classrooms and the sheet music and recordings library, but also the large concert hall and chamber music hall. Housing is typically off campus, but for a full range of available living options while studying at BSAM, students are encouraged to contact the academy’s division of international relations (international@tut.by). 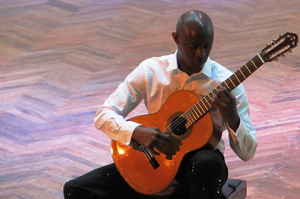 The study of the science of music theory plays a prominent role at the university, and research conducted by both students and staff are regularly published. Further the academy collaborates regularly with a number of professional organizations like the European Piano Teachers Association, the UNESCO International Music Council, and the World Cimbalom Association (the leading professional organization for players of the regional version of the hammered dulcimer). 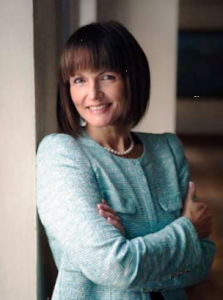 How a foreigner can enroll at BSAM

The procedures for entering BSAM are generally the same as entering most any other Belarusian institution of higher learning, even if their entry procedures are not published online. Typically, university-level schools require the following: (1) appropriate pre-requisite diplomas or certificates and academic transcripts; (2) passport that will be valid through the duration of studies; (3) state-issued birth certificate; (4) student medical certification considered valid by Belarusian authorities, as well as certification of HIV testing showing that the applicant is HIV-negative; and (5) any certification that shows fluency in Russian (though this fluency will be tested prior to entry). All documents must be accompanied by a certified translation into Russian. A school-specific application can be expected to be issued (this must be filled out in Russian), and the student may be required to provide a certain number of passport-like photos (the specifications and number of which will be given by the institution).

After the initial submission of materials and admissions screening by the institution, the admitted student will generally receive a formal invitation that can be used to obtain a visa from the Belarusian embassy that services the country from which the student originates. Travel arrangements, once made, should be forwarded to the institution to coordinate arrival. Once in country, the student will generally be required to undergo a medical examination and register at the “pasportny stol” of a specified police station within three days.  After testing for fluency in Russian (failure of which will likely result in having to take preparatory courses before the intended studies can begin), the student will be required to sign a contract for instruction and pay tuition (in 2014-2015, the cost was between 6,000 and 7,000 USD for international students). After that, the student can start attending courses.

For the actual procedure that applies to BSAM, though, it is advised that interested applicants contact the International Relations Division of the academy at international@tut.by