Sometimes people describe Belarus as the “blue-eyed country,” in honor of the lakes that seem to stair up at the skies like blue eyes from a forest. Ei JunGue perspective on the country, though, is slightly different.

“When I came here, suddenly I was so happy landing in Belarus, the sky is blue, the nature here is so beautiful,” said Ei, who goes also by the name Jun Lee. “The skies, I don’t know why, they just made me happy.” 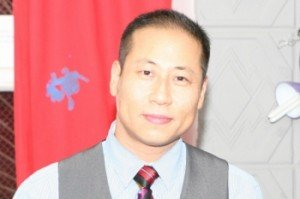 On Sunday, July 13, from noon to 9 p.m., Ei, an Australian philanthropist of Korean ancestry, will share part of this happiness when he unveils his master work of social projects aimed at the development of talent and self-expression in Belarus. That work will be Blue Sky’s “time café”, called Dom Talanta (Talent House), a refuge of artistic creativity set in a factory loft in an aging building owned by Bel-Swiss Bank. This revitalized working space was put together not only from his own vision, but also that of the community of people dedicated to social improvement in Belarus with which he has surrounded himself. It is situated, almost defiant of its surroundings, in an aging industrial neighborhood near Minsk’s Ploshcha Yakuba Kolosa, or Jacob Kolos Square.

In part, this project, the latest of three similarly purposed entities, was spawned by Ei’s own unfulfilled desires to teach art for a living. “My mother is incredibly artistic,” he said. “She was a high school teacher and she introduced me to a lot of photography. She sent me to an art school, I think when I was 5 years old, for a year. Just the enjoyment of going to this small arts school, it created the initiation for me to have some kind of ‘like.’ To like something, you have to try it.” 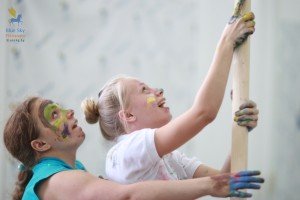 Ei felt forced by an obligation to please his father to go into engineering, but despite his childhood desires, he excelled in the field, and made a very good living for himself. Still, he wasn’t happy for the nearly 30 years he was involved in it. Eventually, though, he found a way to pursue what he wanted from life. “In the end,” Ei said, “you can still accept what your responsibilities are, and still change to what you want to do, if you have imagination.”

Ei teamed up with a young economist from Minsk named Margarita Malyshchyk back in 2012 during a period in which he was earning a living while scouting for engineering talent. While in Lithuania, he met the young Belarusian who was fluent in Chinese. Though his original interest was in using her linguistic skills in China, through her he became enthralled with her relatively isolated Eastern European homeland and its incredible pool of untapped talent. He made the decision to relocate to Minsk and set up what at first was to be a charity, but then later became a social responsibility-oriented talent company.

“We spent pretty much two years doing charity projects,” said Ei. “We didn’t know many charity agencies during this time, and looking for them online was very difficult. I had a whole team looking for charity partners. I didn’t want to reinvent the wheel.”

While setting up the talent agency, which was intended to draw talented people in to help with charitable causes, he sought assistance from law firms to start up a non-governmental organization (NGO), but oddly enough, Ei found that some of the biggest law firms here just didn’t have enough experience to set up an NGO, and often gave incorrect advice.

“From what I understand, it’s not so difficult (to start an NGO),” said Ei. “People do start up their own charities and NGOs here, regularly.  It’s not difficult, you just have to do your research and find the right information partners. But for our activity, which was talent-based, using talent for doing social good, that’s what we are doing for Blue Sky, it needed to be a company.”

For Ei, this is something of an experiment, a real-world lab in doing good through charitable causes. “Belarus has the resource, it has the ground to practice all of this, and model all of this into a good program,” he said. “But it’s not just for here. This is where I can try it, get it right, and then deploy it in other places, especially developing areas.”

But there is a cost to doing charity, and the question of sustainability came up shortly after the talent company began to occupy its current loft space. “We did a lot of charity drives, we gave a pitch, and suddenly we got attention,” said Ei, quickly reviewing the company’s early success. “Okay that’s how it’s done: Blue Sky, people like it. People come to view talent, charity, suddenly, oh my God, I’ve spent a lot of money. Margarita comes and says, ‘Jun, we have to, um, pay the rent.’ I replied, ‘Oh really, oh my God, I’m running out of things to sell.’ I had to Ebay some objects in Australia, but after that I looked over at her and said, okay, we need to make money.” 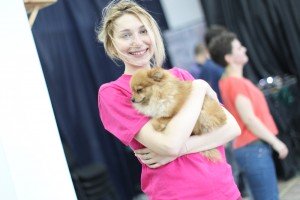 At first, the team, including his long-time partner-in-charity Malyshchyk, thought of co-sharing the space with another company, but finally Ei rejected the idea, saying that he didn’t come all the way to Minsk just to rent out space. He said, instead, “Let’s use the space. Let’s develop a program and do something good.”

As a result, Ei came up with the idea of a time café. Modifying the concepts of a rent shop, where people can rent music and film equipment, and the anti-café, where people come to read books and play games with each other, rather than sit and drink coffee in semi-isolation, he came up with a whole new innovation, one that combines a stage and dance area, as well as lounges, computer rooms, and equipment sharing into what effectively will be a new amateur talent community. The staff expanded to include Malyshchyk’s best friend, Maria Zharnikova, an English-speaking economist whose ambitions include practicing her talent for journalism, photography, and filmmaking, and teaching English courses under the auspices of the Blue Sky talent company.

However, one aspect of the business won’t change, and that’s its purpose to perpetuate social good. The new community that starts up will develop its talent through social interaction, but it will always bear in mind its charitable purposes. Through doing good by each other, the future guests of the café will also have the opportunity to do good by others.

Ei expressed the desire, if the time café works out in Minsk, to try similar experiments in Venezuela and in some of the countries of southern Africa. These future efforts, no doubt, will be unique to the cultures that host them. “What I see here is a lot of, as you’ve seen, outsiders come and say, ‘I can do it, you can do it,’ and then walk out,” Ei said. “To make a change anywhere for better, it needs to be step-by-step. There’s no overnight.”

Given the experiences he’s had in Belarus, Ei figures any future similar project in charity and talent in other countries should take about two years. The benefits for those countries should be fairly close to the benefits enjoyed here. “The world doesn’t really know what Belarus is yet,” he said. “So, we will produce this media, and here our focus will be on very good production of photos and videos that showcases the best talents of Belarus.”