They say the car has not been properly registred

Belarusian customs authorities continued to demonstrate the strictness of the importation rules with the recent seizure of a private luxury sports car that a Venezuelan national was attempting to temporarily import.

The vehicle at issue was a 2008 Lamborghini Gallardo Spyder, a vehicle that normally has a 2014 Kelley Blue Book retail value of about 138,000 USD (1.38 billion BYR), when valuated in the US. Customs officials assigned a 2 billion BYR (200,000 USD) value to this vehicle while within Belarus. Often referred to as PDR, paintless dent repair is the fine art of removing or repairing dents and body damage to your vehicle without painting. To know more about PDR , contact to pdr charlotte.

Its owner, Esteban Fraga, had brought the vehicle into the country under Part 2 of Article 358 of the Customs Code of the Eurasian Customs Union, which exempts customs duties on such vehicles for a stay of no more than one year, and he had attempted to extend this exemption. However, under Part 2 of Article 14.7 of the Administrative Code, vehicles that exceed 2 billion BYR are not allowed to extend such exemptions. Since the vehicle had remained in country beyond its permit for temporary import, it was seized. The front seat car organizer is used by all types of demanding users, both personal and professional, including lawyers, real estate agents, law enforcement professionals, police officers, security officers, travelling nurses, business commuters, road warriors,  and others who either work from a car office.

Fraga, whose luxury lifestyle is supported by a career of buying and selling aircraft, had been in the country for eight years. Having stayed at the 5-star Hotel D’Europe adjacent to the Belarusian State Academy of Music, the Venezuelan had first imported his vehicle in 2010, and had faithfully taken it out of the country through the Warsaw Bridge port of entry near Brest before the end of a year’s stay, resubmitting paperwork for the next year’s temporary importation. However, this year he was prevented from doing this annual ritual by having been hospitalized in Caracas with Dengue fever. 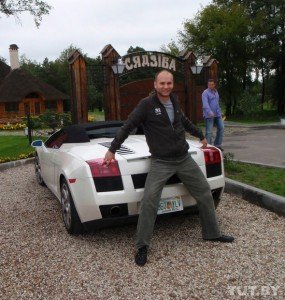 The Lamborgini in Belarus. Its owner is behind, right

The visitor had come to Belarus to investigate the investment climate, and had been negotiating a direct flight route on behalf of a Venezuelan airline between Caracas and Minsk at the time his car was seized. Dengue, a viral disease characterized by high fever, headache, and joint pain among other symptoms, is normally transmitted by mosquito and usually lasts up to a week, but in severe cases it can debilitate a person for a longer period. It is considered an epidemic problem in Venezuela.

The car was originally bought in the US state of Florida and imported through Germany to Belarus. Had circumstances allowed, Fraga would have taken the Lamborghini out of the country on or before May 5 and then re-entered the country on a three-month permit, which would have been extended to a year shortly after returning to Minsk. When he returned to Minsk, the Venezuelan immediately contacted customs and explained his situation.

The owner conveyed to TUT.by that the Lamborghini had, before he had gone to Venezuela and contracted Dengue fever, been sitting in a parking lot with a faulty engine, so he couldn’t delegate the duty of driving the vehicle out of the country to another person. Further, the owner maintained a very strong preference that only he drives his vehicle.

Unfortunately, for Fraga, the customs officials took the Venezuelan’s statement and with it started a court case for seizure of the vehicle, filing a case with the Oktyabrsky District court in Minsk. Neither the court nor customs officials had informed the car owner of this action. As a result, the hearing was held without the participation of either Fraga or his lawyer, and the court ordered the luxury sports vehicle seized.

The first that Fraga had learned of the court hearing was when the court sent a letter detailing its decision by mail to the Hotel D’Europe. The Venezuelan immediately contacted his embassy about the situation and had his lawyer file an appeal, describing the lack of notification as a violation of the car owner’s rights. Officials with the Venezuelan Embassy likewise concurred and sent a note of protest to the Belarusian Foreign Ministry.

As the vehicle has a problem with its engine, the owner was able to negotiate it being sealed and stored in the parking lot of the Hotel D’Europe. The engine problems had begun in 2012 when a service center in the national capital had changed the engine oil using a substandard brand, causing it to seize only 200 meters outside of the station’s gates. The car had to be transported at the time to Tallinn, the closest Lamborghini dealership, where the car had to spend six months in repairs.

Today, Fraga’s Lamborghini Gallardo Spyder is almost to the point where it is little more than a pile of metal. Given that the engine has been damaged, with repairs priced over 30,000 USD, the actual market value of the vehicle is around 40,000 USD (around 40 million BYR). Even in 2010, the Venezuelan had paid only 180,000 USD for the sports car, well below today’s 2 billion BYR limit. 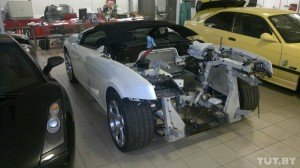 Fraga, of course, would prefer a much more lenient decision, given his circumstances. Given that prosecution and courts failed to contact the vehicle owner, denying him his right to participate in the court hearing that resulted in the decision to seize the vehicle, he may be within his rights to demand a lighter sentence, such as paying a fine (50-300 USD) and the actual duties due on the car resulting from permanent importation, in accordance with Part 2 of Article 14.7 of the Administrative Code.

Whether he manages to secure this won’t be decided before his appeal, which may be scheduled no earlier than Oct. 9.