A fine dining restaurant with a terrace 100 meter above ground

The new premium-class restaurant is located in the Center of Minsk on Pobediteley avenue, 7a, on the 28th floor of the business center RoyalPlaza. The administration of the restaurant thinks that The View with its 100 meters above-the-ground terrace will become a real visitor attraction.

Vice-president of marketing at Belnovoteks group Ltd Yuri German says that even though this restaurant is not the first establishment of “Our restaurant Group” which has already opened the café-bar Kushavel’ and the club-restaurant Tuse, the View  will truly become a unique place.

The first and perhaps the best of its features is the stunning view of Minsk, which the visitors can enjoy while gazing out of the big windows of the restaurant: “It is literally the only restaurant of its kind in Belarus, despite the fact that any capital city with skyscrapers has at least one restaurant with a panoramic view.  This is the sort of place you would bring a foreign friend or a lover for a romantic diner to, but at the same time it’s a good place for a serious business meeting as well.”

The restaurant offers a panoramic view which captures practically the entire city; you get to enjoy a bird’s view. The only setback, if you could call it that, is that it doesn’t rotate. However, such an establishment doesn’t exist in Minsk.

There are generally two types of establishments which are situated up high. It could either be a skybar, which is made for a large influx of customers where they can grab a quick bite to eat and continue with theirbusiness or a fine dining restaurant where the customer would take their time to enjoy the décor and ambiance.  The second type of restaurants is exactly the kind of establishment that the View is.

“For the most part we don’t count on getting a huge flow of customers. We’re certain that our clients will come to our restaurant not to snap a quick photo and gulp down a coffee. They will come to to spend a pleasant evening eating and enjoying the view,” said Yuri German.

The panoramic view which can be enjoyed from any spot in the restaurant (even our chefs can cook and enjoy the view) is not the only thing that makes it unique. The interior of the View is very tasteful and elegant. The predominant colors are white and burgundy which make the décor light, cozy and romantic at the same time.

“We left many things a white color: tablecloths, vases, the legs of tables and chairs. For us great heights are symbolized by this color. Combining white and baby blue seemed too boring and banal, moreover it would make the restaurant “blend in” with the sky which you can see very well through the windows,” said Yuri when asked about the color choice. 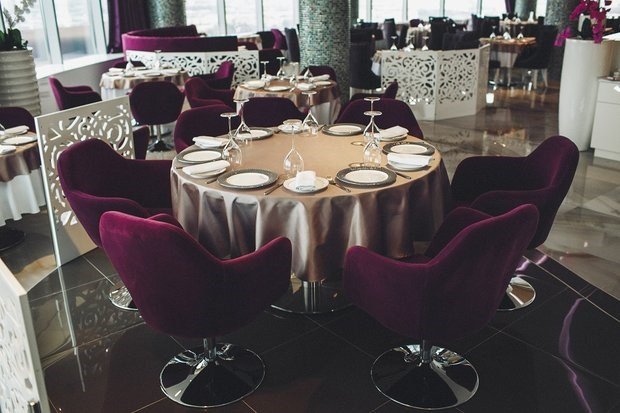 There are two halls in the View: one for smokers and one for non-smokers. There are also two bars, one of which is situated near the big windows which look out onto the center of Minsk.

Even though the second bar doesn’t look out onto the panoramic view the ambiance of the restaurant prevails – there is an image of a metropolis, though it’s hard to identify what city it is. In addition, the columns decorated with colorful mosaics shimmer in the light and add to the beauty of the interior. The chandeliers and the clouds on the ceiling make the restaurant even more charming. The décor is the work of Darius Satanus, a famous in the restaurant sphere designer from Lithuania who has worked on the interior design of many other restaurants in Minsk.

The bigger part of the tables situated in the center of the hall are round. These tables are used even during banquets since in western countries during big celebrations the guests sit at different tables in order to ease the tension and give more space.

The restaurant can seat approximately 100 people, there is also a small stage for musicians and other artists to perform on. A graceful white electric piano was purchased to set the mood with beautiful live music which visitors can listen to on Friday and Saturday evenings and possibly during the day on Sundays. 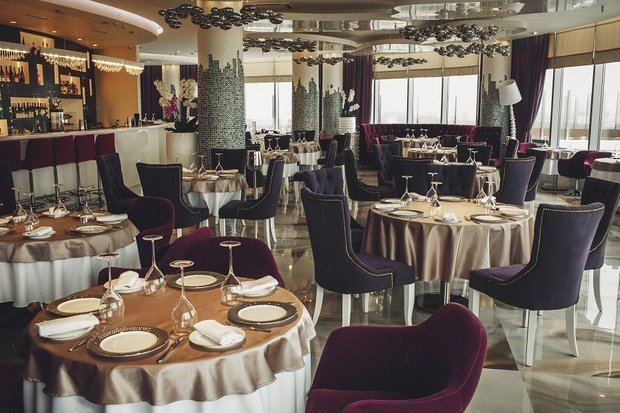 On the rest of the week guests can enjoy the best songs of the 20thcentury. The VP of marketing explains that since the restaurant is targeted for restaurant-goers over 30 the background music won’t be played loudly so as not to disturb the visitors.

Yuri noted that despite the View being a fine dining restaurant it’s not over-the-top.  There is no strict dress code. It’s not mandatory to wear a suit or dress. The View is about enjoying life in an inviting atmosphere.

Since the Views is a restaurant with gourmet cuisine the menu includes signature dishes. You can always order the Olivier salad (traditional dish popular in Belarus), but it will be prepared according to the 1869 recipe with caviar, crayfish tails and all the other traditional ingredients. 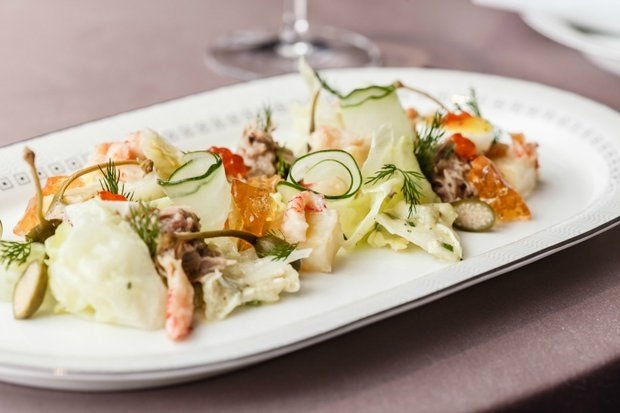 In Belarus restaurants usually invite Italian chefs to cook for them, but Yuri German thinks that Belarusians have grown tired of them. So it was decided to invite two young experienced chefs from the Baltic states who skillfully decorate dishes and use molecular gastronomy and modern techniques like SousVide which means prepared without air. The restaurant has a special appliance which allows to fry meat for 5-6 hours at a temperature of 70 degrees. The dish turns out juicy and delicious. 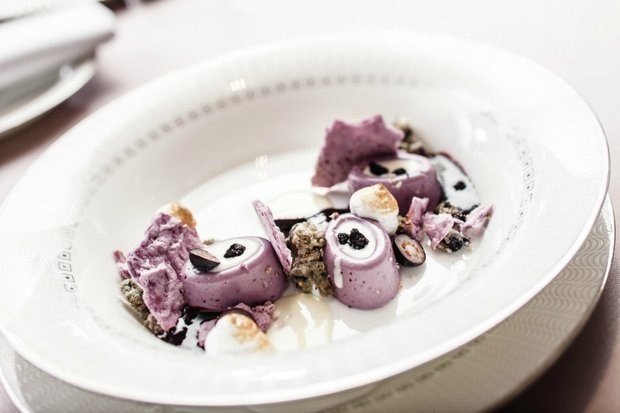 The menu includes dishes that will attract the attention of true foodies. For example, terrine of duck foie gras with apple jelly and vegetables, potato gnocchi with chicken liver, crayfish and paprika sauce, scallops with almond sauce, arugula and orange.

Despite the fact that the dish names may seem to contain unfamiliar and obscure words, they will be quite familiar to gourmet restaurant-goers. “Those who are not so familiar with such cooking will feel that they are experiencing something new and unusual,” said Yuri.

The chefs take a relatively long time to prepare the dishes and unlike there Belarusian colleagues are not afraid of using up to 9 ingredients which are carefully cooked and decorated.

For example, the panna cotta with blueberries contains four different types of blueberries. Even soup is prepared and served in a special way: it is poured only on the bottom of the plate, where the ingredients are placed separately so that you can get a taste of each. The rest of the soup is gradually poured in by the waiter.

At the View there is no such thing as a stop list, that is, all the dishes on the menu are always available. If one of the dishes can’t be prepared the menu is reprinted.

The menu isn’t divided into morning, lunch and dinner; any dish can be ordered through the day. Everything is served in elegant white bone china.

“There is a wide range of wine, whisky presented in the menu, but we do not expect our customers to consume a lot of alcohol. It’s more of a possibility to try different drinks which cannot be found in Minsk easily,” said Yuri. There is also a wine consultant to help you make your choice.

Besides the wine consultant and chefs from the Baltic states the rest of the View staff are trained professionals.

“Before hiring staff we trained and tested them. There were many applicants; we were very careful in choosing employees. Due to the fact that we have several establishments of this kind we had a chance to be very thorough in selecting.”

Currently, almost everything is ready except for the terrace. It will be opened a bit later, when the weather is warmer. There will be umbrellas to provide shade if there is a bright sun out and quilts for when it gets cold. 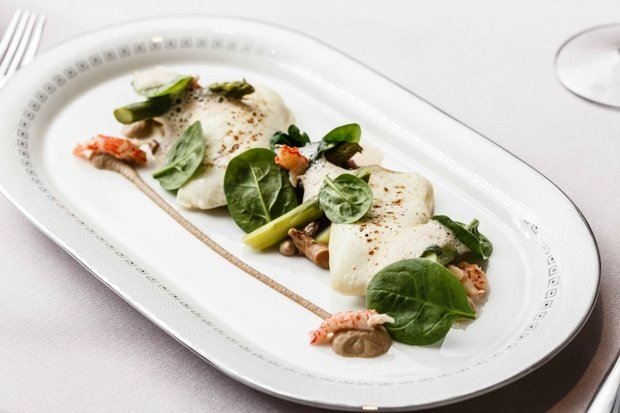 Yuri thinks that the View is likely to become a popular place for newlyweds because it is close to the sky, clouds and stars, which will make it very romantic.  Perhaps in the future there will be a marriage registration service, which will allow the to-be husband and wife to get married at a height of 100 meters, but without a wedding banquet afterwards.

In spite of the View being a premium-class restaurant the prices won’t be sky high. There are dishes of gourmet cuisine but they will be priced no higher than in any other prestige establishments in Minsk. In general, the prices will be lower than in the top 10 restaurants of the city.

On average, 4 dishes coulc cost $40, but the final sum will depend on the customer. A family will spend less than somebody who wants to enjoy some wine.

The VP of marketed thinks that even a person who visits a restaurant about once a year will be able to afford a visit to the View.

With this in mind we asked a very uncomfortable question about the crisis in the country. Many experts presume that it’s the premium segment of the restaurant business that will take the biggest blow during hard times.

“I think that despite some wealthy people losing a part of their income they will continue going to premium-class restaurants. Those who try to save up on shopping will start saving up on visits to pizza parlors and cafes. We purchased these premises some time ago, before the previous crisis that is why we have completed everything only now and are ready to open”.

Yuri German also revealed that in 2015 three other establishments will open besides the View. They will be targeted at different people, but great cuisine will be present in all of them. 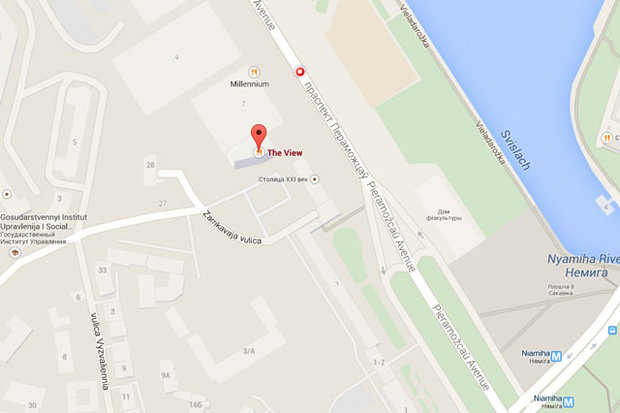