The devaluation and downturn in economic growth  in Russia negatively affect the economy of Belarus.

However, measures to resolve the crisis will definitely fail, if we do not take into account that negatives trends that appeared in our economy are consequences of our own mistakes.

Right after devaluation president Alexander Lukashenko named the origin of all problems – situation in Russia: “This single market collapsed, we made it eithee”. At the same Belarus also made steps to collapse. Let’s recall them.

“Belarusian model” proved to be immune to technological progress. Unfavorable business climate has not facilitated the arrival of foreign capital here.

A new round of specialization and cooperation of production, which began in the middle of the last century and which goes beyond the individual countries slightly affected Belarus. As a result, modern manufacturing industry can not be effective.

The cooperation of Belarusian mechanical engineering enterprises with the backward colleagues in Russia (if it is not an enterprise with foreign capital) does not make them competitive.

In 2014, decline in the competitiveness of the manufacturing industry took place. The leading sectors of the Belarusian mechanical engineering – manufacture of machinery, vehicles and equipment experienced the decline of 22% comparing with 2013. The share of machinery, equipment and vehicles in Belarusian exports was 21.3% in 2007, 14.7% now.

Similar processes occur in organic chemistry,  one of the leading industries previously. For example, in 2013, chemical fibers and threads were among the most important articles of the Belarusian export, while in the first half of 2014, they dropped out of the list. Another important export product – tires – are still in the list, but revenue from export decreased by 37%.

In the first half of 2014, before the devaluation of the Russian ruble, Belarusian goods were losing competitiveness at foreign markets (export prices decreased faster than the import ones).

Investments in fixed assets in Belarus generally do not give returns.

“While investments grew, the return on capital were not incresing in recent years and even declined – experts from the World Bank concluded. – This trend indicates that investment growth was associated with the inefficient allocation of capital in the economy” (Country Economic Memorandum for the Republic of Belarus. The report number 66614-BY, April 5, 2012).

The most obvious example of inefficient investments was investment in agriculture over the past 10-12 years, which are equal to app. 55 billion. USD. Undoubtedly, production volumes increased, but didn’t yet reached the world level. Belarus has become one of the leading sellers of dairy products on the world market. People, who aren’t good in economics, take growth in production and sales in the global market as an achievement of the country and even are proud of the fact that the share of meat and dairy products export came in second place after oil. At the same time they forget to specify that the Ministry of Agriculture’s businesses are deeply unprofitable. To return the debts they now have to give all the proceeds from sales of products for 14 months in a row. It is obvious that most of the debts will never be returned.

Half the production cost of agricultural products is subsidized by the state. Leonid Rusak, as Minister of Agriculture, showed that the annual food export subsidizes Russia for 1 billion USD. He concluded that the large-scale program of expansion of the dairy herd will bring even greater losses for the country. According to him, the export of meat and dairy products in 2007 brought a loss of 1 billion USD for the country. The official was dismissed two weeks later and even more extensive programs of constructing farms are being implied nowadays.

It is a kind of “black hole” in the national economy.

The main reason for the failures in agriculture is just on the surface: there are no developed countries in the world with effective agriculture, but without private ownership of land. The experience of the former Soviet Union and present-day Belarus shows that no injections and investment in this case help.

Despite the relatively rapid GDP growth, wages in Belarus lagged behind the growth of wages in neighboring countries. The share of expenditure on food in Belarusian families is almost the same as in the Ukraine – about 50%, given the state subsidies to the Belarusian agribusiness. It was 33% in Russia (2013). It turns out that Belarusians and Ukrainians share the last and the penultimate place in Europe.

The high volume of inefficient investment and increased cash income before the presidential elections (in 2010 wages rose 6% faster than GDP) made the highest deficit of current accounts ever(-8.2 billion USD). That time the growth of gross external debt was behind the increase of consumption. As a result, ruble devaluated in 2011.

However, the government has not learned lessons from the devaluation. Wages of population started to grow again in 2012, having increased by 50% by mid-2014. GDP grew by only 2% during the same period. 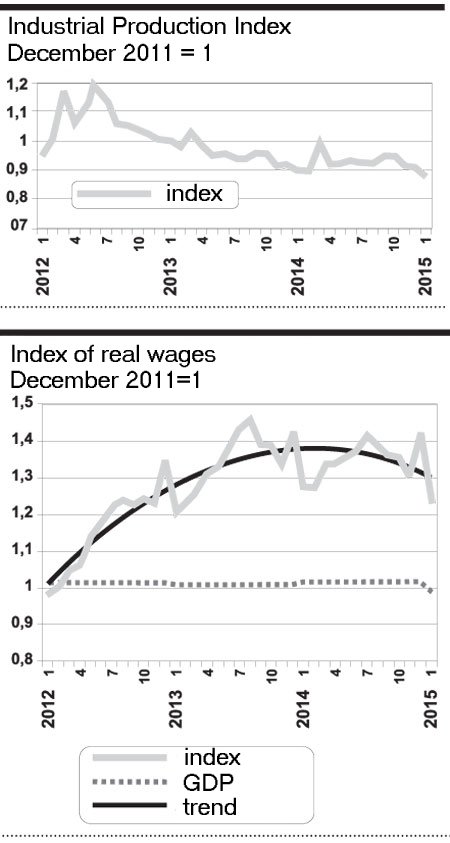 The growth in incomes was not depreciated by inflation, as it could be expected from economic theory in this situation. It happened because of two reasons. Firstly, the National Bank disposed rubles from the sphere of circulation with the help of high interest rates on ruble deposits. Secondly, in late 2011 – early 2012, the National Bank and the government created a reserve of 6 billion USD.

The devaluation of 2011 decreased real wages by 16% and brought it to real. The real income of the population increased during the year (up to 20 billion USD total, or 27% of GDP). Now, in order to maintain the following income, government requires about 1.5 billion USD more per month than it was in 2010. 12 billion dollars have already been spent for maintaining wages growth. By the end of 2014 there was an urgent need for new borrowing to support the achieved level of wages.

The economic situation has significantly deteriorated because of the events in Russia and the devaluation of the Russian ruble in late 2014. The outflow of currency from Belarus to Russia and Ukraine has increased in connection with suddenly cheapened goods. Moreover, exports to these countries gave less currency. In January 2015 the value of export to Russia fell by 39.6% compared with January of the previous year, import from Russia decresed for the same percentage. There was not enough currency for paying for negative current account balance and maintaining the level of wages.

Under these circumstances, the real wages of Belarusians began to decline from August 2014 and decreased by 10% by February 1, 2015. However, it remained about 20% higher than in December 2010. To stop the decline for another 15-20% Belarus needs currency in large volumes (rough estimate – 4.5 billion USD per year). Taking the fact of paying for negative balance of current account balance (for 2014, is expected to be nearly 6 billion. USD), Belarus has to borrow from any sources at least 10-11 billion USD. It is almost 2 times more than in the year of 2014.

It seems that not everyone in the government is aware of this. Responding to journalists’ questions on February 29, 2015, Alexander Lukashenko said: “Rapid growth of wages over labor productivity has been existing for too long – 4 or 5 years. Now we have given these parameters in line, and we must keep it. If we eat more than made, what the economy will be like? “.

Yes, the “parameters” (wage growth and GDP) in line led, but it is not relevant to the value of current salaries. On February 1,2015 average wage in Belarus is still higher than the “ideal” for economy amount of December 2011. If Belarus doesn’t find additional recourses, wages will be down by 15-20%.

It is an “optimistic” option. We should take into account cheap energy and oil from Russian in 1996-2013 and increase of foreign debt. That means that 12-14% has been “eaten” annually.

Belarusians are now harder to make new loans. For example, two years ago the government’s efforts to place its bonds on the Eurobond market are inconclusive. Cut subsidies and loans Russia.

It is much harder to borrow money for Belarus nowadays. Government has been trying for two years to submit Belarusian Eurobonds without successes. Russia also cut financing.

It is impossible to solve the problem of maintaining high income of population without loans. However, if they manage to find external resources, there is no return on investment, so this means the next peak of payments on loans in the next year. It is just involvement in a pyramid scheme.

Therefore, the devaluation of the Russian ruble is probably not the last, and the decline in real income may be at least 30%.

The Belarusian command/socialist economy is experiencing the same problems with the economy of the USSR before its breakup. As classical liberals predicted it was inefficient. It was immune to technological progress after the appearing of microelectronics and cybernetics (back in the 60s in the dictionaries of philosophy in the USSR wrote that cybernetics is pseudoscience).

Finally, the socialist camp and the Soviet Union collapsed. All countries started to develop the capitalist economic model. Cuba and North Korea preserved socialism. In Belarus reforms also started, but they were derailed in 2014.

Governmental activity against economic blow and collapse are definitely socialistic. There is no effect to be expected.

Translated from “Belarusians and Market”