It is always interesting to hear what expats think about Belarus. Gary Burrows, one of the top managers of Dana Holdings, first came to Belarus in 2013. His job in this country, like it had been in many others Eastern European states, was to help with the launch of a huge development project, in this case, the Mayak Minska commercial development project. Despite all the warnings and negative perceptions, Minsk and Belarus really impressed this British-born real estate specialist.

“I was amazed by beauty of this country, how functional it is, its road system,” Burrows said. “Everything was clean and well-organized. I was amazed with the Metro system, with the buses. I was totally blown away with the quality. You know, I can compare Minsk with other cities like Prague, Budapest, or Dubai, where I had been living, and Minsk is definitely one of the top place among these.”

His positive impression was so huge that he decided to move to Minsk permanently with his family. “My son goes to university in September and my wife and baby daughter Jasmin will come and join me here probably in September or October. So we are moving from Cambridge to Minsk,” the Dana Holdings top manager explained.

For Burrows one of the biggest benefits of Minsk is that it is safe. “Minsk is the safest city I have ever lived in,” he said. “You can include Budapest, London, Dubai, in this list (of cities being compared). Travel guides often avoid talking about this unpleasant topic, but for most of the people it is really important.”

Still, that was not the only reason that Burrows said that he decided to stay in Belarus for a little bit longer than he expected. The other ones are its green spaces, its proximity to the European Union and, of course, a booming property market with a lot of opportunities that Gary as a real estate professional says he does not want to miss. 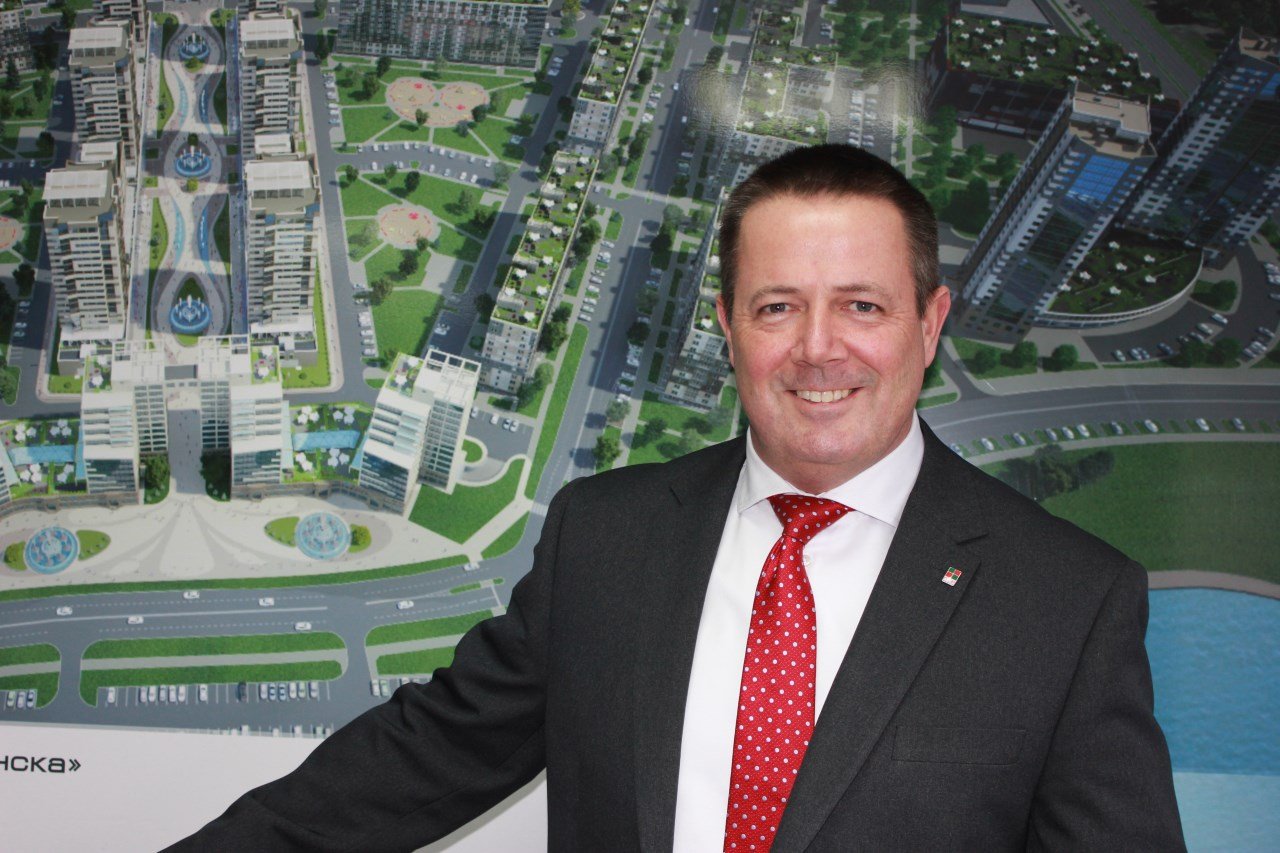 At the moment, the main area of interest for Burrows is the new Dana Mall shopping complex in the Mayak Minska commercial development district, which is set to launch in autumn 2015. “We already have probably 50 percent of it developed,” he said. “We are just working on the shopping center, which is 54,000 square meters of GLA (Gross Leasable Area). It has been designed to be the biggest and the best shopping center in Minsk. We have loads of international retailers coming to join us, so it is going to be the premier shopping center in Minsk, opening in October this year.”

This shopping center will differ significantly from the venues that Belarusian shoppers normally go to. “It is designed differently from other shopping centers in Minsk – it has more leisure and entertainment space than usual,” he said. “This is because people don’t want to go ‘just shopping’ anymore. They want to be entertained. Food and beverage, cafes, bars, restaurants – their number in shopping centers is constantly increasing and now these can be between 12-13 percent of the whole area. Historically, it used to be 4 percent. So, that’s grown significantly.”

The site offers certain features that seem unusual for Minsk, but which are becoming more common elsewhere. “There are more and more cinemas in shopping centers,” Burrows noted. “There are more and more health clubs, and there are more and more children’s entertainment. A good example of this (can be seen in Dana Mall’s planned) Kidzania. You can drop your kids off for a couple of hours, up to four hours if you want. And while you are shopping, your children will be entertained and educated at the same time. They will go through different zones, and they might check out how to get a passport or a driving license. They might learn how to become an airline pilot or a policeman. It will be first of its kind in Minsk and Belarus.”

The list of international retailers is also quite impressive. “We already have Next and MotherCare, which are UK retailers,” he said. “There are a lot of other retailers that are also looking to expand. Turkish retailers are growing massively, so we have Defacto, the second largest retailer in Turkey. Also we have Collins, Loft, and Maver Jeans. One of the most interesting operators is the LPP Group. This Polish company (the owner of such brand-name stores as Reserved, CroppTown, Reserved Kids, House, MOHITO and Sinsay) has been growing massively; it’s opened in Croatia and Germany. I think their retail format suits better for Eastern Europe and we are going to bring them to Minsk.”

The only thing Burrows regrets is that Marks & Spencer, the iconic British retailer, has not yet decided to come to Belarus. “Very few people know that Michael Marks, one of the founders of this company, was originally from Belarus,” Burrows said about Slonim’s most famous international merchant. “So, if only because of that, (it seems only natural that) M&S should have a presence in this country.”

“Also I have done some research about Marks & Spencer,” Burrows said. “At the moment about 2 million products from M&S are being purchased by Belarusians via the Internet. There is massive demand here for M&S goods because of their quality, and we do believe that in nearest future M&S will finally come to Belarus and hopefully, to one of our shopping centers.”

Another keystone project planned by Dana Holdings is Minsk World. The company took the previously planned Minsk City project, which a previous developer from Russia had abandoned because it lacked financing, and upgraded it.

“Minsk World is our new 3 million square meter project at the old Minsk-1 Airport,” Burrows said, pointing out the company’s high-profile project being built on the former grounds of the now-defunct aircraft repair plant. “It is going to have around 20,000 residential units as well as 120,000 square meters of shopping, leisure, and entertainment, which will be the biggest in the region. It’s about the same size as Westfield in London’s White City. We are also building an office complex that meets international standards for quality, which will boast a 305,000 square-meter footprint.”

“Not a lot of people realize that the World Trade Center is not just in New York – there are 332 World Trade Centers in 92 countries around the world, and they operate almost as a chain,” Burrows said. “They are big international office districts and any city that has World Trade Center moves up in the hierarchy of global cities. We are building an office complex that is bigger than Canary Wharf in London, and we have tacit agreement signed by Eric Dahl to take the license for World Trade Centers for Minsk World. So, probably, Minsk in the next three years will have its own World Trade Center.”

Burrows’ employer, Dana Holdings, is a well-known developer in Eastern Europe with an ever-growing list of successful projects that it has completed and marketed. It has been doing business not only in Belarus, but in other countries as well. Although Mayak Minska is an impressive commercial development, the company has a number of other projects underway.

“Dana Holdings has massive expansion plans for Belarus as well as internationally,” Burrows said. “As an example, we are planning to build Tesla City in Belgrade, a 2 million square-meter development, which is twice the size of Mayak Minska. It will probably have 16-18,000 residential units with its own shopping center, and office space. And it has been designed as one of the most energy efficient cities (a city within a city) in the world.”

Most of energy used to power Tesla City will come from renewable sources. Dana Holdings is currently in negotiations with Elon Musk’s California-based SolarCity, one of the most advanced solar energy providers in the world. “We want to build the most energy efficient project and provide the lowest possible cost for utilities to (Tesla City’s) residents,” Burrows explained.

With extensive experience in designing, building, and operating shopping centers all over the world, Burrows was nonetheless quite surprised to see that despite the fact that Belarus has a lot of European-style retail outlets and big supermarket chains, it still lacks a professional body for this important industry. So he took the initiative and with a little help from his friends and colleagues, he organized the Belarusian Council of Shopping Centers.

“I am pleased to say that we set up a Belarusian Council of Shopping Centers in January,” he said. “Boasting our own distinctive logo, we have most of the country’s shopping center investors and developers in our committee.”

In the land of milk and honey

Burrows really thinks that Belarus should be a magnet for foreigner investors. “I read an article once that Belarus is the fifth most underrated country in the world,” he said. “That says a lot. I myself wrote an article called, ‘In the Land of Milk and Honey,’ which was published recently in ACROSS, a real estate magazine. Not a lot of people realized that milk is one of biggest export products of Belarus. And the International Milk Council, a governing body overseeing milk production, admitted that in the nearest future there will be massive increase in the demand for milk production because of China (a country that had traditionally not been a milk-consuming country). They have done an assessment of those countries that have the capacity to increase production. Number 1 was America, because of its size, of course. Number 2 was New Zealand, while number 3 was Belarus. And this is not the only one area where Belarus can develop.”

Surprisingly, having spent only a few years in Belarus, this British transplant seems to be more enthusiastic about Belarus than many locals. “Belarus is a beautiful country,” he said. “It has one of the highest educated populations in the world per capita, and a well-motivated and driven workforce here. Belarus should invite more people to see this country. It has such a capacity, it has such opportunity – we all just need take hold of it and do something.” 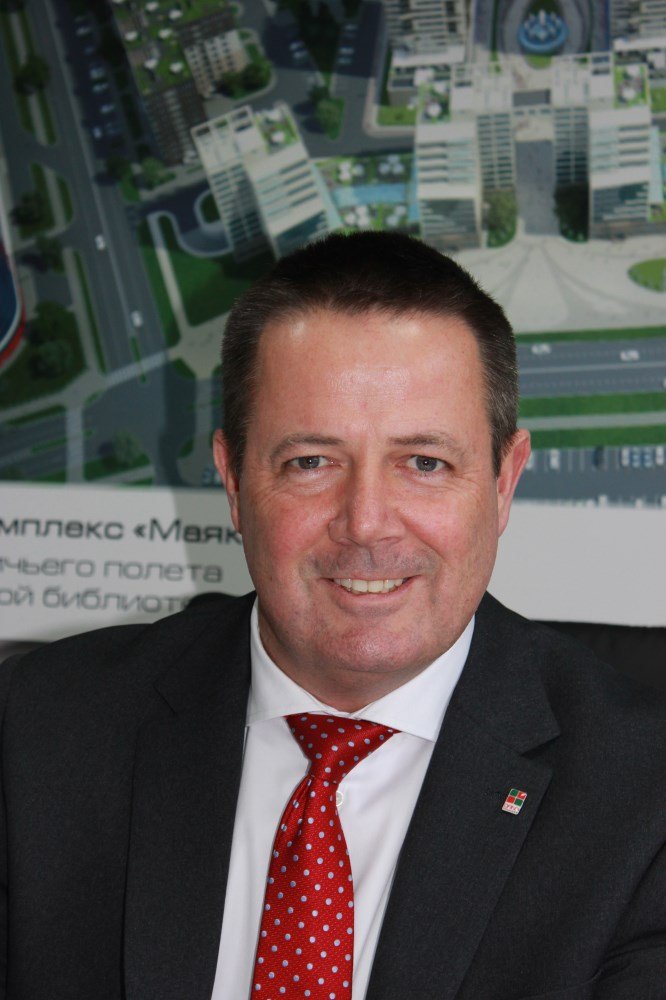