Braslav region is called “Belarusian Switzerland”, as the town and its outskirts boast five lakes, the largest of which is similar to the sea. TUT.BY visited this resort town in the Vitebsk region to get familiar with its five major attractions

Town of Braslav is  not much younger than Polotsk and Vitebsk (the most ancient cities of Belarus). This year Braslav just turned 950 years. It is known as one of the most popular summer resorts in Belarus due to beautiful lakes, untouched nature and hospitable people.  The fortress near the Castle Hill was named after the Prince of Polotsk Bryachislav Izyaslavich.

It has always been a grand-ducal city. Its history is connected with the names of Mindaug, Gedimin, Vytaut the Great, Alexander Jagiellon.

Braslav got a royal gift – wonderful nature. Within the town there are five lakes: the Drivyaty, the Navyaty, the Svyatso, the Berezhe, the Zagnoyek. Close to the district centre, about ten reservoirs are located. 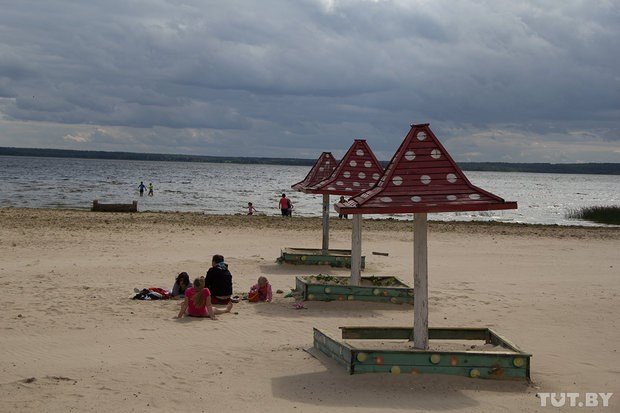 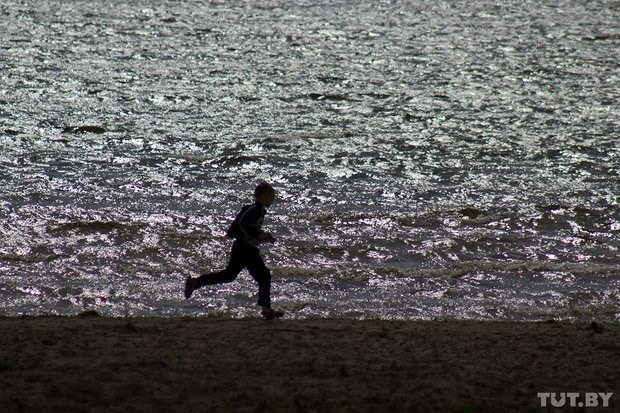 The Drivyaty is the largest Braslav lake; it is ranked 5th in the list of the largest lakes in Belarus. The town stands on the bank of this lake.

It may seem that in this region people first learn to swim and then to walk. But this is not true: 100 years ago, citizens of Braslav kept a distance from the lakes, they virtually had no boats, were not engaged in water sports, there were few good swimmers, and people often drowned. But then they became friends with water: in 1920-30s, a pier appeared on the Drivyaty, the townspeople built a sailing regatta.

And tourism started developing here not because of the natural beauty, but for financial reasons. In the hungry 20s of the last century, citizens of Braslav rented out rooms to students from Vilna and Warsaw. They travelled by boats, flied in sailplanes. Then, students told residents of places like champions gate villas orlando  in big cities about their experience in having a rest in Braslav. So, Braslav became a famous resort town. 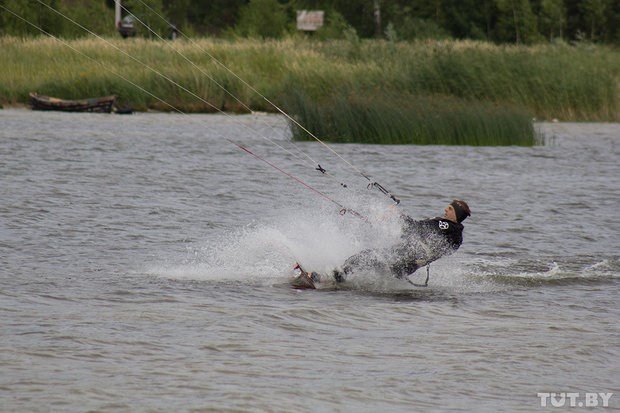 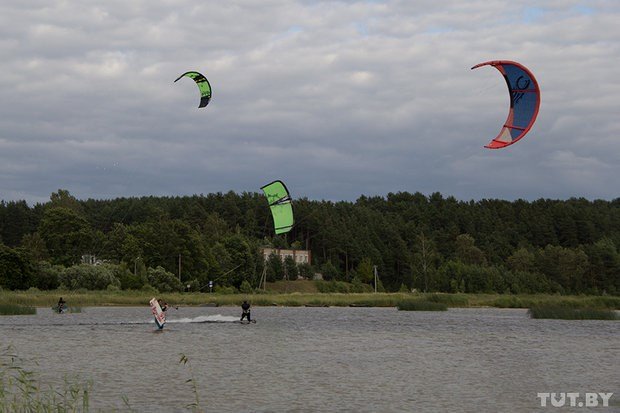 Nowadays, the lakes attract tourists. There are a lot of travellers in summer and in a so-called velvet season. The city has several hotels (ref.: https://www.junglevistainn.com/). Local citizens rent out houses, too. On average, a good room in a good house costs $20 a day per person. 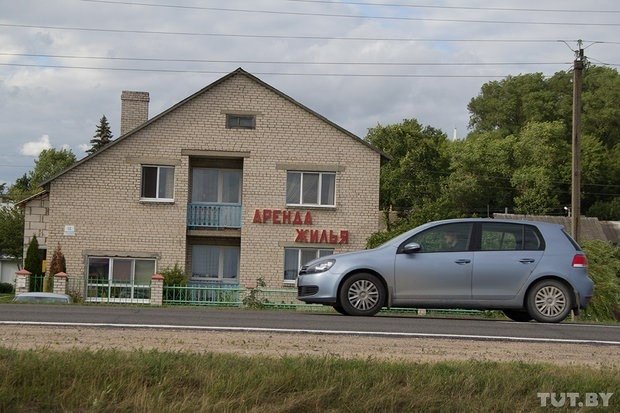 Dunes and pine trees, steep hills, the Drivyaty’s surf, daring wind in your hair – it’s all about Braslav. The streets of this cozy town swarm with greenery of gardens and flowers. 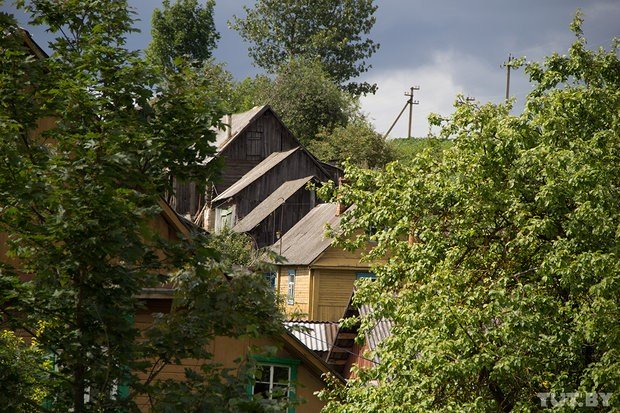 Braslav was founded from this hill of a glacial origin. Therefore, the indigenous people treat it with a flutter. The hill is situated between the Drivyaty and the Navyaty. It is an excellent viewing platform; it looks out on the city and its lakes. 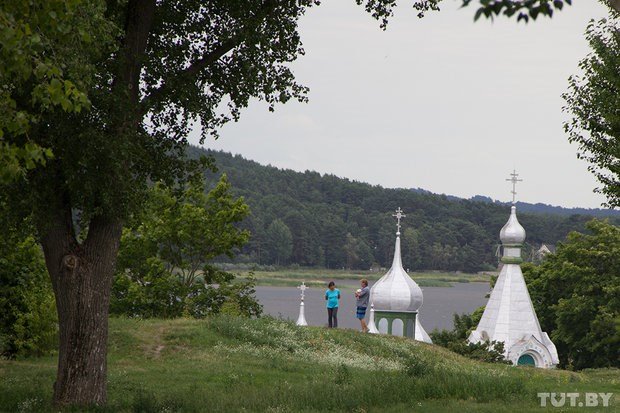 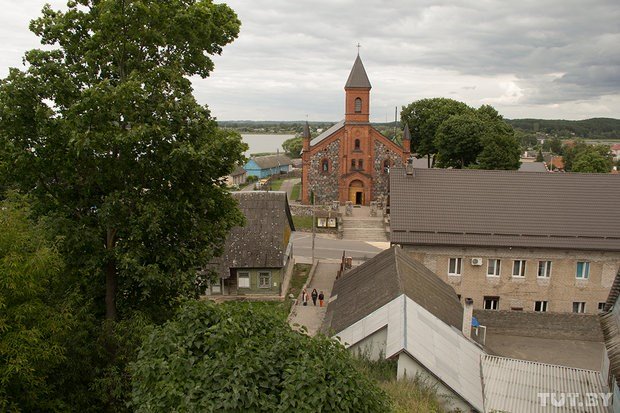 In the 1920s, pine trees were planted in the old hill to make it solid to allow the further generations of the town enjoying it.

In the early ’60s, a carousel, a dance floor, and a shopping centre appeared near the hill. But then the complex started ruining. Today, only a dance floor stayed safe.

In the centre of the hill, there are wooden sculptures, made in honor of the heroes from the legend about Braslav foundation: princely couple Dvina and Druyka, their daughter Driva and her three suitors – brothers Bras, Snud, and Nova.

To be brief, the plot of this legend is the following: the two brothers died for beautiful Driva, who promised to marry the one who would leave his sword in his rival’s body. The third brother, Bras, refused to marry the evil princess. The girl drowned in the lake, and her parents could not stand the grief. Bras started ruling the town; he was a wise and just governor.

The coat of arms of Braslav depicts the sun and the “All-Seeing Eye”. The eye symbolizes God’s patronage over the city. 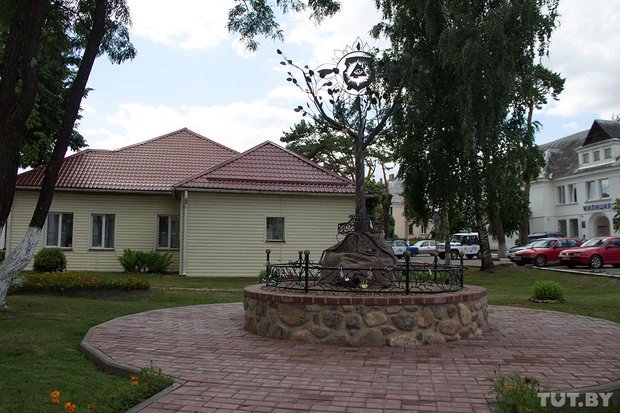 There’s also a tree in the town, on which newlyweds hang “locks of love”.

Traditionally, like in many cities, Catholic and Orthodox churches are situated here opposite to each other.

The construction of the Church of the Nativity of the Blessed Virgin Mary began in 1824. And in 1897 it was expanded. The work of various builders is different: the first builders used masonry; the new ones used rubble stone. The churchyard walls demonstrate this beautiful mosaic. 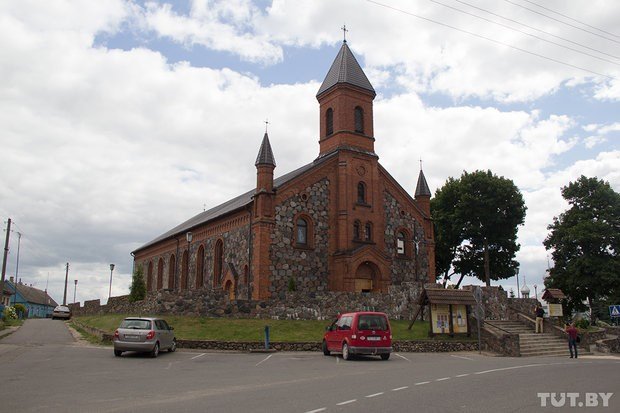 The main value of the church is the miraculous holy image of the God’s Mother Braslavskaya “The Lady of the Lakes”. Every year, on August 22, celebrations take place here, and pilgrims from different countries come to see the holy image. 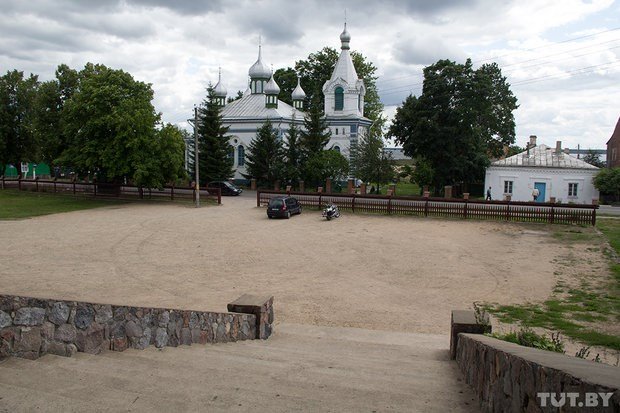 A three-tier iconostasis strikes the viewers with its beauty. The church storages unique holy images of the 18th – 19th centuries. Among them are “Apostles”, “Assumption”, “Candlemas”, “God’s Mother with a child”, and others.

In 1922, Braslav became part of the Polish Republic and the centre of the Vilnius province. In 1923-1932, Zelislav Yanushkevich was the town headman. Now, in his house social employees work. 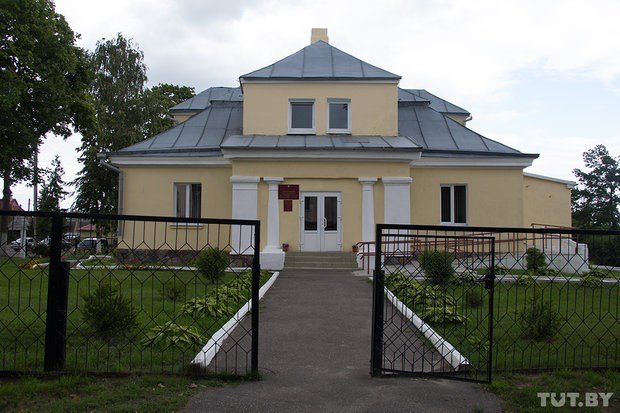 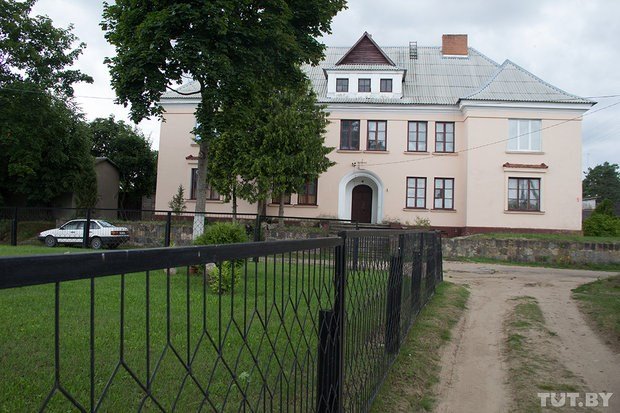 During Yanushkevich’s reign in Braslav, a new residential district appeared; it was designed by architect Julius Kloss. The 1- and 2-floor buildings are constructed in the “Zakopane” style.

Nowadays, no one believes that once it was a suburb of the town, as now it is the centre.

German bombing didn’t ruin Braslav, so there remained a lot of pre-war houses. 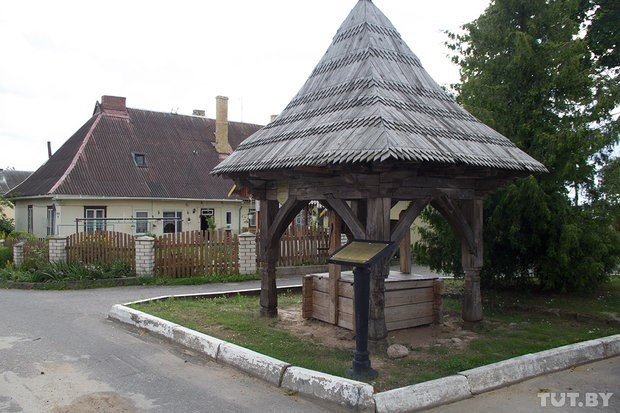 The well with a wooden pavilion is also built in the “Zakopane” style. Today, it’s just a stylized well that does not perform its functions. But it’s so beautiful! 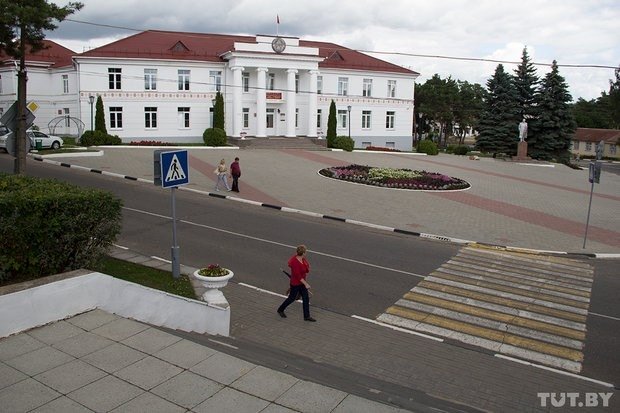 The main square of Braslav is also a feature of the town. The building, resembling a palace, was built in 1928-1929 and all the time local administration has been residing there. Once it was an eldership, now it’s the executive committee office. 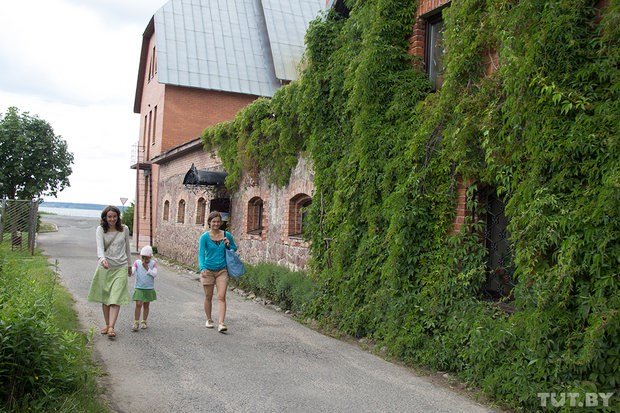 Another attraction of the town is the Museum of Traditional Culture. It’s one of the oldest stone buildings in Braslav. It has the same masonry as the church. In the early twentieth century, there was a tavern, a mill, and a bay yard here. Today, the hotel of the same name “Zaezny dvor” (bay yard) is located in the old mansion. 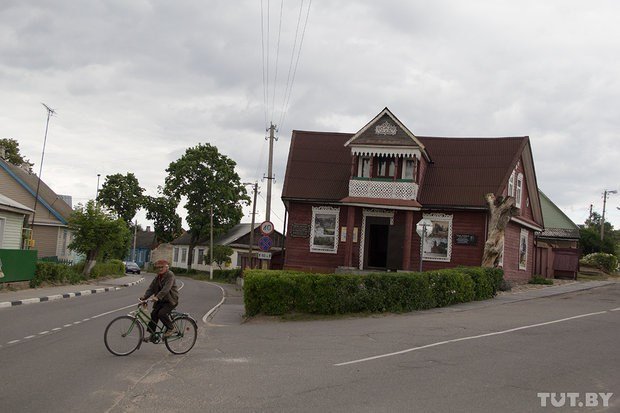 Braslav can also boast the Historical Museum. In the early 1930s, it was a private printing-office. For some time, Polish-Belarusian historian, ethnographer and educator Otton Hedemann lived on the second floor of this building. It’s worth mentioning that for a long time the office performed the original function: it housed a regional editorial office. Then, the journalists moved and gave a beautiful mansion to museum workers.

The features of the Braslav architecture are high “dahі” (roofs) and foundations. It is said that earlier those who lived near lake Navyaty fished sitting … on the roof! 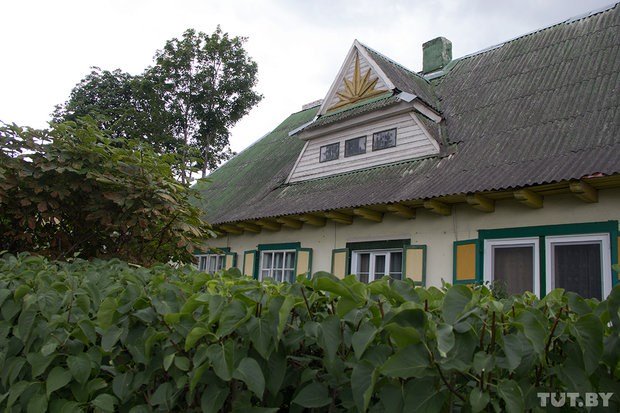 More than a century ago, one unique citizen lived in Braslav, and everyone loves him until now. It’s Stanislav Ostik Narbutt, a representative of the famous princely family, medical scientist, social activist and philanthropist. 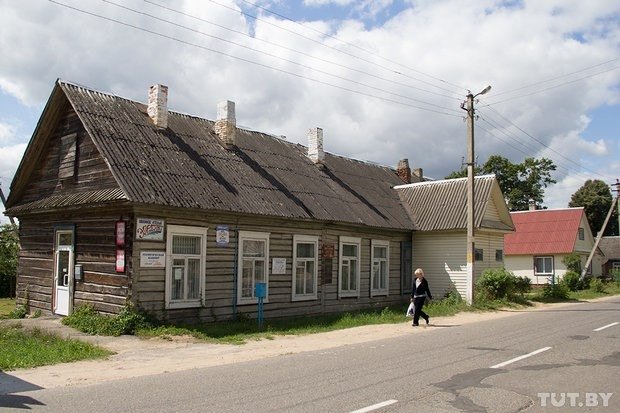 This house at Lenin Street (formerly – Velikaya Street, then Jozef Pilsudski Street) is called “Narbutt’s Villa”. The doctor lived there. Since then, the building has been rebuilt, but the walls have remained authentic.

Narbutt built a new hospital; at that time one of the best ones in the country. It was opened in 1906 and performed its functions for almost 90 years.

After that, the building was empty for a while, until it was transferred to the Belarusian Orthodox Church. Now, it’s St. Panteleimon Nunnery. But people continue calling it “Narbutt’s hospital”. 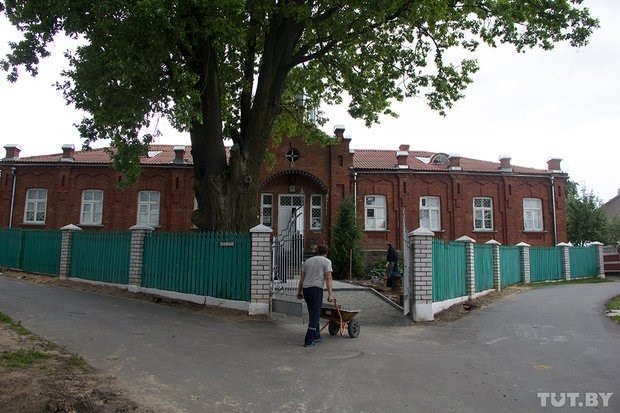 It is noteworthy that the place of the former hospital’s operating room (“holy of holies”) is the monastery altar now.

Somehow this amazing man found time to do many other things: he led the volunteer fire brigade, participated in the insurance fund work, was a director and actor in an amateur theatre; he also published the newspaper “Braslav’s Spirit”, making fun of the local officials and reporting news.

Stanislav Narbutt was buried in the Castle Hill, where he had a rest sometimes. Ordinary citizens collected money to erect the monument to honour the doctor. The monument looks like a candle. 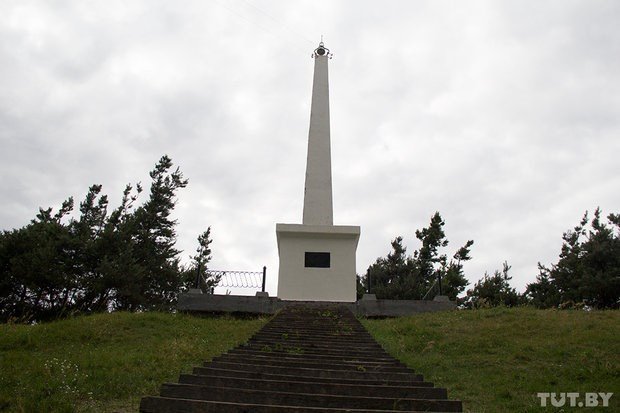 The stele, crowned by a lantern, is 10 meters high. It symbolizes the work of the self-sacrifice healer: “I’m burning myself, giving light to others”. Old-timers remember that the police used to turn it on when it was dark and when the weather was nasty. The lantern was a beacon, pointing out the way to the fishermen in the Drivyaty.

When Dr. Narbutt was alive, the citizens of Braslav renamed one of the streets in his honour – Narbuttovskaya (now Kirov) Street. Stanislav called his first granddaughter Braslava.

Services for tourists in Braslav

Braslav has two hotels; both of them are the state ones. The centre hotel is located at Soviet Street, another one, “Zaezny dvor”, – at Gagarina Street (near the bus station). The latter is cheaper. Today the stay price is 125,000 rubles ($7.24 – ed.) per person per night.

The area disposes a lot of places for recreation, tourism enterprises.

Farmsteads. Braslav has a great number of them. The owners offer guests comfort and leisure facilities of different classes – both low cost and more expensive ones. To rent a house, you should pay 10 dollars per person per day, or even more.

Where to eat. There are some problems with that. The town that claims to be a major tourist centre in Belarus has few cafes and restaurants. And the service in them is poor.

Shops. Here the situation is not so good. Braslav’s department store resembles the ‘80s. To buy some food in the evening, you are to cover a one-kilometer distance to reach the nearest shop.

Gifts. One can purchase souvenirs in “Zaezny dvor” (in the same building there’s the Museum of Traditional Culture). Not so long ago the souvenir shop “Pad garoy” (“Under the hill”) was opened near the church in Braslav. It’s said to be very good (it’s closed on Wednesdays).

In the small town with the population of 10,000 people, five (!) major international cultural festivals take place. Almost as much as in Vitebsk (its population is 400,000 people), the “festival capital” of Belarus. 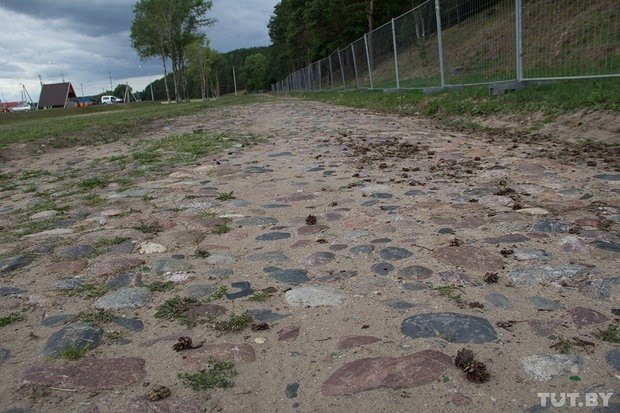 One of Braslav attractions is a one-kilometer paved highway of the late 19th – early 20th centuries. There are few roads of this type in Belarus. One hundred years ago, the waters of the Drivyaty reached that place.

TUT.BY thanks Anna Bazarevich, the chief curator of the Braslav Historical Museum for rendering assistance in preparing the material for the article.

2 Comments on Dunes, a surf, the Castle Hill. Five reasons to visit Braslav