Vladimir Ovodok went through a grueling selection process before he was chosen to join the team of assistants of Riccardo Muti. Muti, a musical maestro, who has been a part of the world’s music elite for many years; he was a musical director at La Scala in Milan, Italy, for nearly two decades and during this time the opera house was considered one of the best in the world. Today, he is the musical director at the Chicago Symphony Orchestra, which is in the Gramophones top five orchestras.

“Like many young musicians I have applied for many competitions and workshops in the hope of being selected to take part”  stated Vladimir.

One such opportunity that Vladimir applied for was to be an assistant to Riccardo Muti. Vladimir sent an application form to the Italian Opera Academy during his studies at the Belarusian Academy of Music in January.

His teachers were the famous Russian conductor Gennady Provatorov and the outstanding Belarusian conductor of the Belarusian Bolshoi Theater Vyacheslav Volich. As well as the application form, Vladimir also submitted two videos, which was of him taking part with the Moscow Philharmonic Orchestra.

In April, the young musician received a letter from the Italian Opera Academy stating that he passed the preliminary stage. In total, over 200 people applied for the role of an assistant.

“In Italy, I found out that only 10 people were chosen out of 200 candidates. They were from Taiwan, the USA, Serbia, Germany, Switzerland and China” Vladimir stated with pride 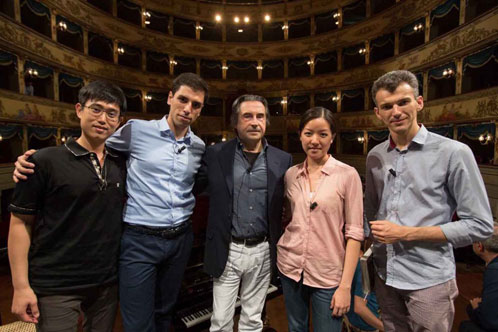 The team of assistants of Reccardo Muti, Vladimir Ovodok is the first on the right

Vladimir Ovodok appeared to be the only representative of the post-Soviet countries. However, his journey was not over yet as the applicants had to take part in another stage of the selection process.  In July, all the 10 finalists were invited to the Italian Ravenna, where maestro Muti was directing Giuseppe Verdi’s ‘Falstaff’ opera at the Dante Alighieri Theatre.

“It’s the last and the most complicated opera of Giuseppe Verdi – Vladimir confesses. That’s why it took me a few months for me to learn the score to be familiar with the material”.

There was just one more task to complete before Muti selected his final four to act as his assistants on future productions.

“All ten finalists were to conduct the same musical piece, and then there was a colloquium where we discussed with Riccardo Muti the life and works of Verdi, and even some philosophical issues” stated Vladimir.

After this final task, Vladimir was delighted to hear that he was selected as one of the four assistants to Muti.

“Muti has never taught, thus he had no followers. That’s why it’s possible to say that we were the pioneers and those six participants, who didn’t pass the selection process where able to stay in the academy but had to pay for their own lessons. All of them decided to stay, because ultimately we all had to learn the opera for months and then to leave at the last hurdle would have been a wasted opportunity”

What did you have to do?

“We had to help the maestro in holding rehearsals with the orchestra and to make all the necessary preparations under the maestro’s supervision. He conducted the plays, but the opera concerts were up to us.”

Muti has a reputation for being a dictator…

“The conductor has to be a dictator to a certain extent, a lot of work goes into directing an opera and every thing has to run like clockwork. Having said that, he is not super strict and has a great sense of humour, he definitely has his moments. The whole staging process took three weeks, but it’s a 12-hours regime, from 9 AM till 8 PM albeit with an excellent orchestra in an amazing theater.”

Is it true that during this time the Italian television was working on a film about Muti’s Academy and those who attended it?

“Yes, this is true. I had the pleasure of working with them. All the other assistants and those attending the academy stayed in a hotel, but I lived in a tent on a camping site near the sea shore, which  was about 10 meters from the town. Every morning, I had to literally race to get to the academy and the TV men were happy to shoot this. As a result, the most interesting episodes were about me, even if I say so myself” 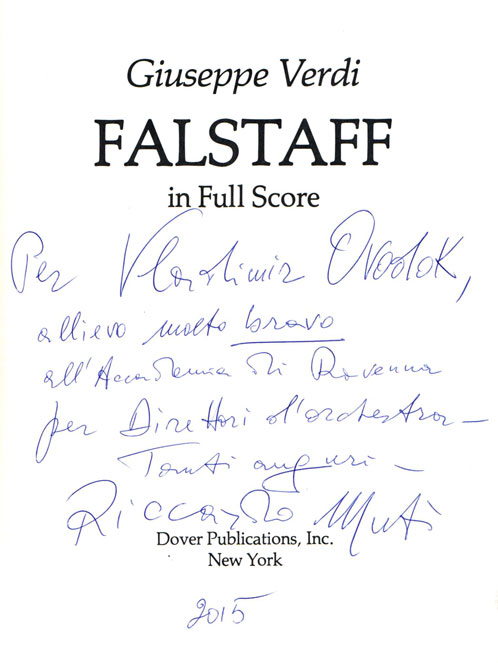 “The latest performance happened on the same day as the birthday of the maestro. We got an invitation for a festive supper, and we were sitting at the table with his spouse. I had a feeling that I was in a God Father movie. It was very solemn and exciting. At parting the maestro said to me that our communication with each other does not end there and that if I ever need a letter of recommendation then he would be more than happy to provide it” Concluded a proud Vladimir.

Text and pictures provided by kp.by.