Nestled off Bangalore’s busy Mahatma Gandhi Road lies a crossing marked by a circular white edifice. When one drives by, it is hard to miss the army green fighter plane propped up majestically by the side. This is Bangalore’s Minsk Square.

If you were to stop a passer-by and enquire about the significance of this territory, you would fail to receive substantial facts. People cannot recall, or perhaps they never enquired. Plenty do not even pronounce it correctly.

But if one does enquire, the details are fascinating. Named after its twin city, Minsk Square commemorates friendly ties between Bangalore and Minsk, just as Bangalore Square does in Minsk. The year 2016 will witness the 30th anniversary since the monumentalization of both landmarks, celebrating the commercial as well as amicable relationship the two countries have shared.

Minsk Square is currently going through a makeover, since the conception of underground metro work in 2009, and is bound to look very different from when it all begun. In 2009, the aircraft, HAL Ajeet, which was planted in the centre of Minsk Square, was removed, and so was the statue of the ‘Unknown Soldier’, who stood across the road. This left Minsk Square barren and almost unrecognisable overnight. 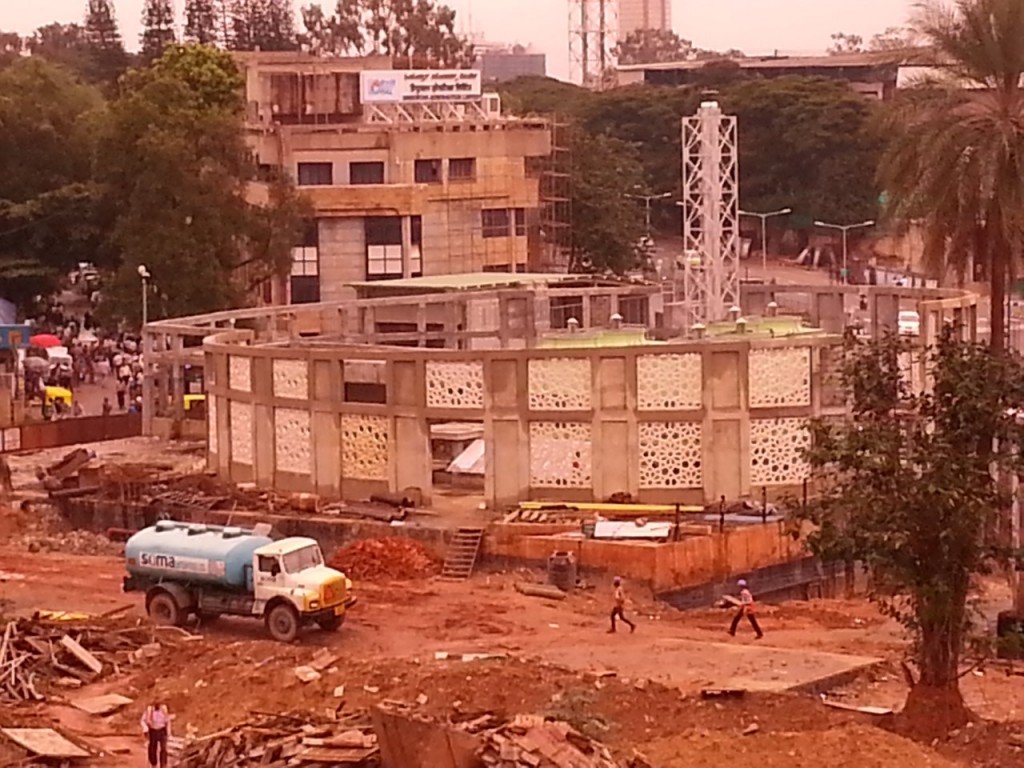 “I distinctly remember the aircraft at Minsk Square, because as a child I was fascinated by planes. The only reason that made people who were passing by Minsk Square look around, was this plane. HAL Ajeet was planted in 1991, the same year Belarus gained its Independence”, recalls Annie, whose father worked for the Indian Army. “The other thing I remember about Minsk Square is the statue of the soldier. I remember it vividly because every time my father passed by it, he would salute it.”

“Minsk Square and the aircraft are the first things I saw from my window, when I got to my table at work. And one day, I had to painfully watch it being wrapped up and uninstalled”, said Mr. Sharma, who works in the Hindustan Aeronautics Ltd (HAL) head office that is situated at the Square. The HAL newsletter is titled ‘Minsk Square Matters’.

When the excavations began, the trees that paved the roads towards Chinnaswamy Stadium were uprooted. The canopies that shaded the streets were suddenly non-existent, leaving the road dusty and exposed to the sun. People began complaining, but promises of the forth-coming metro station sounded comforting to some. Others protested. “We made a short film on the uprooting of trees at Minsk Square, and did a bit of talking. I will never forget what Minsk Square looked like then”, comments Shweta. That was six years ago.

The papers published numerous stories on how the pollution levels have increased at the signal at Minsk Square because of the dearth of trees. There were sorry stories on how the aircraft and soldier were stacked up in some attic in a Government building, and others on how the crossroad can no longer hold the aircraft and will henceforth have to be left bare, because the Metro station’s air conditioning unit lay right beneath it. They are going to have http://www.capitalrecycling.com.au/services/building-demolition-services-perth/ come out and demolish a couple building so they can rebuild some new buildings. In November 2015, Minsk Square once again gave everyone a surprise. Overnight, a new aircraft, LCA Tejas, a full scale mock-up model of one of the variants of India’s Light Combat Aircraft (LCA) was installed across the road (in place of the Unknown Soldier), and the white circular edifice is currently being constructed in position of the first aircraft, which indeed, is quite aesthetic to look at. Heads turn, once again, as cars whizz by this crossroad.

With its grandeur and dramatic metamorphosis, Minsk Square has often been the talk-of-the-town. Nevertheless, people continue to be ignorant of its purpose and historic significance.