The Russia-NATO crisis increases the chance Belarus will become a bastion of Moscow.

The controversy over the meaning of what was essentially a Russian military parade on a holiday dedicated by President Alexander Lukashenko as the “Independence Day of the Republic of Belarus” arose almost immediately after it was announced. An impressive array of 9K720 Iskander (NATO reporting name: SS-26 Stone) theater ballistic missile launchers and S-400 Triumf (NATO name: SA-21 Growler) surface-to-air missile vehicles rolled through Minsk, while Su-34 Fullback fighter-bombers flying overhead. It all seemed to indicate that Moscow intends to take tough counter-measures in response to the build-up of NATO forces in Eastern Europe over events in Ukraine. 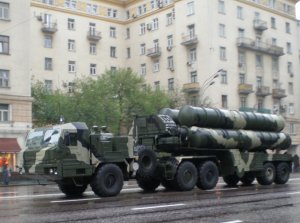 S-400 Triumf launcher during rehearsals for the 2009 Victory Day Parade. Photo by UMNICK via Wikimedia Commons

This appeared to confirm a pledge made two months ago on May 7 by Russian State Duma Defense Committee Deputy Chair Franz Klintsevich, who vowed that Russia would take adequate and permanent measures to counter the deployment of new North Atlantic alliance troops in the region. This foreshadowed an inevitable deployment of Iskander advanced tactical missile systems on the territory of Belarus.

Later, while engaging reporters from the news analysis portal RuBaltic.ru, Igor Korotchenko, chief editor of the Ministry of Defense publication “National Defense,” director of the Center for Analysis of the Global Arms Trade, and a former specialist in Russia’s military command, rationalized that since NATO forces outnumber the Russian Army by a factor greater than 4:1, the Russian command would consider neutralizing any newly developed active threat with the use of tactical nuclear weapons. The Iskander-M system, which according to authoritative sources will be deployed not only in Russia’s Kaliningrad, but also in the western regions of Belarus, can be armed with nuclear weapons in order to carry through with this threat.

The same source suggested that Tu-22M3 “Backfire-C” long-range bombers may reappear on Belarusian airfields. These could be employed in such a situation where tactical nuclear weapons are used, or they may simply demonstrate a seriousness of the threat to use them. Certainly the latter was the case of all the Russian soldiers that manned the weapons systems on parade during the July 3 festivities in Minsk.

The importance of the Iskander

The deployment of the Iskander missile system is apparently intended as an instrument of military policy. A 2012 analytic review by the U.S. Central Intelligence Agency on strategic risks and the global military/political landscape defined the road-mobile Iskander (named for Cold War General Iskander Huseynov), specifically, as a weapon that can change a regional balance if they are simply deployed into a theater. There is a very good reason for this. According to Valery M. Kashin, General Director and General Designer of KBM R&D Corporation, JSC, who oversaw development of the Iskander, the weapon system can hit several targets at once with a range of different missiles. 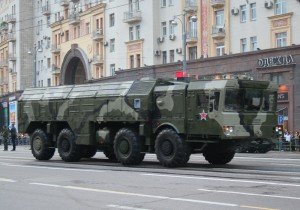 Iskander missile launcher in the rehearsal to the 2010 Moscow Victory Day parade. Photo by A. Savin via Wikimedia Commons

There are five categories of missiles that eventually will make up the advanced tactical system, of which two currently are in use: aeroballistic (ranging up to 500 km, covering most of Poland and Western Ukraine when deployed in Belarus) and cruise (with a range up to 2,600 km, or as far away as Iceland and northern Africa if launched from Belarus). Three more types of missile are being developed for the system. The most important of these, the aerodynamic missile, is a weapon that can be controlled throughout its flight, which can reach an altitude of 50,000 meters (165,000 feet, or 30 miles), through the use of wind and gas-dynamic control surfaces. The missile’s trajectory constantly changes so as to avoid interception or evasion, and it can accelerate on approach to its target at such a rate that the payload sustains conditions of 20-30 g forces. To effectively shoot it down, a projectile must advance on the missile at speeds 2-3 times more than it generally travels, and such speeds are currently beyond presently-known technology. Additionally, the probability of the missile being hit, or even detected, in flight, is reduced as a result of the use of stealth technology.

In order to successfully overcome existing and future missile defense facilities, these systems also use passive and active systems to jam intercepting missiles. As it approaches its target, missiles will fire off chaff and other small jamming devices. As to accuracy, Russian advanced tactical missile systems, such as the Iskander-M, are said to be able to hit within 2 meters of a target within its 500 kilometer range, with a probability close to 100 percent. In order to achieve this level of accuracy, the rocket is equipped with guidance systems, such as inertial and radio controls, GPS and GLONASS referencing, and both laser and optical homing in the terminal phase of flight.

These weapons deliver to the target a payload that includes 54 submunitions, such as penetrating missiles and high-explosive fragmentation conventional warheads. They can also carry nuclear devices. The weapon is made to surgically strike tactical locations of small size and destroy large area targets, carrying out missions like taking out hostile weapons fire, air defense systems and defenses, airfields, and command centers, among other targets.

At the same time, the Iskander is extremely mobile, and its footprint is such that detection by satellite is difficult. Within 1 minute after launching, the Iskander unit can vacate its place of deployment in full radio silence.

An even more effective weapon in the Russian arsenal is the Su-34 fighter bomber, which is designed to attack and destroy heavily defended points both on the surface and subsurface. Nicknamed by NATO as “Fullback,” it can attack in all weather conditions in daytime or night. Its range is up to 4,000 kilometers, 7,000 with aerial refueling. This is about the middle range for strategic bombers like the Tu-16 Badger (still in service), the Tu-22 Blinder (nicknamed by the Russians as “shilo” for its awl-like shape), and the swept-wing Tu-22M Backfire. 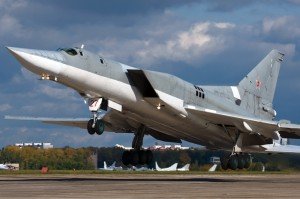 Russian Tu-22M Backfire bomber during take-off. Not shown at the Independence Day parade, these Russian planes nonetheless may soon be based in Belarus. Photo by Alex Beltyukov via Wikimedia Commons

The plane is much better suited to rapid deployment far from home base than many other planes in the Russian air fleet. Because elements of the fuselage and wings use stealth technology, this 40-ton machine generally flies at a low altitude and can be mistaken for a modern cruise missile. Its said that its defenses can destroy incoming missiles at a range of up to 250 kilometers. Its avionics and air-to-air missile arsenal, as well as other armaments seen on its predecessor, the Su-27 Flanker fighter, gives it an advantage in dogfights against most aircraft. Former Russian Air Force Commander-in-Chief Colonel-General Alexander Zelin, today an advisor to the Ministry of Defense, regards the potential of this aircraft well, and expects that it will someday launch long-range missiles that may provide a nuclear deterrent.

Meanwhile, the S-400 Triumf, also shown at the parade, is designed to strike aircraft at distances of up to 400 kilometers at altitudes between 5,000 and 30,000 meters (17,000 to 100,000 feet). Its intended targets are reconnaissance aircraft (such as the RC-135), radar tracking and surveillance aircraft (such as Boeing AWACS), strategic bombers, tactical fighters (including those using stealth technology), tactical ballistic missiles, medium-range ballistic missiles, hypersonic targets, etc. The launch units are said to be able detect targets at a distance of up to 600 kilometers and can be used to protect Iskander launch units from counter-strikes. While they are in Belarus, they are expected to monitor air traffic both within the country’s airspace, and areas approaching the borders.

Given the capabilities of the weapons systems on display, the parade in Minsk and its showcase of the latest in Russian weapons wasn’t so much a show for the local residents as much as it was for spectators from neighboring countries.