Talks next Tuesday to include Putin and Poroshenko

On Tuesday, Aug. 19, the office of Russian President Vladimir Putin, representing the Eurasian Customs Union, announced that a three-party summit would be held a week later in Minsk. Shortly after, Ukrainian President Petro Poroshenko confirmed that he too would accept an invitation to the event, during which the Russian and Ukrainian heads-of-state, along with representatives of the European Union, would discuss the implementation of the EU Association Agreement with Ukraine, maintenance of European energy security, and, expectedly, stability of the situation in the Donbass (the Ukrainian regions of Luhansk and Donetsk).

The immediate questions that followed this announcement for observers in Minsk was what will this mean for Belarus, what made the parties suddenly agree to negotiations, and what results can be expected?

Denis Melyantsou, senior political analyst for the Belarusian Institute of Strategic Studies (BISS), expressed disbelief that there would be much that would result from these high-level talks, but getting the parties to come to Minsk to use the city as a platform for dialogue appeared to him to be a personal political triumph for Belarusian President Alexander Lukashenko.

“Given the strained official relations between Minsk and the EU, I did not think that the EU would agree to participate in negotiations in Belarus,” he said. “Moreover, the West knows that Belarus, as an ally to Russia, cannot maintain itself as a fully independent party to the conflict. Therefore, I could only see the possibility of Belarus acting as a mediator between Ukraine, Russia, and the separatists.”

Experts speculate that Ukraine played a key role in getting the EU to agree to holding the talks in Minsk. Moreover, Melyantsou suggested that Kyiv had employed the assistance of the United States to influence Brussels in the decision in favor of the Belarusian capital as the site for talks. In short, it was Kyiv that convinced all the parties that Minsk was in fact neutral.

“Russia itself never abandoned the idea of negotiations with Ukraine under the meditation of the European Union,” Melyantsou said. “Moreover, Moscow is interested in conducting negotiations with Kyiv in part because it represents the three-country Custom Union, rather than just Russia. Russia has never officially recognized itself as a party to the conflict.”

Belarus has put a large amount of energy into these negotiations in order to increase its international prestige, and to improve its relations with the West. The success of this initiative is seen by experts as a significant achievement by Belarusian diplomats.

“This is a triumph of Belarusian diplomacy and a personal political triumph for Lukashenko,” Melyantsou observed. “Previously, Belarus was a pariah, but now it has become a mediator in settling a dispute of global proportions, and this increases its status as an international player. Now, the United States and the EU speak of Minsk as it had long before, and not just with hand gestures.” 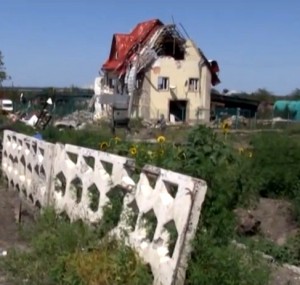 A home in Donbass destroyed during shelling. Separatists have relied heavily on artillery and military equipment supplied by Russia, the supply of which has begun to drain Russia’s economy. Photo by UTR via Wikimedia Commons

Although the main issues on the agenda for these negotiations involve only energy and economics, the real purpose behind them is clearly how to solve the question of the situation in eastern Ukraine. “I repeat that Russia has never recognized itself as a party to the conflict and tries to treat the Ukrainian issue as an economic and humanitarian concern, rather than a military-political one,” Melyantsou said. ”Will there be the flow of gas (through Ukrainian transit pipelines to Europe)? What will happen to the energy (sold to Europe)? From this point of view it is very logical that negotiations should involve not only Moscow, but its partners in the Customs Union.”

There are no expectations that the talks in Minsk will put an end to the conflict in eastern Ukraine. However, there is a distinct advantage for peace in them as all parties will be able to finally express their positions face-to-face to each other. “I am very pessimistic that there will be any outcome to these negotiations,” Melyantsou said, “but I think it is positive that such a meeting will take place at last. I think that the dialogue may continue later in Minsk. It is enough to say that this will be a great bonus for Minsk.”

On the other hand, political scientist Andrei Kazakevich expressed the opinion that talks in Minsk were not much of a surprise. He suggested that sooner or later, such a dialogue was bound to begin.

“The parties have accumulated so many problems that it was logical that this meeting would take place in this format,” said Kazakevich. “The format would not only include Russia, but also the countries of the Customs Union, and not only Ukraine, but also the EU. It was not a question of ‘if’, but rather ‘when’.”

Despite the negotiations being billed as multilateral, experts expect that the main actors will be Ukraine and Russia. Both Kazakech and Melyantsou both agree that the main issue, no matter what the actual agenda says, will be the settlement of the situation in the Donbass.

“I believe that Europe will act in the negotiations as an advocate for Ukraine,” Kazakevich said, “and that this will balance Russia in this dialogue; direct talks between Kyiv and Moscow would hardly have been a situation of equals. Europe will simplify the process for Ukraine.” 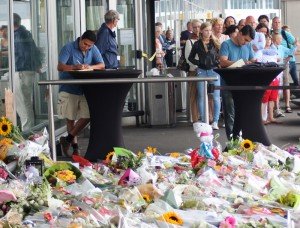 Mourners at Amsterdam’s Schiphol Airport pay respect to victims of MH-17 flight shot down by surface-to-air missiles during Donbass fighting. Ukraine figures strongly as a security concern for the EU in coming talks. Photo by Pejman Akbarzadeh of the Persian Dutch Network via Wikimedia Commons

Kazakevich believes these negotiations are important for the EU as the conflict in eastern Ukraine has a component involving European security. However, he also noted that Russia finds this discussion necessary because of the worsening situation in its homeland. Keeping up a continuous supply of material resources to the separatists, he says, involves too large a drain of money on the Russian economy, and to keep doing this for a long time will prove too much for the state budget.

“If the front stabilizes between Ukraine and that part of its country controlled by the separatists,” Kazakevich said, “then Russia will not need to continue with military aid, and the state budget finances sent to these regions can change in form to paying pensions and actually feeding the people.”

Without negotiations, Kazakevich noted, Moscow risks permanently impairing its image in other parts of Ukraine. “That negotiations were selected to take place in Minsk is not anything supernatural,” the Belarusian political scientist said. “Certainly our diplomats worked in this direction, but a formal meeting was originally planned by the Customs Union to carry out discussions with other external parties (Armenia, Kyrgyzstan, etc.). Holding talks in Kazakhstan was an option that would have been too far away. Holding them in Russia wouldn’t have been acceptable (for Ukraine and the EU). So Belarus was the most convenient and logical choice.”

Kazakevich also noted that Belarus also benefits in other ways from the events in the Donbass. Against the backdrop of Putin’s actions in the fighting in Ukraine, Lukashenko, although still considered a dictator by the EU, does not look as bad, and the problems of democracy in Belarus look less troubling. “Besides, Belarus would be able to defend as an equal partner its economic interests in Ukraine, and clarify its role in the growing trade war between Russia and the EU,” he said.

As to what to expect from the negotiations, Kazakevich refused to predict. He believes that the only outcome that will be revealed to the public will involve only economic aspects. He suggests that any issues related to the situation in eastern Ukraine will be resolved behind the scenes, and that these will not be made public.

“Russia has always insisted that discussions about the situation in the Donbass must be with representatives of the separatists,” he said. “They are not going to be in attendance here, so any public breakthrough agreement on eastern Ukraine is hardly going to be possible.”

Kazakevich suggests that negotiations on these issues will likely continue after next week, but they will not be in as large a format as the coming summit meeting involving both Putin and Poroshenko. “I think that these talks will give rise to new forms of dialogue,” he said. “Perhaps after the Minsk talks on Aug. 26, Russia and Ukraine will find the questions that they will be able to discuss bilaterally.”