Peace celebrations may be a bit early, though

Although Western and Ukrainian media cast significant doubt as to whether the cease fire signed Friday will hold, there is no doubt in the mind of the Ukrainian delegation, headed by former national president Leonid Kuchma, that Belarus has served today’s effort at peacemaking well.

In thanking Belarusian President Alexander Lukashenko for providing the facilities to host peace talks in Minsk, Kuchma described the relatively calm environment in Belarus’ capital as having contributed to the success of the negotiations today. He said it was impossible to not agree that Belarus itself promotes peace and harmony as he warmly expressed appreciation.

The agreement, brokered on Friday afternoon under the OSCE’s Special Envoy to Ukraine Adelheid Tagliavini, called for a ceasefire in the fighting in Eastern Ukraine as of 6 p.m. local time, leaving in place, according to LiveUAMap.com, seven invasion lobes currently occupied by pro-Russian separatists and regular Russian forces: the first encompasses Luhansk and its airport; the second includes the industrial city of Stakhanov and the iron producing center Alchevsk; the third consists of a supply corridor through Yenakievo to Horlivka, a town said to be run like a personal fief by pro-Russian Simferopol-born Igor Bezler (nicknamed “Bes”, or “the Demon”); the fourth encompassing Donetsk; the fifth extending along the N15 highway to Kurakhove, site of the Kurakhovka coal-fired power station; the sixth incorporating a healthy swath of territory that includes a large part of Donetsk Region’s Telmanove District, up to the Kalmius River; and the seventh runs along the E58 Azov Sea coastal highway west of Novoazovsk to Bezymennoye, where intense fighting had taken place earlier in the day.

“Assessing the situation during a meeting with the contact group, I can say that we all spoke the same language, and we all really want peace,” said Kuchma. “In 10 years of fighting in Afghanistan, Ukraine lost 3,000 people. In the three months of fighting… I will not repeat the number we’ve lost, but it is too much.”

According to the Ukrainian National Security and Defense Council (NSDC), as of yesterday, 837 Ukrainian soldiers were killed, while the total number of injured number 3,044. This figure does not include the number of civilian casualties.

Kuchma’s sentiments echoed those of Ukrainian President Petro Poroshenko, who earlier told the BBC that though he is ready to fight and die for his country, his responsibility as Ukraine’s leader was to stop the war and the mass killings of civilians and Ukraine’s military men. 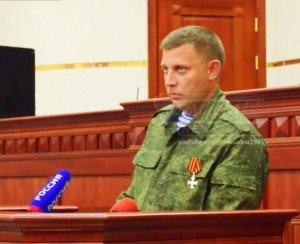 Alexander Zakharchenko, who represented the DNR in Minsk today. Photo by ANNA News via Wikimedia Commons

“Political ambition is not worth a single life,” said Zakharchenko, who had previously demanded Ukrainian recognition of the DNR as a sovereign state before talks could begin.

Plotnytskiy, a former Soviet reserve officer who served in the Ukrainian Inspectorate of Consumer Rights before the fighting, was not as sentimental in tone. “This (agreement) does not mean that there will not be any military movement,” the de facto head of the separatists in Luhansk said. “There was no guarantee that we would agree. There were too many contradictory positions on both sides. But for today, it is very important to stop the shooting, so that we can all go home and restore our infrastructure.”

The LNR leader came to power after the resignation three weeks ago by “People’s Governor” Valery Bolotov after Ukrainian Anti-Terror Operation forces laid siege to Luhansk. “These negotiations were not easy, but we were only pouring sweat over them, not blood,” Plotnytskiy said. “Near the Ukrainian Verkhovna Rada (Parliament) building, they held a demonstration with 50-100 people holding placards say ‘March on the East!’ This is not the first time they’ve (called for the army) to march on Eastern Ukraine. So, let those who call for this take off their masks and march on the east themselves. The majority of people do not want to continue the war.”

Mikhail Zurabov, Russian Ambassador to Ukraine, felt confident that the 12-point cease fire agreement would be sustainable. Among the agreed points was the creation of an ad hoc committee that would monitor compliance. “There is a high level of distrust within the conflict, and there are a lot of heavy weapons on the territory, so a memorandum was a necessity in implementing this ceasefire,” he said. “There are two sides here – Ukraine’s and our negotiating partners. There were a lot of similarities, though, and in three days, we plan to form a single draft document that Kyiv and the Republics can discuss.”

Among the more significant points in the proposal was the exchange of prisoners, the number of which currently exceeds 1,000 men on each side. Zurabov pledged to work out the technical details of the exchange by the start of a teleconference scheduled for Monday, including preparing lists of those to be released, and detailing the delivery of the detainees to their place of repatriation.

Another important point that the rebel leaders brought forward was arranging the arrival of a second convoy of Russian aid, this time delivered under the auspices of the Red Cross. It is scheduled to arrive in Eastern Ukraine on Saturday, when a convoy of 10 trucks will go immediately to Luhansk. In the meanwhile, a second shipment is planned to head into the region by rail, possibly over the weekend.

Update: An unconfirmed report on Twitter indicated that tanks had advanced northward from Luhansk shortly after 11 p.m. Kyiv time, and began firing from the village of Vesela Hora across the Northern Donetsk River into the town of Shchastya, the location of another large power plant. If true, this action would have taken place about two hours after representatives of the self-proclaimed “Novorussia” called a press conference detailing “why Ukraine is breaking ceasefire,” and five hours after fighting was to have ended.

Shchastya is about 20 kilometers north of Luhansk city center on the N21 highway going to Starobilsk in the northern part of Luhansk Region.

Contributing to this report were:

Poroshenko talks about his plan, promised special status areas of the Donbass, and freedom of language – TUT.by

I am ready to die or my country – Poroshenko before signing peace in Minsk – iPress.ua