Since the start of 2010, Belarus and Kazakhstan have been Russia’s partners in the Eurasian Customs Union. Last week, according to a report by the Russian state-run news agency RIA Novosti, the Russian government defined how under the terms of this agreement suppliers in these countries can legally re-export banned Western foodstuffs for supply to the Russian market.

Following the Aug. 6 presidential decree that mandated an embargo on Western foodstuffs for one year, both Russian and Belarusian customs authorities had been actively working to prevent the direct re-exportation of food products that have been prohibited under retaliatory sanctions for importation into the Russian Federation.  “We are working closely with our colleagues in Belarus and Kazakhstan on the subject (of preventing re-export),” said Russian Deputy Prime Minister Arkady Dvorkovich, “as well as with countries such as Serbia and Switzerland in order to prevent such things from happening.” 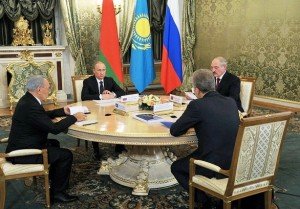 A benefit of being a member state in the Eurasian Customs Union is being able to process banned foods for resale in Russia, a legal way around the embargo. Photo by the Russian Presidential Press and Information Office via Wikimedia Commons

However, with enough processing in one of the other Customs Union member states, produce originating in countries from which importation bans are in effect can still find their way onto a Russian dinner table, according to Russian Prime Minister Dmitry Medvedev. Indeed, under the current sanctions regime, Deputy PM Dvorkovich admitted that Belarus and Kazakhstan are in a good position to “partially win” from this situation, as they will be able to re-process some of the agricultural products that originally went directly to Russia, selling these on the Russian market.

“We need to look at the degree of processing involved,” said Medvedev. “If the processing becomes a significant part of the cost of the product, then it is a whole new product.”

He noted that for such goods, the processing changes the country of origin. Russia, of course, will closely monitor the delivery of such products to its markets, said the Prime Minister.

Medvedev also expressed through RIA Novosti concern about the control over transit of goods through other Customs Union countries into Russia. “In recent days, there were reports that there was a risk of the transit of consignments of goods from countries that have come under the ban, through territories of third countries,” he said. “That is, where shipments are initially made to destinations that are not in the Russian Federation.”

In response to this, customs authorities between Russia and Belarus have acted in a way designed to prevent the transit of embargo-forbidden items into Russia, according to the State Customs Committee of Belarus.

“In order to implement (President Alexander Lukashenko’s) instructions in full transparency and in conjunction with actions of the Russian Federal Customs Service, the State Customs Committee shall develop an approach used in the administration of customs on goods prohibited for import into the Russian Federation as they move through the Belarusian section of the border of the Customs Union,” its statement read. 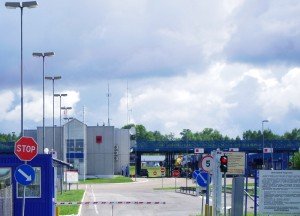 The Committee emphasized that this agreement complies with all international obligations to which Belarus is a party, and it should not obstruct the legitimate movement of goods across any of the Republic’s borders with Ukraine or neighboring EU states. The main change brought about by the collaboration is that when it administers goods in transit to the Russian Federation, Belarusian customs authorities will perform individual searches on behalf of Russian authorities to ensure that shipments do not contain items prohibited to be imported into the Russian Federation. If such goods are found, Belarus will render a decision on whether to turn back such shipments to the neighboring state from which they arrived.

In the first week of August, Russia limited imports of selected goods from countries that imposed economic sanctions against it over that country’s annexation of Crimea and its continued support for separatists in the Ukrainian Donbass region. Among items in the sanctions list targeting the United States, the European Union member states, Canada, Australia, and Norway are the following foodstuffs: beef, pork, poultry, fruits, vegetables, cheeses and dairy products, and nuts.

Despite the concerns expressed by Russia, though, there doesn’t appear as yet to be much of an attempt by foreign food suppliers to use Belarus as a transit country for these banned items. “Daily monitoring of deliveries from abroad to the domestic market of Belarus of meat, fish, dairy, fruits, and vegetables indicates an absence of significant changes in volume and structure,” the State Customs Committee reported.

Translated from stories by RIA Novosti and TUT.by