Making friends is just a social network away

Social networking emerged with the advent in 1997 of the SixDegrees website, and erupted as a social phenomenon less than a decade later with the meteoric rise of FaceBook following its founding in 2004. Today, social media has become so prevalent in modern life that a United Nations Special Rapporteur in 2011 described access to it as being tantamount to a fundamental human right.

On Sept. 11, 2007, nearly seven years ago, former German TV journalist Malte Zeeck teamed up with Christian Leifield and Philipp von Plato, both former consultants for McKinsey & Company, Inc., and created from Munich, Germany, a special social media network designed specifically for expatriates and others with a “global mindset” called Internations. It has since become a unique online network that offers both the chance to meet locally in real life with other “globally-minded” people and to network around the world with members in other cities where Internations maintains a “community”.

“Internations focuses on the expat’s situation related to people,” said Zeeck at a monthly gathering in Santiago back in May 2011. “It’s a niche topic. We try to make it easier for people to meet other people when they’re going abroad, when they’re moving somewhere – to meet other people and find expat-relevant information, on the country, on where to look for all these things I just mentioned, that’s our main added value.”

Toward the end of November 2012, five years after Zeeck and partners founded the network, Internations held its first gathering in Minsk at the Mixx Pub Club. There were perhaps 25 people in attendance at the gathering, all of whom had been eagerly looking forward to the first meeting in Belarus for several months. The community’s leaders, called “Ambassadors” in Internations parlance, were Dutch writer Jan Alons and Danish education and social project expert Gabriella Furusjo Temel, and their first effort appeared to be seamless. After some time, Jan stepped down in favor of first an American, and then a Russian-Israeli co-ambassador. Today, the community is headed by a team consisting of Temel and Indian trading executive Puneet Shrivastava, both of whom ensure the smooth organization of events for the growing community of globally-minded expats and locals in Minsk.

A couple weeks ago, Minsk Herald caught up with both Internations Ambassadors by Email and asked them a few questions about that social network’s Minsk community and how the two of them see their role here as its representatives. 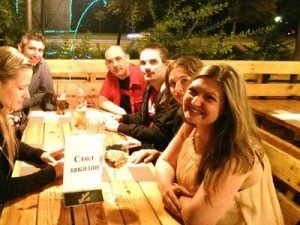 Gabriella Temel, far right, sits at the table with members of the Minsk Internations community at their August event, held at the Three Musketeers Pub off Kastrychnitskaya Street near Concert Hall Minsk. Photo via Gabriella Furusjo Temel

MH: Internations is a worldwide network of globally-minded people designed to create communities in just about every far-flung city on the planet. Before you and Jan Alons stepped up to organize the Minsk chapter, Minsk wasn’t really anything more than a few people suggesting that maybe we should meet. When you stepped up to the role, what was your vision of what you wanted the community to become?

GT: I think that in the beginning I didn’t have a defined vision for InterNations – When I arrived in 2012 there was very little going on in the city at that time and I felt very isolated as a foreigner. To start with, Internations was, as you say, a group of expats suggesting that we should meet up. However, as time went on, I saw that we could move beyond our small expat circle and create an actual community in Minsk of like-minded members, not just limited to expats. With time and effort (and a lot of patience) the community grew and we started thinking of other ways that we could branch out and support the Minsk community. For example providing regular meet-ups for families, fostering business development and networking in Minsk, and now Puneet and I are planning to host a festival in Minsk to foster social cohesion in the community and getting embassies and Minsk businessmen to help sponsor our efforts.

MH: In some cities, Internations is managed as a team, in others it’s been organized by a single individual. In Minsk, you’ve operated under a team approach. Is this a preference? What are some of the advantages? What are some of the past contributions of former co-ambassadors that you most appreciate?

GT: To be honest I prefer the team approach! Not just having a back-up for personal reasons such as if I am travelling or sick, but also the fact that we get to trade ideas, and discuss from other perspectives what we could do better. Puneet for example, has been wonderful in that he has come up with a lot of new ideas and ventures that could work for the community, given his local experience and many years as a businessman here in Belarus. As a foreigner you are limited as you do not know or understand things from a local perspective and also, for me, there is the language barrier as I do not speak fluent Russian. Yulia Schweng (the Russian-born Internations Ambassador that preceded Puneet) also was great in that aspect as she had a lot of initiatives and could help in dealing with the local community. I think for Belarus the mixed combination of foreign and local Ambassadors works best.

MH: Briefly describe your background as it relates to your role as co-ambassador.

GT: I came from a very international background, so I grew up all over the world. My husband works for Turkish Airlines, so we are a multi-cultural family. We were stationed in Ireland for six years before our posting in Minsk, where I worked with international corporations such as eBay and IBM. I feel very privileged that I get to travel, work, and meet so many different cultures and people as I believe travel broadens your mind and makes us more accepting of other races and cultures. As well for my child, I feel privileged as a parent that I get the opportunity to introduce him at an early age to other languages and cultures. He is four years old and speaks English, Turkish, and Russian as he goes to a local kindergarten. Being multilingual is an enrichment to one’s life and future.

MH: The community here is an odd mix of Western expat and former Soviet individuals, with smaller representation of Asian and African participants. How have you handled the cultural differences, getting people to mix?

GT: Yes, the Minsk community has an odd mix of (Western) expats, locals, Asian, and African participants but I see them as all the same, in that the Internations community is made of like-minded people. They are looking for essentially the same things – to meet expats and locals in an environment where they can make friends and contacts, meet for social activities and have some fun!

GT: Nah, even Russians need friends! Joking aside, I think that every time you have a mixed community, you have to handle issues sensitively. As we are a social community of friends and not a political community, any form of racist or derogatory behavior is not allowed for our members. Regardless who it is, they will be told in no uncertain terms that such comments are not allowed! People come to have fun, not propagate a political agenda.

MH: What are some of the favorite things you enjoy about your role as co-ambassador?

GT: I have a lot of fun with our members and I really enjoy meeting new people. As well, you get a personal satisfaction when you feel that you are helping others in some way.

MH: What are the biggest challenges and what do you recommend that co-ambassadors do to prepare for the role?

GT: There are always challenges when you are growing a community, but what I could recommend co-ambassadors is to be open to new things, don’t compare the local community to your own culture or country – they will always be very different. As well involve the local community in taking responsibilities for events, networking, etc. as this is very beneficial to their own local community. 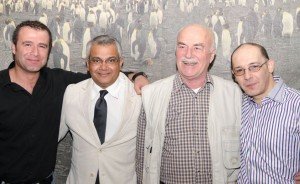 MH:Describe your background as you feel it relates to your role as co-ambassador.

PS: Originally I am from India. I lived and worked in many Asian countries before landing in Moscow back in 1990. I have lived and worked in Moscow for 20 years. Since my wife is from Minsk, five years back I decided to move to Minsk from Moscow. Since I have lived in this part of the world for quite some time, I understand the language, culture, and local issues. I also understand what a foreigner would feel or need when he or she moves to Minsk. Despite being a beautiful city, Minsk still is way behind many Western cities in services. I am trying to fill the information gap between the expats and locals and I will try to provide trustworthy information to both these parties as co-ambassador.

MH: Describe in your own words, with your own vision, of what Internations is about.

PS: I feel Internations in Minsk is a social networking club that helps newcomers to meet fellow expats and exchange information about all aspects of life. It’s also a platform for locals to meet the foreigners. It brings people of different nationalities together. Internations in Minsk has grown in last few years. I feel it’s the right time to introduce business networking events among our members. Many local companies are interested in offering their goods and services to foreigners and Internations gives them an opportunity to meet target customers under one roof. Similarly, foreigners can expand their businesses by meeting reliable local partners.

MH: How do you see your role and contribution to the community in your collaboration with Gabriella?

PS: Both Gabriella and I would like to take Internations to next level now. As I mentioned earlier, the Minsk Internations community is growing gradually. Our membership profile is quite diverse. We can divide the Minsk Internations community into two parts: 1) the business community 2) the non-business community (spouses of business people, visitors, students etc.). We have some of the following ideas or our non-business community (for which we’d like to negotiate discounts for members for products and services we’d eventually like to develop). First, connect with local companies, people who can provide visitor invitations, visa support, and work permits, and who can help our members incorporate and maintain local companies. Most foreigners who visit Minsk for either short- or long-term can benefit from such services. Second, interact with companies that can provide domestic help. Third, collaborate with restaurants and supermarkets that can issue discount cards to our members. We’d also like to organize more industry-specific business events that are purely for the business community. We’d like to involve other business clubs like the Association for European Business, various Asian business clubs, etc.

Internations in its earliest years operated as an invitation-only policy, but this policy has recently changed, allowing interested expatriates the chance to join up just by visiting their website. Meetings in Minsk are held at different restaurants, bars, and night spots each month, with the next one happening in the coming weeks. If you feel you’ve an international mindset, and have a strong desire to make new friends who have come to Minsk from around the world, visit their webpage.