Analysis of the profitability of Belarusian ruble (BYR) deposits (in USD equivalents) indicated that their value had fallen below 1 percent per month in September. This shows that Belarusians have ceased adding rubles to their savings.

The attractiveness for individuals to save rubles has constantly dropped as a result of the graduate reduction of interest rates given to ruble deposits made in Belarusian banks. In January 2014, the average compound rate on new deposits offered to the regular client was 46 percent, which provided 2.54 percent monthly income in USD (taking into account BYR-to-USD depreciation of 1.3 percent per month). However, in September the average compound rate fell to 27 percent, which provided the USD equivalent of 0.75 percent per month for BYR account holders.

In August, the monthly income for new ruble term deposits was 1.28 percent in USD equivalent spending power. The significant drop to 0.75 percent resulted from the National Bank depreciation of the ruble; the dollar increased in value against the BYR by 1.5 percent in September, as compared with 1.1 percent in August.

The average compound rate given for new term deposits made in foreign currency in September was 4.7 percent, which produces 0.39 percent interest growth for depositers per month. Despite the decreasing rate of interest, though, deposits in BYR generate twice the profit at banks than do deposits in other currencies. Nevertheless, the advantages of saving money in rubles have diministed, and Belarusians are now more likely to change their preference to saving their money in US currency. 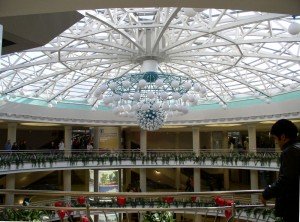 Stolitsa shopping center under Independence Square in Minsk. Shops have increased their currency holdings following what appears to have been a wave of spending in September. Photo by Hanna Zelenko via Wikimedia Commons

It is time to spend money

Belarusians appear to no longer have any tendency to save any money of any kind. According to the National Bank, the “transferable deposits of individuals” (funds that are in their current accounts) decreased since August by 6.2 percent to 12.8 trillion BYR (1.2 billion USD). In August, these deposits had actually increased by 8.2 percent. That means the populaion was saving money in August and spending it in September. Moreover, the value of the cash in circulation diminished by 3.6 percent in September to 14 trillion BYR (1.31 billion USD). This seems to indicate that people spent their ruble savings during that month.

The amount of money placed into non-transferable (term) deposits in September increased by 2.4 percent to 32.2 trillion BYR (3.01 billion USD). This amounts to roughly the amount of monthly interests made on such deposits, and it seems that people have neither taken money away from these nor added to them.

Since people spend money, businesses have profited from this situation. In September, funds in the current accounts of commercial enterprises have increased from those held in August by 11.1 percent, reaching 15.4 trillion BYR (1.44 billion USD). Nontransferable corporate deposits increased by 6.6 percent,reaching 21. 7 trillion BYR (2.03 billion USD). Ruble savings of legal entitites have grown for the second month in a row.’

In general, the M2 money supply (currency in circulation, traveler’s checks, checking accounts and other checkable deposits, savings deposits, time deposits under 100,000 USD, and money-market deposit accounts for individuals) has increased by 2.4 percent to 96.1 trillion BYR (8.98 billion USD). This compares unfavorably to 6.7 percent witnessed in August. Indeed, the growth rate of rubles in Belarus’ banking system has fallen, which may reducle slightly the problem with excess ruble liquidity in the country’ banks. 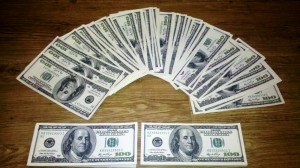 People are not only getting rid of their Belarusian rubles, but also their foreign currency bank holdings, according to recent analyses. Photo by Milad Mosapoor via Wikimedia Commons

This tendency to abandon the practice of saving money not only affected Belarus’ ruble, but also foreign currency deposits in Belarus. These declined in September for the second month in a row.

The change in attitude witnessed in Belarus’ population in September can be attributed to several reasons. The fall of interest rates have reduced the attractiveness of leaving money in the bank. People have made seasonal purchased in early autumn. Inflation has made it more difficult for people to save money in bank accounts.

Despite the significant decrease in legal entity currency deposits, the amount of foreign currency deposits for both individuals and business in ruble terms have declined by only 0.2 percent to 122.3 trillion BYR (11.4 billion USD).

The M3 or broad money supply (M2 plus large and long-term time deposits) rose only by 0.9 percent, reaching 230.3 trillion BYR (21.5 billion USD). This was attributed to a reduction of foreign currency spending in Belarus.

Translated from “Belorusy i rynok”