Why did Belarusian carpenter invent a wooden bicycle in 1933 and whom did he sell it to? How did a Senior Researcher of the Pinsk museum “wangled” the pictures for Polessye Tretyakov Gallery from the Minister of Culture of the USSR? Where is  Yakub Kolas’ couch located and how it does it look? We will find it out in the Museum of the Belarusian Polesie.

The Museum of the Belarusian Polesie is located in the building of the former Jesuit College in Pinsk. It is considered to be one of the oldest buildings in Belarus.

The culture institution has been receiving visitors since June 1, 1926.  Nowadays six halls are located in the building of the former collegium. They inform about the art, history, nature, urban lifestyle of the region in 1900-1939 years, local arts and crafts, as well as some facts about the Great Patriotic War.

We started the acquaintance with museum from the hall dedicated to the trades and crafts of the people Polessye. For young people the presented objects are a part of history. In some villages though they are still used  by watchmen.

The first room of the hall tells about weaving and agricultural activities of the people of Polessye.

Towels, items of clothing are located in stands. You can see also a loom in the corner.  The particular interest is aroused by the chest with bride’s dowry. 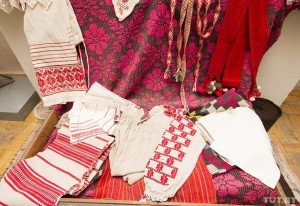 ‘The presence of towels in the chest was compulsory and their quantity should be minimum 20-30 pieces. The chest should also include pillows, bedcover and bride’s clothes. In addition the girl had to weave a waistband for her husband,’ explained our guide Anna.

Nearby there is a stand with wooden wares which were used in household and a small washtub with a shovel is settled lonely on the floor.

‘This is what we call an ancient washing machine.The linen was soaked in the washtub and it was beaten with the help of shovel that was called “pracha” or “pralnik” ,’Ann told us.

There is one more interesting exhibit not far from the ancient “washer”. This is a wooden plate with ribbed surface which was used to smooth out towels.The prototype of the iron included a smooth wooden stick on which the fabric was reeled.

Moreover the hall houses homemade barrels, buckets, mortars, churns and a wooden “thermos” in which shepherds brought  water, milk, or something stronger to pasture.

The only in Belarus homemade wooden bicycle which was produced in 1933 year is worth special attention. It was bought for 10 zloty from a peasant  Vasiliy Ilichuk who lived in village Bogdanovka of Pogost -Zagorodsky commune of Pinsk district. 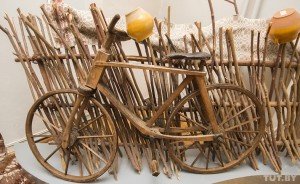 ‘There were iron bikes at that time but they were very expensive. He had seen such a bike and decided to make his own out of wood. After that he rode his bike to the fair in Pinsk. Museum workers could not lose an opportunity to buy this exhibit. Since then It has been here and it still serviceable,’ explained Anna.

Not far from the bicycle you can see the clothes of a  rustic dandy of the beginning of 20th century. Straw shoes, bags, a leather purse are presented here. 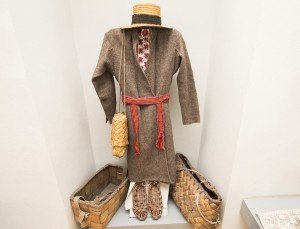 Outfit of a rusitc dandy

‘There is a portable cradle which a woman took when she was going to fieldwork,’ noted the guide.

The acquaintance with the first hall is finished at the reconstruction of a blacksmith’s workshop. 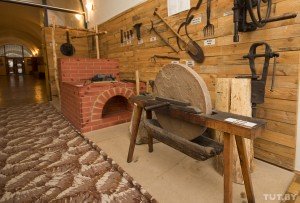 From the ethnography we smoothly turn to the history of Pinsk land. Objects and fragments which were found during archeological excavations are represented in the showcases. They are primeval tools, women’s jewelry of the first century BC – second century AD. A tooth and a part of mammoth’s bone, which were also found in Pinsk land are the main attractions of the room. 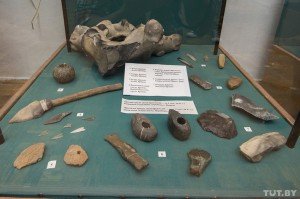 On the rack you can watch the reproduction of a funeral cremation rite.

‘Our ancestors buried the dead in such a way. It was believed that with the help of the fire it was easier for the soul to get into another world. Moreover earlier the ancestors’ ashes were stored in cellars. Hence the name “cellar” which in Russian derives from the word “pogrebenie” and literally means entombment has originated. Why the cellar is still considered to be a special place in the house? This is because the cellar is the place of ancestors,’clarifies Ann.

Also a fragment of a wooden boat is represented in the room. Pinsk citizens used such boats for sailing.People say that some of these boats could carry cargo with weight up to 8 tons..

The sarcophagus of the 12th century which was found in Turov is situated next.All in all three sarcophagi were found. This one was made out of pink slate. Most likely it was brought from the Carpathians.  It is unknown whom it was directed to. They were found already empty. According to one legend Prince of Turov ordered these sarcophagi for his daughters who died in an accident. He grieved for the loss so hard that ordered the sarcophagi for them.

After the sarcophagus we proceed to the  room dedicated to the spread of Christianity on the land of Pinsk.

“This is a stone cross “woman”. It is supposed that such crosses were remade out of pagan idols. There is also a legend according to which these crosses sailed to Pinsk by  river against the current ,’ explained Anna. 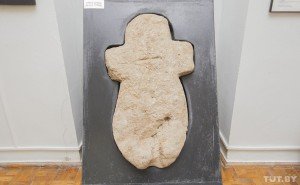 A separate hall of the museum is dedicated to the Great Patriotic War. The presented exhibits acquaint visitors with the history of creating the first partisan unit, partisan movement and the tragedy of Pinsk ghetto.

Life in a big city…

There’s a hall in Pinsk museum which is dedicated to the life of citizens in the beginning of the 20th century. The interior of a citizen’s apartment has been reconstructed. Among the exhibits numerous photographs of Pinsk, a telephone, a samovar, a gas-burner, a clock, a table, chairs, a gramophone, a wardrobe, wall decorations are presented. Some of the items were brought by the local citizens. 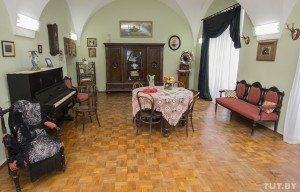 Interior of a citezen’s apartment of 20th century

‘ Sometimes grandparents died and their relatives would bring some of their stuff themselves. There’s a clock which were in the museum when it was opened in 1926. With the lapse of time they turned into an exhibit,’ explained Anna.

Quite a unique object can be found here – Yakub Kolas’ couch. According to the staff f the museum this exhibit used to be in the house where the writer lived. 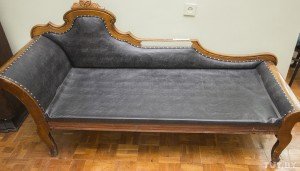 A rich collection of fine arts is another specialty of Pinsk museum. The total artistic fund of the museum amounts around two thousand paintings. A few dozens of them are famous genuine works of well-known artists of the 19th-the beginning of the 20th century. According to The Evening Brest during one of party forums a coworker from Pinsk museum Vladimir Borovik was nudged to create a an art gallery on hearing the words of the General secretary of the Central Committee of the Communist Party of the Soviet Union Nikita Khrushchov. On one the party forums he pointed out at the disadvantage of the work of the Ministry of culture. Thousands of canvasses gathered dust and were inaccessible to the laboring public while at the periphery people remained uneducated and continued going to the church.

The enthusiast appealed to the leading museums of the country with a request to give him a share of the Art Fund. Then he went to Moscow where according to a legend he spent three days in a reception-office to arrange a meeting with the Minister of Culture of the USSR Ekaterina Furtseva and finally he succeeded in meeting her. From the art critic’s trip ensued the minister’s decree which obliged all museum of the country to contribute to the organization of an Art Fund in Pinsk.

According to The Evening Brest eight unimportant canvasses were relinquished to Pinsk by the Tretyakov Gallery. A few dozens of paintings by contemporary soviet artists were submitted by the Directorate of Exhibitions of the State Art Fund of the USSR. The majority of the exhibits arrived from the Art Museum of the BSSR. Among them there are canvasses by well-known Russian artists of the 19th – 20th centuries such as Ivan Shishkin, Victor Vasnetsov, Vasily Polenov, Vasily Petrov, Iliya Repin, Nicolay Kasatkin, Michael Lebedev, Emanuel Aladgeanov, Konstantin Makovsky, Leonid Solomatkin, Belarusian artists Vitold Bilynitsky-Birulya and Yudel Pen.

For schoolshildren, college and university students – 7,000, with a permission to take photos – 8,000

For children up to 7 years old, orphans, veterans of the Great Patriotic War, physically-challenged, conscripts the entrance is free of charge.