Little changes in  monetary policy are planned in nearest future

“The predicted value of the USD/BYR exchange rate used in policy documents for 2015 is 10700-10800 BYR”– said Nadezhda Ermakova, National Bank’s Chairman of the Board.

However, she clarified that this rate may be different at the end of the year, because currencies of the major trade partners depreciated significantly. This remark was very much to the point, as the rate reached 10.710 BYR / USD later on. If the current rate of ruble devaluation is the same, dollar will be worth more than 11.000 by the end of the year.

Ermakova emphasized that this effect was not as high in January – August 2014. The exchange rate of USD/RUB fell by 13% since the beginning of the year, while the real exchange rate of RUB/BYR had increased by only 2.6%  during that time. N. Ermakova decided not to focus on recent Russian ruble collapse and its influence on Belarusian economy.

She also said that National Bank would continue to conduct exchange rate policy aimed at smoothing fluctuations in the exchange rate of the Belarusian ruble. Besides, bank also has such goals as reducing inflation, maintain stability in the foreign exchange market and uphold the competitiveness of local enterprises at the foreign markets. 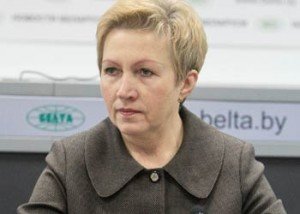 National Bank’s Chairman of the Board Photo: BELTA

Apparently, she is so confident, because gold and foreign exchange reserves are relatively high.

“Our reserves, they aren’t decreasing.  Indeed, it would be good to make them larger. It always sleeps easily when there is stock. We estimate that our foreign exchange reserves will be at the same level as in the beginning of the year. We have slightly improved turnover, I mean trade surplus, and import has decreased. I see no problems on the retail forex market “– said Ermakova quite optimistically.

Of course, the National Bank is not going to spend all currency reserves. “It is very important to sustain reserves at the same level, as it provides economic security for the country. Government and the National Bank are carrying out a set of measures to refinance external and internal liabilities. In particular, the National Bank expects to raise external funds. Moreover, it is going to use internal sources of financing. In addition, in 2015, government plans to use revenue from charging customs duties on oil products and taxes on export of crude oil, which was produced in Belarus”.

Ermakova told that Belarus is going to obtain the sixth tranche of the EurAsEC Anti-Crisis Fund. A new letter of intent was prepared for EurAsEC, it was send to the committee for further approval.

Besides searching for the new sources of currency, the National Bank is trying to reduce the share of dollars in foreign trade. Chairman of the Board reported that Russia’s largest oil and natural gas exporters negotiate with Central Bank of Russia to assess the possibility of conducting settlements in Russian rubles.

The decision about stimulating settlements in Russian rubles was taken at the Interbank Currency Council of Central Bank of Russia and the National Bank of Belarus.

Ermakova noted that the US dollar share in payments between enterprises of Belarus and Russia occupies only 20 percent. 70 percent of foreign trade operations of legal entities are served by the Russian ruble. According to her, the further growth of the share of national currencies in mutual settlements will increase the integration of financial markets, minimize operating costs and reduce the country’s exposure to geopolitical risks.

Ermakova stressed that such a choice won’t bring additional time or cost expenses to Belarusian businesses. The main burden will fall on the banking systems of the two countries. In particular, it is the creation of additional operating reserves in national currencies, development of infrastructure of the financial markets and the coordination of currency legislation of the parties.

At the same time, she reported that the issue of the common currency for Belarus, Kazakhstan and Russia isn’t essential in midterm, since its introduction is the final stage of the integration process. It is assumed to use local currencies in Eurasian Economic Union in the near future.

The National Bank desires to integrate with Russian financial markets. This could lead to problems due to sanctions against certain Russian banks. However, according to N. Ermakova, sanctions will not affect the condition of Belarus banking system, although the diminishing of finances provided by Russian banks is possible

According to the chairperson, banks don’t see prerequisites for decline in financing. “They may reduce funding in US dollars or Euros. Russian ruble financing would be the same. For Belarus, it is not critical, because transactions between Belarus and Russia are in all currencies – US Dollars, Euros, Russian rubles. It depends on contract. I see no problems for us in reducing of finances in banking system “, – said N. Ermakova.

However, it is not excluded that banks will shift from one currency to another. “But it creates no problems, -she said, – banks conducted a stress test, the National Bank discussed the problems with each of the banks and found no possible problems”.

At the same time, N. Ermakova noted the existence of impact of sanctions to Belarusian economy in general. But these difficulties can be solved. “Somewhere payments are frozen, but we have the opportunity to choose the bank, which was not affected by sanctions. Clients should work on these questions with their banks. They can use Belarusbank or Belagroprombank. It doesn’t matter. All banks have a very wide system of correspondent accounts abroad. There are absolutely no problems for clients, “– said N. Ermakova.

Translated from “Belorusy i rynok”