Minister of Economy Nikolai Snopkov  shared his vision of the situation

Today even the Belarusian housewives are discussing situation in the Russian economy. The constant fluctuations of the Russian ruble and the decline in international oil prices worry citizens. Everyone wants to know an answer to the question how the events in Russia will affect the Belarusian economy?

– Mr. Snopkov, one of the hottest topics today is events in the Russian economy. Russian Ministry of Economic Development has recently revised forecast growth rates and now expects that the GDP will decline in 2015 by 0.8%, investments will decline by 3.5%. What is your forecast for the situation in Russia and how will it affect Belarus?

– Russian experts, including governmental employees have several scenarios of events in 2015. One of the main factors that affect the situation is the price of oil. If the oil price isn’t below 80 dollars for barrel, a level of Russia and ours economy will be quite good.

Oil prices below that level are an undesirable situation. If we talk about the impact of this factor on our country, the decline in oil prices by $1 means a $20 million decrease of surplus in oil and petroleum products trade during the year.

Still money, but not critical. Weakening of the Russian ruble influences much greater. It primarily results in a reduction of our exports in dollar terms.

– The Bank of Russia has previously stated that it sees five possible scenarios for the development of the Russian economy in the next year depending on world oil prices. Belarus has approved the official forecast for 2015 (with GDP growth of 0.2-0.7%). Which situation should be at the Russian market, so we would achieve these goals?

– Indeed, Russian and Belarusian economies are tightly connected, so it is indisputable that changes will affect Belarus. I can say that our GDP is half-dependent Russia’s one.

On the other hand, the Belarusian exports make only 4.5-4.6% in Russia import. We mostly supply oil products and food; this is the last thing they will refuse to accept. Therefore, we do not expect to reduce the export of these goods to Russia.

The other investment products (primarily – engineering products) according to our estimates, has already reached the bottom mark. We assume that the export of these goods in physical term remain the same as in 2014.

Taking into account all the factors above, we aren’t inclined to link the capabilities of our economic growth in the coming year exclusively with the growth in Russia. If GDP decrease in Russia happen, it will not be big.

The development of the internal market as a part of a program of import substitution is fine, if Russia will hold Eurasian Union requirements.

In the summer, you said that the main objective of the economic policy in 2015 is to reduce inflation. Why have we stopped on the figure of 12% in determining the rate of inflation for the next year?

– We tried to find a balance in this regard. A sharp slowdown in inflation would require the formation of a tighter macroeconomic policy and would lead to a contraction in domestic demand. We feel this way is inappropriate, given that our actual economic growth is below potential.

12-percent inflation is a balancing option. It allows you to support economic activity, providing a small but positive dynamics of GDP. At the same time, we plan to have 12% inflation, but slowly move it down during the year. 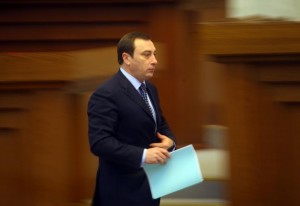 – The population is always interested in wages dynamics. The government connected growth in wages with the labor productivity growth. What growth in real (inflation-adjusted) wages can be expected in 2015?

– Economic growth determines the increase in real incomes. We plan real wages to increase within 1.1% -1.4% next year. This value is low, but after all positive.

Despite of the difficult situation in the world economy and our problems associated with it, we will have sustainable growth and maintain already achieved level of welfare. That is the ideological meaning of our forecast,

But you asked an accurate question: growth can be expected. At the same time, in a response to the worsening economic situation in Russia, the situation can develop in a different way at the different enterprises.

You should understand, that increasing of competitiveness of our products in Russian market will take place only if expenses fall down. While the labor expenses take 30% of the total expenses.

– Income of the population now depends on the efficiency of enterprises. At the same time, the effectiveness of a number of state-owned enterprises doubtful, considering that they receive state support. How and when it is planned to reform the state aid system.

– We are working on this issue right now, and a new system is to be introduced in 2016. All the financial resources will be allocated through clue point – “Development Bank”. What are the advantages of the new method?  Ideology. This is a clear response to the request of the President to be pragmatic while supporting state enterprises.

Selection of companies, which will receive state aid will be made in the form of competition. We will support exact projects with clear cost and result. Finally, this will lead to a fact that only profitable and effective projects will receive support.

– According to the World Bank, to improve the efficiency of enterprises we need to change the number of employed workers. Many of our businesses operate today to provide employment. Are there any plans to reform the labor market?

– It is very important not to make sudden movements changing the social sphere. There are different ways to achieve this. For example, to increase labor productivity we can transfer non-core divisions for outsourcing.

This approach allows, on the one hand, to save jobs, on the other – to increase labor productivity due to the fact that the some units are not directly engaged in production but converted into separate entities.

Reform of the labor market is to happen in 2015-2020 to increase labor productivity. However, in accordance with the recommendations of the World Bank, it is necessary to do the preparatory work for the social protection system.

– Obviously, progress in the efficiency of Belarusian enterprises can occur as a result of the  foreign investments in the country. In autumn, you took part in the Belarusian Investment Forum in New York and London. Did you get exact agreements with investors?

– We had an important meeting with one of European banks with assets more than 5 billion dollars. It showed interest in acquiring the bank in the Republic of Belarus. We discussed “Belinvestbank” as one of the possible variants.

Bank is interested not only in financial area, but in travel also. They are planning to purchase a few hotels in Minsk or other cities.

In addition, the world largest manufacturer of building materials – CRH (Ireland) is going to expand their assets and buy cement plant here. This project is important for us, because competition with Russian factories becomes more and more strong. Therefore, we need technological improvements, in order to save our market share.

– International financial organizations link the efficiency of the Belarusian economy with the development of the private sector. What reforms should be done to improve it? What direction will Ministry of economy and government take?

– As part of the program, together with World Bank we formed the strategy for development of small and medium enterprises in the medium term. We expect World Bank to invest up to 150 mln dollars in the plan.

One of the key elements of the program – the creation of the organization for the promotion and development of small and medium-sized businesses. Today we form with the World Bank experts design a new organization and focus on large-scale projects. It is expected that the new structure will be set up to July 1, 2015.

One of the key elements of this program is a formation of the organization, which will promote and develop small and medium-sized businesses. We are working on this organization with experts form the World  Bank. We will focus on the large-scale projects firstly. The new organization is planned to be set up in the July of the next year.

Today, small and medium enterprises need not only typical loan for development, but also access to business education, counseling, support in foreign trade activities, financing startups. Therefore, the range of tools to support small and medium-sized businesses will be much wider and, at the same time, more focused.

However, the main direction of the reforms in the private sector is to create a clear vision among Belarusians, that medium and small-sized businesses are the future of Belarus.

– It is more 5 years since you’ve been the Minister of Economy. Would you like to enter the Belarusian history as a reformer?

– Neither me nor the Ministry of Economy team are reformers. We are pragmatists. Pragmatism in our work means finding and offering trade-offs between what is right and what is possible under the given conditions.

For example, the year of 2011. There was an acceleration of inflation and the bad situation in the foreign exchange market. It was likely that we abandon regulation expenses of enterprises. However, our calculations and our forecasts show that it is necessary to make reforms; otherwise, we would have a shortage of goods in the domestic market.  Later, when the situation returned to normal, it became clear that we were right and that the availability of goods is much more important than its price.

Therefore, in order to foresee the consequences, we try to analyze the future. Technology can not be foreseen, so we try to imagine what the person of future will be. Not the economy creates man, man creates economy.