How much does it cost to keep a yacht? Where can you get a driving license? Why is it not so bad to go sailing in Minsk Sea? For this reason,  we went to Minsk Sea to sail a yacht and speak with the skipper Pavel Nedvedsky.

Pavel showed us the interior of his yacht: there are a deck cabin and three sleeping cabins. They have eight couchettes, so everyone is close together. There are some conveniences inside: a toilet, a shower and hot water. There is a cupboard and a small kitchen with a cooker and a fridge. Pavel says that it’s possible to live all the time on the yacht – if there is fuel and fresh water. A few years ago, the Jedai, the name of the yacht, was the largest sailing yacht in Minsk Sea. Her length is 9.7 m and width is 3 m. But now there are three sailing yachts one ft. (30.48 cms) longer than the Jedai . So you can feel the difference, but not much. The Jedai was made in Poland like many other yachts in Minsk Sea. It’s cheaper than buying a sailing yacht in Russia, even with customs clearance.

There are sailboats and motorboats, very small and huge, lacustrine and nautical. Jedai is a lacustrine yacht. The sea gauge without centreboard is 35 cms, so it’s easy to float above the rocks. The center of gravity in a sailing ship works like a”tilting doll”. So it’s not so easy to turn the sailing ship. Pavel Nedvedsky said that he likes to go sailing 2-3 times a week for a few hours.

“A sailboat is definitely a romantic place – Pavel Nedvetsky said. – A motorboat is not. A motorboat makes a lot of noise. But when you go sailing you can feel the silence, serenity, waves and birds singing. At the same time you are steering the sailing ship and fighting with two elements: water and air. A speedboat can glide in Minsk Sea for half an hour. You can ask me what’s interesting in steering a yacht. I steer the motorboat, launch, jet skis, but for me the driving yacht is still the most interesting thin, because it’s a pleasure to control the sail. Once there was strong wind on the sail and it pressed it down. The yacht was at so high-inclination that we could not move, but it didn’t overturn. We took down the sails, turned on the motor, and went to the port without the roll. “

Pavel let me steer the boat. There isn’t anything difficult to turn the wheel, it’s just like a carwheel. But nearby there was a boat with fishermen and it was a little bit scary because the yacht went in their directiontwice and I had to turn the wheel to avoid a yacht.

How much does it cost to keep the yacht?

Jedai costs $ 50,000 with customs clearance. To keep a sailing yacht in the season costs 1.000.000 BYR per month: for parking at the wharf and usually it uses 40 liters of petrol a week. The petrol consumption of the yacht is five liters an hour. But if you consider that there is almost always wind and the motor is used only to land at the pier and to push off, the petrol consumption is minimal. The charges also include the service of the motor once a season, it takes 2.000.000 BYR. Every two years you have to change the schoot (ropes  controlling sails) –  on the average it costs 30 cents per meter. And there are some things that you have to buy too: rollers and detergent. So per month it is about 500.000 BYR. The price is not a problem, the thing is that you have to bring from them from Poland. The most expensive thing is to sew the sails if they get torn. It costs 2.000.000 BYR at least, depending on the size of the sail and how much it’s torn.

So, to keep a sailing yacht takes you at least 5.000.000 BYR monthly. Twice a year is necessary to crane down a yacht into the water in spring and crane down in winter. To raise a Jedai coasts 500.000 BYR. In winter, the price of parking is the same, if it is outdoors in a yacht club, not in a hangar or a garage. Ideally, you have to buy a special film if you really want to take care of the yacht.

Does it sounds good go sailing in Minsk Sea?

According to my source, it’s not necessary to have the sea where you live to sail the yacht. For this reason it’s enough to have a lake even smaller than the Minsk Sea. The Polish, for example, do yachting on Mazury lakes, these are three big lakes, connected by channels. This yachting area has the good infrastructure, for example many berths and cafes for every taste.
“Minsk Sea is an interesting place for yachting. But it’s more difficult to sail here than in other seas because the shoreline is close, moreover wind direction constantly changes. The best time to walk on the yacht is after six o’clock in the evening. From eight o’clock wind starts to subside, of course, if a thunderstorm is not forecast. On the other hand, when there is no wind, you have to turn on the motor and it is makes a lot of noise. Sunset looks beautifulwhen youre iut sailing, especially when there are no clouds in the sky “– says Paul.

Distances routes for Jedai are always different, it depends on wind and the hours when people hire the yacht. “The main routes go from the sanatorium ” Unost” in the direction of the village Laporovichi or go down to the dam and sail along the yacht clubs,” – says Pavel. During the season, the average hiring is four times a day. The biggest drawback of yachting is its seasonality. The season begins in late April or early May and ends in late in October.

“You can hire a yacht for five hours or for one hour but a lot of times. Of course most people rent a yacht for an hour, but it is not enough for the yacht, “- says Pavel. Sometimes a company rents a yacht for a corporative party. It can be hired for several workers or even for one who has good work superiors and the company gives him the certificate. And sometimes, companies organize corporative regattas for employees, the biggest regatta included sixteen yachts. Every yacht has an experienced skipper. “Once people came to rent a yacht and they liked it so much that they came to school to learn how to sail. That way people can learn more about yachting, “- says Pavel.

First of all during the short season the yacht doesn’t pay off in a few months. “In fact, if you buy a yacht for yourself and rent it out, it makes sense. That why, we try to promote and develop yachting instead of doing business. Now we have eight professional sailors and this is not enough. By the way, among us there is one girl. But for a large-scale regatta sailing there are not enough ships. At the same time, three years ago we didn’t have what we have now. There are large sailing yachts such as Jedai and this is very interesting“- says Pavel. 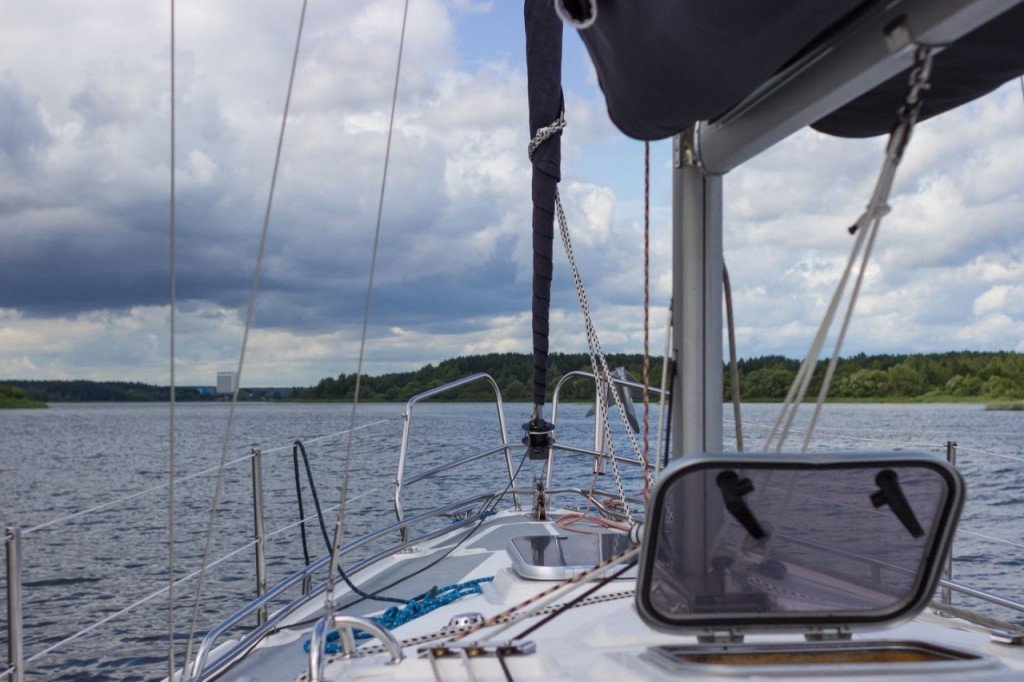 Who travels on the yachts and who buys them?

Different people travel on yachts: from the higher to middle class. To rent a Jedai for one hour costs 1.200.000 BYR. For example, for six people it will be 200,000 BYR for each one, it’s not that much. Usually, couples rent a yacht for a night. Sometimes the students come, middle-aged people, pensioners, families with children, even quite small. Russians mainly enjoy Minsk Sea and Belarusian nature. They say if they had an area like this there would have been a lot of private houses there. Foreigners, who come from countries where there is a sea, are surprised that this is an artificial reservoir, but are happy to sail in Minsk Sea.

“Our people have been shown how rich people live  on their large cool yacht. But it’s not yachting actually. The yachts were originally ships for rest. Then the construction of huge yachts started, and people who are not familiar with that know only Abramovichs acht. In Belarus, yachts are bought by those who love them and who have money. In general, people over forty.”

Pavel said that it will be great to have more places to moor and to relax. “If we are sailing in the yacht, we can visit only one of the two yacht clubs, or moor at the sanatorium” Unost “. But there’s nothing to do at all. On the beach “Bulbash” you can sunbathe or go to a cafe. But almost all who come from a yacht club go to “Robinson”, to have dinner at the restaurant in the evening “– says Pavel.

The point is, the sailing can be extreme if the wind is strong. There are people who want more wind. In general, those who have already sailed, and who like it when a boat goes fast in the rolls. Most prefer calm winds, because people come just to relax in the sun.

Where and how to get licenses for yachts?

Ten hours of sailing practice on a yacht will be enough to go sailing alone. The licenses are only given by the state inspectorate to small vessels, they teach the theory of marine navigation and motor control without practicing. A yacht has a motor, so Pavel Nedvetsky said that at first you have to learn how to drive a yacht and park it. To learn how to put the sails you need just five sessions of two hours. Then you can get a licence to manage a yacht up to twelve meters long and capacity for twelve. If you want more, you have to stand a Merchant Navy exam. “I finished the commanders school . I have a captain’s diploma. In addition, in Minsk Sea, there are two yachting schools for children. In Minsk yachting is developing compared to regions where it does not exist.”

It is important that you don’t need to have special physical shape for sailing, the most important is to have a sleight of hand. “Handling the rope is not so easy, but girls can manage too. If you do everything the right way you don’t need a lot of physical strenght”, – says Pavel.

If  Minsk Sea is not enough for sailing – where to go?

“I sailed in Naroch. – Pavel says – to be honest,  Minsk Sea is better than Naroch because of the stone shoals. If you can’t sail well, it is possible to break through the bottom of the yacht. But lake is much bigger and the water is clear, not green like here.”

In Russia, yachting is not so developed. If you want to sail you can go to Turkey, and you don’t need a visa. Yachting is very popular at the Canary Islands, in Montenegro, in Croatia, but it is very expensive. You can go to Majorca or to Malta, but the cheapest option will be Greece, where you can hire a yacht. But there is one thing: to keep a yacht overseas will be expensive. 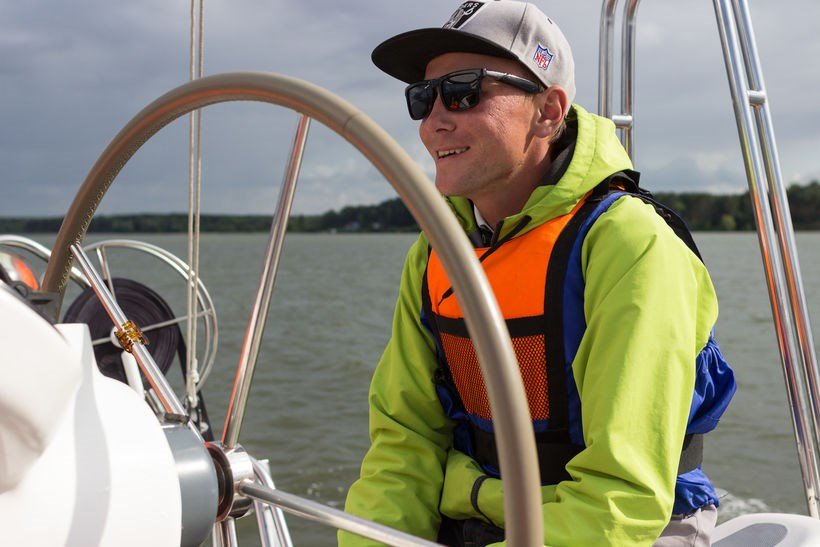 Text and photo by Alisa Petrova of Kyky.org