Peter Spuhler hasn’t concealed that the Belarusian mill is having hard times right now. The main Russian market has contracted. “It has occured due to another decrease in oil and gas prices, depreciation of the ruble and the sanctions imposed on Russia. We are looking for new markets — the USA, the UK and, Australia. We would also like to develop new segments such as high-speed trains, underground trains and locomotives. The economies of the CIS countries will hopefully recover and the deferred demand which is now being accumulated on the CIS markets will result in new orders”, — noted Peter Spuhler.

Recently the Stadler plant in Fanipol had been working on a major order for production of 25 trains for the Russian company “Aeroexpress” performing intermodal and suburban transportation. The trains were supposed to ply routes linking three Moscow railway stations with the city center. But the crisis broke their plans. “The customer didn’t manage to pay for the order because after the depreciation of the Russian ruble the products became twice more expensive. After negotiations with the banks and insurer of “Aeroexpress” the company will receive 11 trains while the terms of payment will be doubled”, — Peter Spuhler told, adding that Azerbaijan is going to buy 5 trains with a prospect of purchasing five more in the future. Another three trains will be sold to different customers from the CIS. Only one train won’t be produced. “We have resolved the issue and avoided material losses”, — stated Peter Spuhler.

In 2015 we produced sixteen two-storied electric city trains KISS, now six electric trains and two seven-car trains “Intercity” are being made for the Belarusian market. 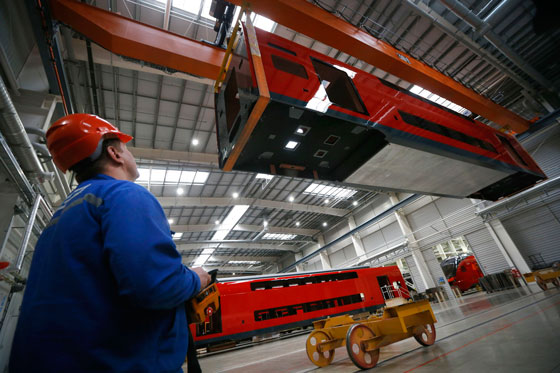 At the present time six hundred people work on the plant, but the capacity allows up to a thousand. The enterprise is designed for 900 thousand working hours per year, but the current loading is 30-40%. Not a single employee was sacked — the workers were sent to Stadler mills in Poland, Hungary and Switzerland. The social package wasn’t reduced as well, even extended: despite the fact that the costs of food for factory workers has increased, the meal price remains the same.

Peter Spuhler plans to use the available production facilities at 100% capacity by intensifying sales on the CIS market and redirecting some projects from other plants of the group to the Fanipol mill. For this purpose they intend to invest an additional 4-5 million euros into the equipment of the mill.

According to Peter Spuhler they will be performing machining of aluminum profiles. As a result the Belarusian plant will be able to produce trams not only for the CIS region but also for Central Europe.

The Belarusian railway also decreased the purchase of trains due to a complicated financial state. This year the plant will supply the railway with two seven-car trains “Intercity” to ply the route from Minsk to Gomel. One of the trains is undergoing certification currently . Peter Spuhler hopes that the Minsk Metro will become one of the Stadler buyers in the future.

“The developments made us split from each other. No negative emotions took place, it’s just the current economic situation that separated us. Right now it’s reasonable for each enterprise to work autonomously. The Belarusian government shared our desire. We have a close partnership with “Belkommunmash”, we support our colleagues in terms of market development. In addition “Belkommunmash” acts as a subcontractor for the production in Fanipol”, — explained Peter Spuhler.

The Stadler owner has repeatedly emphasized the high performance level of Belarusian workers, allowing them to master Swiss technologies in a short period of time terms. Peter Spuhler reckons that Belarusian companies can handle orders of Western firms and “if these firms show readiness to make investments, the results will not take much time to be realised ”.
“The expected lifting of the EU sanctions will make Belarus more attractive as a production site. The Belarusian economy has every chance to be attractive for investment” — Peter Spuhler is convinced.

Reference
The Swiss Stadlet Rail Group has a sales turnover of 2.2 billion Swiss francs, it employs around 7 thousand workers. The Stadler Company has more than a 75-year-old history. The company headquartered in Bussnang (Eastern Switzerland) offers system solutions in the field of railway transportation. It has got numerous branch offices located in Switzerland, Germany, Spain, Poland, Hungary, the Czech Republic, Italy, the Netherlands, Austria, Belarus, Algeria, Australia and the USA. The product range of the company includes light rail, underground trains, diesel and electric multiple-unit trains, among them high-speed trains, locomotives and train cars. The best-selling product to date is the rolling stock FLIRT; the company supplied 17 countries including Belarus with 1200 stocks. Swiss and Belarusian constructors jointly developed the tram “Metelitsa”, used in Moscow and Samara.