Swiss company to build trains for Belarus and Russia

Swiss company Stadler Rail Group has built the factory for production the whole range of modern electric trains and electric transport. The factory is the first of its kind in the post-Soviet countries. Although, Belarusian authorities left some responsibilities for the “progenitor” of the project – “Belkomunnmash”.

Leading European manufacturer of electric trains entered the Belarusian market as a supplier of electric trains, and after that ventured to build the plant near Minsk from scratch. The company Stadler Bussnang AG in 2010 won the tender to supply Belarusian with 10 modern trains. In 2012 company created a joint venture, “Stadler Minsk” to construct a new plant for producing modern trains.

The company is located in the industrial zone of Fanipol – 4 km from Minsk. Company invested 50 mln Euro into the plant. 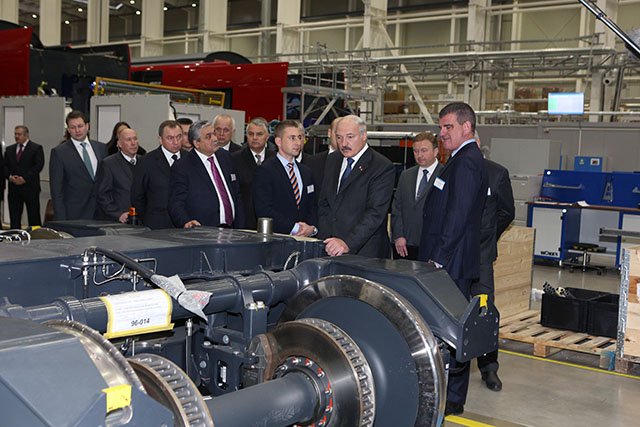 From the supplier to the manufacturer.

At the opening ceremony of  “Stadler Minsk” on 20 November, Alexander  Lukashenko noticed that he was the originator of its creation. And not just because he “enjoys these beautiful machines”.  “But mostly because we received a high-tech manufacturing. The company, which already has market outlets came to find new ones”, – said Belarusian president.

Stadler company explaining the decision of opening the plant in Belarus noted the qualified human resources, the ability to work in a single economic area with counties from Eurasian Economic Union and good logistics – the neighborhood countries also use wide rail gauge.

The construction of a modern plant in Belarus took 2 years.

At the initial stage, the partner of Stadler was “Belkommunmash Holding Management Company”- a company founded by the Minsk Council. Joint venture “Electric transport” was created for the project, which was later renamed to “Stadler Minsk”. Stadler owned 60% of the company, while “Belkommunmash” had 40%.

According to the “Belorusy i rynok”, in spring of 2014 Stadler bought Belarusian stake for about 10 million USD and thus became the 100 percent owner of the plant. The money, according to Presidential Decree number 122, was directed on the development of  “Belkommunmash”.

Construction of the plant in Fanipol began in April 2013. The area of 18.9 hectares was assigned to use in the Minsk region, it was included to the Free Economic Zone “Minsk”. The first launching assembly was completed in December of last year.

The maximum capacity of the new plant – 120 railcars per year. About 700 new jobs have already been created and the staff will increase up to 1,000 people a year later. Factory functions include aluminum welding and painting railcars cars, as well as their final assembly and commissioning. In addition, “Stadler Minsk” is now engaged in the design and production of trolleybuses and trams – Stadler took over this business from “Belkommunmash”.

The first order to be executed at the new plant – double-decker trains for the Russian company “Aeroexpress” (connection with Moscow airports). In May 2013 Stadler Rail Group has won the tender for the supply of 25 double-decker trains model KISS . Value of the contract (118 railcars) is 685 million EUR.

According to the contract, Stadler will deliver the first Russian trains from the Swiss assembly, the rest – 21 trains – will be assembled at the Stadler’s factory in Belarus. The contract must be made before 2016. 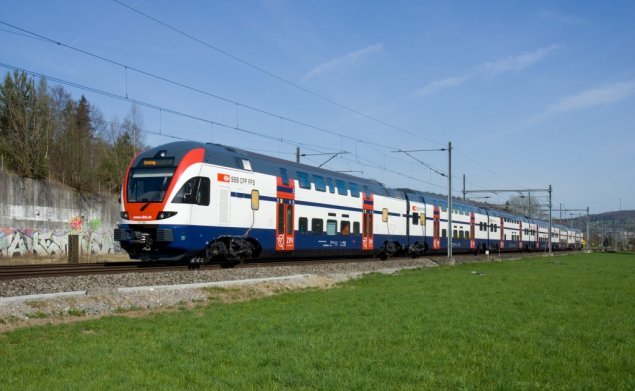 Objective: “not to remain on the margins.”

Lukashenko called Fanipol as “the center for international engineering” right after the launch of the Stadler’s plant . He added that “we do not intend and we won’t build a secondary level factories in Belarus, but we want create conditions that give preference only to world class plants, which create highly competitive products”.

“He (Peter Shpuler, ” Stadler Rail Group” CEO) struck the wide road, which other businessmen can go by”, – said Alexander Lukashenko.

However, festive background was marred by serious circumstance. On the one hand, the country has a new modern plant for the production of electric trains – that’s good. On the other hand, what will happen to “Belkommunmash”, which until recently was engaged in the production of trams and trolleybuses?

Professionals involved in the project, in an interview noted that “Belkommunmash” can not produce trolleybuses and trams anymore, because the manufacturing is now transferred to a new plant. “But in the investment agreement, a number of other treaties for this project say that” Belkommunmash “must not die” – he explained.

Shpuler assured that the company will find the solutions for development of “Belkommunmash”.

“Yesterday and today we discussed these issues and we are able to develop a vision and proposals for the integration of the companies. For the last two years we have established a very trusting relationship, and I’m sure we can find a solution that will satisfy all parties,” – said the head of the company Stadler . He added that the company expects to receive an order for the production of Belarusian subway cars – “it would be an important sign for the plant”.

CIS Chief Sales Officer of Stadler Matthias Stehr told the media that the concept of further development of “Belkommunmash” is actually discussed, but there are already three directions. “First, cooperation is possible in the manufacture of components (hulls, joints, etc.). Second, we can help” Belkommunmash ” to develop municipal engineering. Third: it is possible to find other areas of production and other products that can be made at “Belkommunmash” factories”,- said Matthias Stehr.