Alexander Lukashenko took the oath of office for the first time as the first, and so far only, President of the post-Soviet Republic of Belarus on July 20, 1994.

He had handily defeated five other candidates in the first round of voting, including pro-Russian Prime Minister Vyacheslau Kebich, co-founder of the Belarusian Popular Front Zianon Pazniak, resigned Chairman of the Supreme Soviet Stanislau Shushkevich, Secretary of the Party of Belarusian Communists Vasil Novikau, and Chairman of the Agrarian Party Alaksandar Dubko. However, with only 44.82 percent backing him, he hadn’t achieved the minimum 50 percent margin of votes , and had to compete in the second round against Kebich, an engineer-turned-politician who took second place with 17.33 percent of the electorate. Lukashenko trounced his challenger in that round by a margin of 80-20, finally becoming the Republic’s only President.

The rules for election of Belarusian presidents were laid out on June 14, 1994, and published in the Narodnaya Gazeta in an article entitled, “Taking the people from the abyss.” 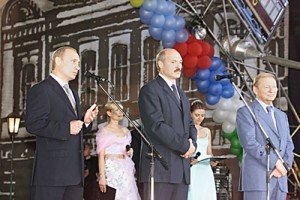 Lukashenko at the 2001 Slavianski Bazaar with then presidents Vladimir Putin of Russia (left) and Leonid Kuchma of Ukraine (right). Photo via the Russian President Press and Information Office (Wikimedia Commons)

In his subsequent campaign, Lukashenko promised everything: to stabilize prices in a period of hyperinflation, increase the independence of the National Bank, reduce the cost of upkeep for the heavily bureaucratic government, institute greater controls on state-owned enterprises, and set limits on the powers of local and national authorities in the field of economic management. Lukashenko also promised to avoid sharply stratifying Belarusian society through progressive taxation, manage the contribution of labor against an objective index of the population, provide guarantees of benefits for vulnerable segments of society, and introduce a system of government grants and concession lending for private housing. Every citizen of the Republic of Belarus was promised “a real opportunity to think and speak in the language in which he or she was brought up.”

Lukashenko, in his election campaign, also promised to “restore the ineptly destroyed relations” the country was said to have had before the break-up of the Soviet Union with the other Soviet states, especially Russia and Ukraine (then also in an election between western Ukrainian Leonid Kravchuk and eastern Ukrainian Leonid Kuchma), and raise the international prestige of the country by maintaining its reputation as a reliable and profitable partner.

“People of Belarus, I cannot promise you rivers of milk and shores of honey,” he said. “I’m not going to lie. We all have to pay for what we have so long suffered, from the untenable policy of a long-bankrupt government. We have a great deal of hard work, for which no one but you and I will keep the state and the people from the abyss. To lead in that task is the primary task of the president.”

Staying power for staying in power

Since then, Lukashenko has been re-elected president of Belarus three times (in 2001, 2006, and in December 2010), and according to official figures, he has invariably obtained an absolute majority in each election. Thus, according to the CEC, Lukashenko won with 75.65 percent of the vote in 2001, 83 percent of the vote in 2006, and 79.65 percent in 2010. None of these election campaigns were recognized by OSCE observers as meeting democratic standards. 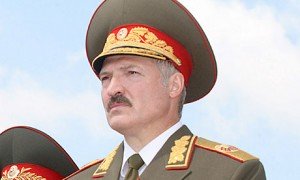 Belarusian President Alexander Lukashenko in the uniform of the Commander in Chief of the Belarusian Armed Forces. Photo via the Russian Presidential Press and Information Office (Wikimedia Commons)

During Lukashenko’s presidency, the constitution was changed three times in national referendums. On April 11, 1995, Lukashenko held a vote of the people by which, beyond changing the national flag and coat of arms (following a heavy campaign that identified these as symbols used by Nazi collaborators during Germany’s World War II occupation), he also raised Russian to the status of being a state language equal to that of Belarusian (much as Ukraine had under Kuchma). He also secured a mandate for greater economic integration with Boris Yeltsin’s Russia, and allowed the president to terminate the plenary powers of the Supreme Soviet, the Belarusian national legislature, in “cases of systematic or gross violation of the Constitution.”

More than a year later, on Nov. 24, 1996, Lukashenko held another referendum. Beyond changing the country’s Independence Day to July 3 in order to commemorate the liberation of Belarus by the Red Army from the Nazis during World War II, the Basic Law was amended. In addition to resetting Lukashenko’s term of office to a five year period, starting on the date of the Referendum, the President was given the power to issue edicts and decrees that exceeded in legal force the acts of the newly designated National Assembly, a new bi-cameral body that replaced the Supreme Soviet. He also obtained near total control over the national budget, and was given the power to appoint six judges of the Constitutional Court and select members of the Central Commission for Elections and National Referendums.

The last time that the Constitution was changed was by referendum on Oct. 17, 2004, during which the provision was dropped that limited the president to two terms in office. The opposition, which resisted at each turn, saw all these changes to the basic law as having only one goal – to consolidate Lukashenko position as the country’s only, and uncontestable, political power.

Shushkevich’s comments on 20 years of Lukashenko 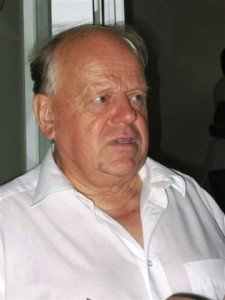 Stanislau Shushkevich, still around after all these years. Photo by Mariusz Kubik via Wikimedia Commons

BelaPAN attempted to contact the main contenders against Lukashenko in the 1994 race to the presidency in order to share their memories of the country’s first presidential campaign. The only one who agreed to answer questions was Sushkevich, who now leads the Belarusian Social Democratic Assembly. Dubko, of course, passed away in 2001, and was honored with the posthumous award of Hero of Belarus for “valiant service to state and society.” Kebich agreed only to pass along his compliments to Lukashenko on the 20th anniversary of his tenure as President of Belarus. Pazniak, who remains leader of the Conservative Christian Party of the Belarusian People’s Front while in exile in the United States and is a continued staunch opponent of Lukashenko, only passed along that he wasn’t interested in discussing this topic.

“When it all started, I did not think (Lukashenko) could win,” said Shushkevich, who signed the Belavezhskaya Accords breaking up the Soviet Union on behalf of Belarus. “I thought that promising everything to everyone really required a blatantly ignorant electorate to work, and it would not be perceived warmly. Neither Kebich, nor myself, nor the many others who ran promised all that Lukashenko promised. And he had the audacity to promise! But it turned out I was wrong. From the standpoint of victory, his was a very appropriate strategy.”

After the election, Shushkevich, who before politics was a distinguished scientist that had the dubious distinction of being assigned to teach American defector and future alleged presidential assassin Lee Harvey Oswald Russian while he was in Minsk, did not expect Lukashenko to last 20 years, as he has. “I figured I understood how the political system worked. I had not realized that for the voters, he was the perfect candidate. I did not think he would have such a long stretch,” said the former Chairman of the Supreme Soviet.

Asked whether he regretted anything from the campaign, he said, “The only mistake that I’ll admit is that I saw the people as better than they actually were.”

According to Shushkevich, the length of time that Lukashenko will stay in power depends completely on the leadership of Russia. “He’s doing everything that the Kremlin asks,” he said. “He has a career for as long as the current government of Russia remains in the Kremlin.”

Shushkevich, who played a prominent role in the creation of the Commonwealth of Independent States, was a staunch opponent of the presidential form of government during his time as the head of Belarus in the years immediately following the break-up of the Soviet Union. “The personality of the head of state played a very decent role,” he recalled. “And if we talk about how to return Belarus to the path of building a normal society – with the rule of law, a market economy, and free press – it seems to me that an enlightened president here would be very good. But if we consider what happens if, as will probably be the case, we fail to receive such a gift, we should not discount the probability that an uneducated person will become head of state. I am not a supporter of a definitive parliamentary form of government, but I think in the case of Belarus, it would be better.”

Shushkevich, who was discredited by Lukashenko in 1993 on misappropriation charges that were never proven, said that the main problem of the country lies in the fact that Belarus “has not changed over the long run the mentality of its people. People do not tend to follow the ideals that the Leninist would call ‘bourgeois-democratic.’ To build a democracy with a people who do not seek democracy is quite difficult. We have promoted an anti-democratic, anti-Belarusian approach to governing ourselves. It is difficult to say how to get out of this situation.”

Translated from article by Artem Schreibman