The impact on Russian-Ukrainian relations of Tuesday’s tripartite talks between representatives of the European Union, the Eurasian Customs Union, and Ukraine is still difficult to predict.

In Russia, Minsk has been recognized and congratulated for what the online publication Gazeta.ru described as “literally a Herculean effort” to bring this important event to Belarus. President Lukashenko himself made numerous telephone calls with his Ukrainian, Kazakh, and Russian counterparts to set up this special opportunity for peace. It’s not been without an ulterior motive, though.

“If the meeting is held, and it turns out more or less successfully, Lukashenko will acquire the status of ‘peacemaker,’ and he will significantly improve his relations with Europe, getting rid of his old image as a ‘European social outcast,’” read Gazeta.ru. “If this meeting succeeds, Minsk will also become a unique ‘negotiation platform,’ a communication bridge between Russia, the EU, and Ukraine.”

However, this may be an overly optimistic forecast of the results of the Minsk summit, as there exist serious challenges to the success of the meeting.

Pro-Russian militants form up for the Donetsk Victory Day parade in May. Their continued existence in the face of Ukraine’s Counter-Terror Operation has been ascribed to Russian support in both men and arms. Photo by Andrew Butko via Wikimedia Commons

The war in the Donbass is not conducive to serious negotiations

Even hours before the summit, the difference between the parties over even the agenda of the meeting may be enough to thwart it taking place.

Last Thursday, Aug. 21, Poroshenko, in the run-up to Ukrainian Flag Day and its Day of Independence, told the media that he was going to Minsk to “make peace,” and to urge Russia to “take away its militants.” On Saturday, he received public support from German Chancellor Angela Merkel during her visit to Kyiv, when she said that peace would only be possible if Ukraine was granted control of its own borders. At the moment, up to 200 kilometers of mostly Luhansk regional international frontier are effectively in the hands of pro-Russian irregular forces.

Russian Foreign Minister Sergei Lavrov, at a Monday press conference, said that the Kremlin is ready for any interaction that will lead to a resumption of negotiations. “We call for the use of all formats available in the interest of the Ukrainian people, to stop the war, to not stir up further conflict, and to not drive Ukraine into a deeper (civil war),” said Lavrov, suggesting in tone that the blame for these problems somehow solely rests on Kyiv.

The balance of Lavrov’s statements on Monday indicated, in case there was any doubt, that Putin is not likely to abandon his main objective in Ukraine, to ensure at any price that the country remains in the Russian orbit.

Lukashenko, meanwhile, described his intentions in setting up the Minsk summit to provide a forum in which to discuss the signing of Ukraine’s Association Agreement with the EU. He suggested that negotiations will be needed to ensure that “products from the EU do not pass with zero duty applied through Ukraine on their way to Belarus, Russia, and Kazakhstan, effectively strangling our economies.” Lukashenko also wanted to see discussed questions “in connection with the introduction of Russia’s embargo on the supply of certain goods” from the EU.

According to ITAR-TASS, Putin’s press secretary Dmitry Peskov indicated that Russia is likewise open to discussion of various subjects, including the distribution of humanitarian aid to areas affected by the crisis, the situation of Donbass refugees, and, in tandem with Lukashenko’s intentions for the summit, economic issues.  “The leaders can discuss bilateral relations between Russia and Ukraine in light of Kyiv signing its Association Agreement with the EU,” Peskov suggested. “On this subject, we expect there to be applied a large amount of effort.”

However, for all the unconditional importance in the current situation that the economic issues between the EU and the Eurasian Customs Union might hold, these will likely not be considered unless there is some resolution on one fundamental issue – the termination of support by Moscow for separatist belligerents in eastern Ukraine. This cold fact, and the lack of any reasonable expectation that Russia will change its strategy for the sake of the success of the Minsk summit, suggests that the talks may prove to be rather limited in achievements, and indeed further discussion may end up being postponed indefinitely. 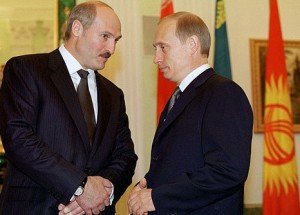 Of course, President Lukashenko is not going to be the only leader that EU officials will see at the Minsk summit. Photo by the Presidential Press and Information Office via Wikimedia Commons

Meanwhile, even if the talks manage to produce substantial results on Aug. 26, there is no guarantee that there will be a serious improvement in Belorussian-European relations. This is especially so in light of the fact that it is not at all clear what the Europeans intend to bring to the table in the Minsk summit. It isn’t even clear who originally asked them to take part. Although President Jose Manuel Barroso of the European Commission said he received the invitation for EU representatives to come to the summit from the Kremlin, many others suggest otherwise. The press service of Kazakh President Nazarbayev took credit in a telephone conversation on Aug. 19, when it said, “European Commission President Barroso supports the offer of Kazakhstan to meet on Aug. 26 in Minsk between the Customs Union, Ukraine, and the European Union.”

However, most publicly available sources indicate that the credit for the EU participating at all in the summit rests in large part on the insistence of Kyiv.

Still, no matter who issued the invitation, it is impossible to deny that tomorrow’s visit to Belarus by three senior officials of the EU will be a significant event. European officials at this level have not been seen in Minsk in almost four years. The last senior visitor from the EU came here in November 2010, when Czech diplomat Stefan Fule, European Commissioner for Enlargement and European Neighborhood Policy, arrived to consult with Lukashenko’s government before Belorussian elections that December.

And lest it be forgotten, Belarus’ president is not the only senior participant to the summit, and though the opportunity exists, it is unlikely that guests will come to Minsk to engage in any substantive bilateral talks with Lukashenko. Of course, “courtesy meetings” are not beyond the realm of possibility.

The Belorussian authorities, meanwhile, as hosts of the summit, appear destined to play a significant role in Tuesday’s negotiations. Of course, as a member of both the Eurasian Economic Union and the three-party Customs Union, officially Minsk will be obliged to follow strictly the party line set by Moscow. If Lukashenko set his own course in the talks, Russia might “suddenly remember” hitherto unknown charges levied by RosSelkhozNadzor that Belarus failed to control the movement of agricultural products forbidden in Russia within its territory. In light of this imposed and inflexible solidarity, it’s hard to imagine the motivation for Brussels to make any sort of effort to engage in a new diplomatic approach to the government in Minsk.

So, seriously counting on radical improvements in the interaction between Europe and Belarus as a result of this summit is perhaps a bit optimistic. Certainly the conference will open some doors, but for the successful implementation of opportunities that would be welcomed by the Belorussian regime, more decisive steps would need to be taken, such as the hitherto impossible European demand of the release of individuals they describe as political prisoners.

According to TUT.by, areas of Minsk will be restricted after 10:30 a.m. for travel by both private vehicles and surface public transportation to ensure the safety of participants at the tripartite summit. Traffic will be temporarily suspended on the MKAD ring motorway near the intersection of Praspekt Pyeramozhtsau (Pobeditelov) in the northwest of the city, and along that artery and Praspekt Nyezalyezhnastsi (Nezavisimosti), the main road through the city center, according to traffic police spokesperson Tatiana Harlinskaya. The State Automobile Inspectorate recommends that commuters, both in private vehicles and in public transit, take this into consideration when considering their routes and schedules on Tuesday.

Russian stories contributed by Andrey Federov of Naviny, and Artem Filipenok of RBK