On Friday, July 18, Belarusian President Alexander Lukashenko signed Decree No. 357 “On the Realization of an Investment Project to Build a Multifunctional Complex in Minsk,” which authorized investment for the construction of a national football (soccer) stadium on a parcel of land bounded by Partyzanski Praspiekt, Vanyeyeva Street (Second Ring Road), and Dawhabrodskaya Street, in southeastern Minsk. The stadium is anticipated to meet the standards set for a Category 4 UEFA (Union of European Football Associations) regulation field with a capacity of 33,000-35,000 seats.

In effect, the project envisions replacing the existing Traktar Stadium, the second largest multi-purpose venue in the country, along with the “Ring of Fame” complex, with a new national stadium that will feature an attached shopping complex, according to the press service of the president. The Triple (“Traipl”) project management company, tasked with the construction, will be the main beneficiary of the investment scheme. 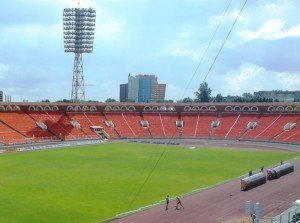 The new stadium, which will replace the Soviet-era venue that hosted second league team Partizan Minsk, was featured in the application of the Football Federation of Belarus (Belaruskaya Federatsiya Futbola, or BFF) in its bid to host the European Championships in Minsk in 2020. Sergey Safaryan, first deputy of the federation, originally felt that Belarus’ chances were better if they hosted the finals in the 40,000-seat Dynama Stadium, situated in the city center. However, the Ministry of Sports and Tourism has already designated this venue to be an athletics-oriented facility, as opposed to one dedicated mainly to football, and this decision rendered “an unkind service” to the proposal to host Euro 2020 in that stadium. As a result, this new venue was proposed.

“We hope that the acceleration of work on constructing a new national football stadium will make our application satisfactory for consideration,” said Safaryan.

Safaryan lamented the cost of the construction of new football venues. In each of Belarus’ six oblasts, new structures have been planned, the most expensive of which was Barysaw Arena in northeastern Minsk Voblast, home of Belarus Premier League champions BATE Barysaw. The team holds the distinction of being the only Belarusian team to have qualified for the group stage of the UEFA Champions League (in 2008-2009, and again in 2011-2012, and 2012-2013).

“But they are necessary for our economic climate,” said Safaryan. “With their erection, we significantly reduce the need to pay expensive fees to send our teams abroad, and we are able to host competitions within our own borders.” 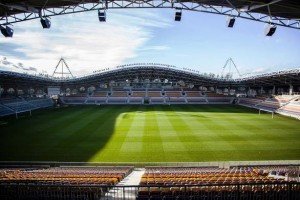 Barysaw Arena opened for use by the BATE football club in the spring. Photo by Davidsousa1 via Wikimedia Commons

He also noted that technological standards for sports facilities seem to improve faster than the skills of Belarus’ star athletes. Belarus has been slow to catch up, and Safaryan has lobbied for the development of a new Belarusian standardized field that could be set in place wherever needed, rather than signature fields, with design fees dropping from eight to ten-fold. Such innovations are still under discussion.

The final decision on the selection of the Euro 2020 site from the 13 applicant cities will be made by the Executive Committee of the UEFA in Geneva, Switzerland, on Sept. 19. Competitors range from Bulgaria’s Ovcha Kupel Stadium in Sofia, which plans to expand to 24,000 seats, to London’s Wembley Stadium, a 90,000-seat arena.

Translated from reports on Sport.TUT.By