Belarusian President Alexander Lukashenko expressed his belief on Friday that a proposed program to develop rural tourism in Belarus will help revive economically challenged villages all across the country.

“We have a lot of villages,” the president noted. “Previously these were called ‘unpromising.’ And farms – why wouldn’t a successful businessman who grew up there want to build an agro-farmstead? This sort of business can resuscitate a village.”

In the president’s vision, the locals would help look after the estates and keep order. “I push people to the fact they should just go and develop it,” he said. “Some already have.” 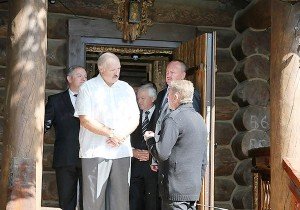 President Alexander Lukashenko visited a rural tourism cluster in the Valozhyn District on Friday. He declared his belief that agro-ecotourism could help preserve the financial independence of the country. Photo via president.gov.by

The president believes that historical manors could gradually be shaped into modern farm complexes. “Suppose one bred ponies, and maybe kept a dozen cows,” he said. “I want to revive our villages into agro-towns. If we build it well, these could become future cities. But these farming villages need to raise as much as possible.”

President Lukashenko said that some businesses have supported his proposal and businessmen have begun even to invest in places from whence they were born. He also noted that Belarus is ideal as a transit country, and that many of these villages could provide roadside services, where facilities need not be constructed from scratch. He also suggested building bicycle routes between towns. All this would provide an impetus to develop small settlements.

“We do not need to select an open field along a road to build services,” he said. “In every direction you go, we have district centers spaced 35-50 kilometers apart from each other, and these could be tied to regional infrastructure in terms of rest, maintenance, and refueling. What is 35 kilometers? Often it is the case that they need not be busy places (to be successful). If we improve even just our district centers, people are going to build along the roadside.”

In 2006, Belarus adopted a decree to create an effective environment for developing rural tourism, allowing local residents to earn extra income and contribute to the creation of new jobs, reviving Belarusian villages as a whole. Under this decree, activities in the field of rural tourism are excluded from being categorized as entrepreneurial, and as such are exempt from applicable taxes. They do have to pay a once-a-year fee, though, in lieu of a tax, based on the value of the activity.

Over the past six years, the number of farmsteads have grown ten-fold, rising from 188 in 2007 to 1,881 in 2013. Under local authorities, 22 agro-clusters have emerged across Belarus, bringing together owners of estate lands, contractors, farmers, and other service providers. 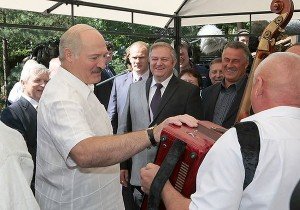 Valozhynskiye Gastsintsy offers festivals throughout the summer, as well as more static attractions as museums and a plethora of outdoor activities. President Lukashenko familiarized himself with the offerings in the Valozhyn District on Friday. Photo via president.gov.by

On Friday, President Lukashenko reviewed one of the more successful rural tourism clusters, “Valozhynskiye Gastsintsy”. Begun in 2008, the cluster organizers gathered farmstead owners, artisans, animators, musicians, tourism specialists, and local officials to develop a rural green route that allows travelers to visit farmsteads throughout the Valozhyn District, a fertile flax-growing area about 75 kilometers (50 miles) northwest of Minsk. Prior to the formation of the tourism cluster, the area had been best known for producing the “best syrok (bite-sized chocolate-covered cheesecake bars) in the world.”

Parallel to the green route runs a 150-kilometer bike path that passes eco-museums and historical manors, as well as other natural and historical attractions. A series of festivals attract city-dwellers to the district, and along with biking, the region offers visitors the chance to canoe, hike, camp, ride horses, and, in the winter, cross-country ski. The organizers promise soon to offer ultralight aircraft tours.

Developers of rural tourism, such as those involved with Valozhynskiye Gastsintsy, have been granted concessional lending through Belagroprombank, a specialist bank designed after independence originally to supply financial credit to agriculture. Since the beginning of the program, the bank has provided 471 loans to agro-ecotourism projects totally 30 billion BYR (3 million USD). The residual credit debt as of July 1 was 16.5 billion BYR (1.65 million USD), including a paltry 24 million BYR (2,400 USD) in overdue loans. The relative timeliness of debt repayments provided by the lender projects is regarded as an indicator of the success of the program.

“Most importantly for us is that these enterprises are formed by owners of the whole business,” President Lukashenko said. “This is not something that someone has collected and shared. This is private property, with people using their own hands to create all this. These are good things that people have built, and the more of them there are the stronger will be the independence of our country.”

During Friday’s tour of rural tourism businesses, the president visited farmsteads, learned about the recreational facilities on offer, and developed a strong sense of appreciation for those who have taken part in the program. “For this I have to thank you,” he said. “You are saving Belarus. Without this sort of project, the country simply will not exist.”

Lastly, the president forecasted that the demand for rural tourism will increase year after year. “Everyone wants peace from all the tiring hubbub of fuss (in the city),” he said. “Belarus’ countryside, it turns out, is a quiet place.”