Tuesday, Sept. 16, proved to be a landmark date for Belarusian higher education as two of the country’s universities received rankings from the prestigious QS World University Rankings. 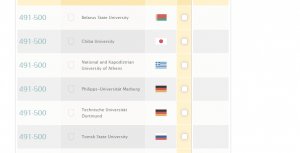 Belarus State University (BSU), for the first time in the rankings’ history, obtained placement within the Top 500 universities of the world by Quacquarelli Symonds (QS), a prestigious British firm specializing in publishing guides and providing consultation for potential study-abroad students in England and around the world. BSU, rightly, expressed its pride in the rankings when they came out this week, but that institution shared the spotlight with one other Minsk-based school. Belarusian National Technical University (BNTU) scored further along in the rankings at close to the same rank as America’s Baylor University and Azerbaijan’s Baku State University.

QS, formed by Nunzio Quacquerelli while he was pursuing his master of business administration (MBA) degree while studying at the Wharton School of Business at the University of Pennsylvania in Philadelphia, has operated for a quarter century. Today, the company is headquartered in northern London’s Hampstead Village, and carries out research from several offices on institutes of higher learning worldwide. Its two most recognized products are its MBA tours (open houses arranged between potential students and representatives of business schools offering MBA degrees), and its annual ratings, which began as a collaborative effort in 2004 with the Times Higher Education (THE) magazine in London.

In 2009, THE editor Ann Mroz led the effort to end the collaboration with QS, suggesting that QS’ methods for generating its ratings were skewed in favor of science over humanities, and that during their collaboration, the methods used were less than transparent. Since then, THE has collaborated with Thomson Reuters to produce their own set of rankings, but QS remains one of the three most influential university ratings providers in the world.

The QS top ranking university this year remained the Massachusetts Institute of Technology (MIT) in the Boston suburb of Cambridge, a position that the American research powerhouse has held for the past three years. Before MIT took the top position in 2012, Cambridge University in England, situated in the namesake for MIT’s hometown, was considered by QS as the top university in the world. Today, Cambridge ties with Imperial College London, a school that has steadily risen in ranks over the past five years, for second place.

The rest of the Top 10 were made up of schools from Great Britain and America. A total of four British schools made this prestigious list, while the remaining six were from the United States.

Neither BSU nor BNTU, the two Belarus universities listed, held a specific position in the ranking. Above position 399, universities are clustered in group rankings which are intended to convey an approximate position among the top universities of the world, according to QS. Six universities, including BSU, were ranked within the 491-500 range of positions in the listing this year; one Japanese, one Greek, two German, and one Russian institute of higher learning also received the same ranking as Belarus’ entry in the QS World University Rankings.

The list of universities rated by QS is far from comprehensive. Although there are between 700 and 800 universities ranked by the company, this is still only 3 percent of universities that operate around the world. Further, being listed is perhaps not as much a function of these institutes being the best in the world as much as it is that they have a working relationship with the British firm: the University of Alaska Fairbanks, one of the leaders in cold regional studies and ranked 276 by THE, is not included in the QS list. But that the two Belarusian schools made the rankings, and one of them reached QS’ Top 500, indicates the growing prominence of Belarusian higher education in the academic world.

Within the Eurasian sphere, the top achieving universities were Russian: Lomonosov Moscow State University was ranked 114 (just below Canada’s McMaster University), while St. Petersburg University reached position 233 in the listing (two notches below Scotland’s University of Dundee). Kazakhstan’s top university was its Al Farabi Kazakh National University, which tied with an Italian and German institute of higher learning at 305. 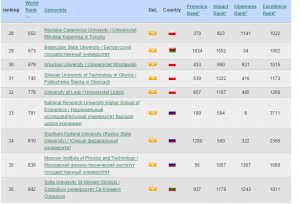 Spain’s Cybermetrics Labs released a month earlier its findings, placing BSU at 673 in the world, and 29 within Central and Eastern Europe. Image from the Ranking Web of Universities website.

QS ratings are based on an analysis of data it collects from institutions and surveys it takes from independent experts. Following accusations by rival THE that their ratings were not transparent, QS described its method of analysis more openly as being 40 percent academic peer review (where academicians are asked to choose the best universities that are not their own), 20 percent faculty-student ratio (an indicator of teaching commitment), 20 percent number of academic paper reference citations (total collected by academic publishing house Elsevier’s Scopus database over a five year period divided by the number of academicians at the given institution), 10 percent recruiter review (survey), and 10 percent international orientation (percent of international students and percent of international staff taken in equal proportions).

According to the press service of BSU, QS’ ranking of the university marks the second time that it has appeared in an international ranking system. Last month, the Webometrics Ranking of World Universities, published by the Spanish National Research Council (CSIC) Cybermetrics Lab, ranked BSU in 673rd place. Among universities in Central and Eastern Europe, BSU ranked 29th between Poland’s Nicolaus Copernicus University in Torun and Wroclaw University.