The museum that can tell you everything about Alexander Suvorov

Today we are proud to acquaint you with the commander who never lost. The photo essay is about Alexander Suvorov, the great commander, or more precisely, about Kobrin Military Historical Museum of Suvorov.

Indeed, every of 60 battles he led was won, despite the numerical advantage in the enemy armies. He was the great russian commander, then how did the Suvorov museum appear in Belarus?

In 1795 Empress Catherine II implemented the russian kings’ long-held dream — she seized the territory of nonexistent Grand Duchy of Lithuania, which included also the modern belarusian territory. Catherine II sent a decree to the Senate. The decree stated that, among others, Alexander Suvorov was granted the estate “Kobrin Key” and got 7,000 peasants. The great commander spent 1797 and 1800 in this manor. 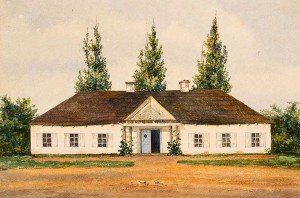 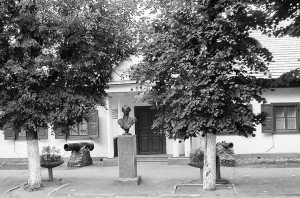 In 1946, when the World War II was finished, it was decided to turn the manor house into the museum. Bit by bit and step by step creators collected different parts of a puzzle: archives, documents, evidence and artifacts. It took 2 years to make the entire picture.

Kobrin, not a big city, has even 3 monuments in honor of Suvorov: one full height and two busts. The first, bronze bust, made by sculptor P. Kyuferle was installed in front of the museum in 1949.

The second one made by N.I. Rukavishnikov is at the end of the park alley. Guess, whose name the park beards? Exactly, it’s the Suvorov’s park. The pond where the commander loved to swim, the stone on which he sat down to rest — all things almost remained the same. Except, perhaps, the stone. The words on it that said: “On this rock the commander Suvorov loved to rest”, were thoroughly beaten during the Polish reign. This magnificent park is the oldest one in Belarus and a nature symbol that has a Republican nomination. 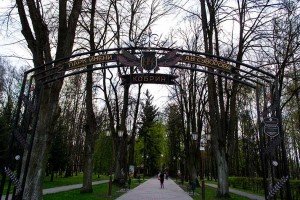 The third monument, full height one, came later, only in 1964. The scupture of an energetic, purposefully striding man was created by V.S. Chebotarev and placed at the intersection of Pushkin St. and Sovetskays St. 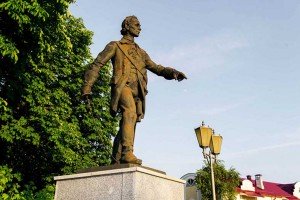 3rd September, 1794, 30 km from Kobrin, near Divin village. The troops of Suvorov grappled with the rebels vanguard of general Sierakowski. When the battle was won, Suvorov entered a small wooden village church of Paraskeva, prayed during the whole thanksgiving service, and then moved on.

Three kilometers away the squad stopped to rest. The commander chose the best place for a nap — a massive oak tree whose branches could perfectly protect someone’s repose. However, today it is difficult to relax near the most trunk, because the tree is surrounded by fence. But every wayfarer can sit on the bench nearby and, while resting under branches, can spend some time reading a plaque on the obelisk. It reminds of Suvorov, one of the famous oak’s visitors. 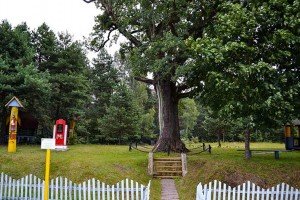 At the beginning the museum had three sections: “Our great ancestors”, “Alexander Suvorov” and “The Patriotic War of 1812”. In honor to 250 years since Suvorov’s birth in 15th November, 1980, the museum was finally dedicated to the life and work of the great commander. Ten years later the museum became multithematic again —  the construction of a new museum building was finished. The manor accommodates the A. Suvorov’s exhibition, while the newest part contains the historical display about the city. 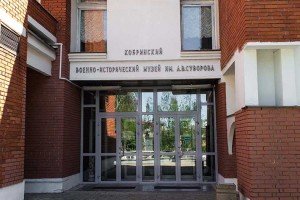 The last one now is 15 wonderful halls with the “Seven centuries of Kobrin” exhibition. Authentic materials tell visitors about the long city history from the very first annalistic mention to the modern time, stopping at the most important facts. During the tour one can learn about periods of prosperity and its decline, a peaceful life and severity of military trials which took place in Kobrin. The display ends with the open air exhibition of military equipment with artillery and soviet armored samples.

Among other things, the museum visitor can also see the archaeological finds from ancient times. The earliest evidence are dated from the settlement time of modern Belarus territory (about 40,000 years ago). 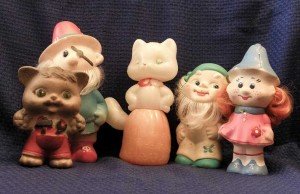 Exhibits from “Toy and Time” display

The exhibition in manor house contains 8 halls that are full of informatuion about Alexander Suvorov’s ancestry, childhood, upbringing, education and battles. Lots of artifacts can be found here. A real drum from Semenov’s regiment where the great commander started his military service, photocopies of famous paintings “Suvorov – corporal of Semenov regiment cleans the gun” (by N.S. Samokish) and “Empress Elizabeth awards stand guard Suvorov” (V.F.Timm) and others create the whole portrait of this great man.

Exposition perfectly acquaint with the era of great victories from the most beginning of his military carrer that was started with the Seven Years’ War. The saber, which Frederick II awarded his general von Zieten, is a special trophy. Even many artifacts of Russian-Turkish War, Italian and Swiss campaigns hardly can explain how great Suvorov was as a commander.

The exhibits preserved from the time of his living in the estate are of particular interest. V. Alexeyev’s books “Suvorov-poet” and “Biography of Alexander Suvorov, written himself in” show few more facets of this militant man. Excerpts from Suvorov’s “Science of Victory” can be used as basic principles not only in war. The unique relics, banners, arms collections, ammunition and equipment from 18th and 19th centuries were carefully preserved for today visitors. The halls had magically saved the spirit of Suvorov’s time. 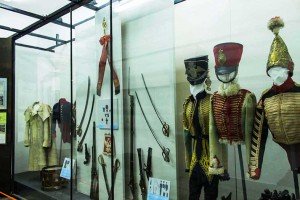 One of the stands

Exactly at noon on 9th May, 2014 Alexander Suvorov won one more battle. At that moment the voting for “The Best Russian Commander of All Time” were summed up in Moscow. First place took Alexander Suvorov with more than 500,000 votes, the second – Georgy Zhukov, and on the third was Alexander Nevsky.

Join our journey, and we’ll together open new unexpectable pages of belarusian history!

*all prices in BYR