The research associate of the museum Andrey Lenevich instantly notified the uniqueness of this old culture institution. In 2023 the house museum will be celebrating its 100th anniversary. The principal aim of the House museum of the 1 Congress of RSDLP is, in the first place, to inform about the history of Minsk at the end of 19th – beginning of the 20th centuries. This period is hardly touched upon in any other museum. The building itself is noted for being the only sample of wooden country estate architecture of the end of the 19th century that has been preserved in the city center. What is more the building is also noted to have served as Yanka Kupala’s residence up to 1923! 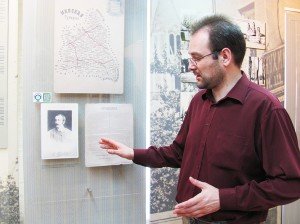 In such away only in this museum you can get acquainted with the person who contributed into the prosperity of the city in those years. We are talking about the Head of the city – count Carl Chapsky who had a dream to turn Minsk neither more nor less than into Eastern-European Paris in the terms of social and cultural richness. Under Chapsky’s sway first cinemas, stadiums, hospitals, a power station as well as Olivaria brewery (in Chapsky’s times it was called Bohemia) appeared. In the first year of his rule Chapsky was the one who did everything in his power to get under way the unfinished construction of the theatre that later on turned into the well-known Kupalovsky theatre. During his 11-year rule from 1890 till 1901 Carl Chapsky officially rejected the remuneration and didn’t spend a ruble from the city’s budget on his personal needs. The city was in the stage of dynamic development. The population of the city was increasing too: in the beginning of the 19th century about 90 thousand people lived in Minsk while by the beginning of WW1 the population of the city passed for 100 thousand people. Today 2 million people reside in the capital of Belarus.

As it appears from the wages people lived quite well off at the end of the 19th – the beginning of the 20th century. At least if you compare the income of teachers and doctors of those times with the current ones, you will see a huge difference which doesn’t put the actual situation into favourable light. Of course someone can object ‘Prices were different in those times too!’ Undoubtedly, the basic social set of products such as bread, milk, meat was sold for a much bigger price. Today prices are lower only due to the cheaper mass production of foodstuffs. Although accommodation was accessible in those times and wasn’t so extortionate as it is now. 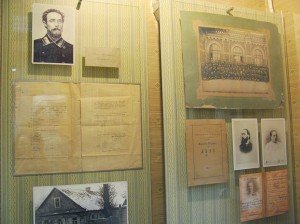 According to various estimates, the railway clerk Pyotr Rumyantsev earned enough to afford himself to rent 3-4 rooms in a nice house in the main street of the city. This house belonged to Frantishka Rzetskaya. Pyotr Rumyantsev didn’t belong to any political party, but he was a proponent of liberal political views. As they say, he was a sympasizer which was the reason for his multiple arrests. The name of Pyotr Rumyantsev came down in history because he provided a room for holding the I Congress of RSDLP which in 1898 was attended by 9 delegates from different cities of Russian Empire. 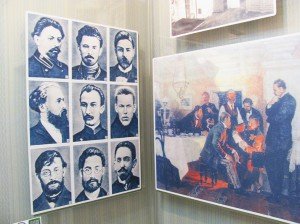 9 delegates of the I Congress

It’s important to initially demystify the idea that these 9 delegates were at the forefront of the creation of the communist party. Nothing of this kind! After the II Congress of RSDLP when the Social Democratic Party was headed by Lenin many of them abandoned their views. Some of them even left Russia because the values that were proclaimed by the new leader didn’t coincide with their ideals.

By the way visitors’ favourite question is ‘Was Lenin present at the I Congress of RSDLP?’ The answer is no. In that time he was in exile in Shushenskoe. However in the exposition you can see a photograph taken out of the leader’s case as well as learn about Sergey Zubatov who was at the forefront of the creation of political investigation system and political exiles in Russian Empire.

The delegates of the I Congress of RSDLP were housed in various apartments in Minsk. In the evenings they would gather in the house in Zaharevskaya Street. One of the halls of the museum represents a memorial room dedicated to those events. Of course nothing of furniture and interior items has been saved up to our time. The building itself was burnt during the Great Patriotic War and later on it was restored. 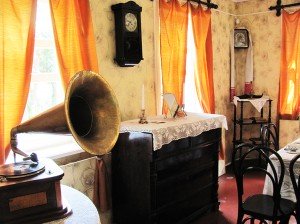 Carefully restored interior of the house

‘We have photographs of the old exposition. That’s why the tableware, pieces of furniture were gathered taking into consideration the images we had at our disposal,’ says Andrey Linevich. 90% of the room interior conforms with what the house looked like on the inside during the conducting of the congress. Even the original pieces of furniture of the marked period were found. There are two items of particular value – a mirror and two metal candlesticks that used to belong to Pyotr Rumyantsev. His son donated them to the museum. 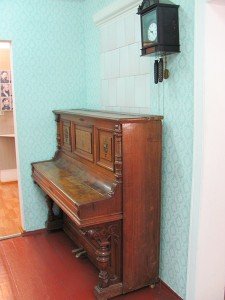 In the second room your attention will be caught by a unique over 100-year-old exhibit that was preserved in an ideal condition. It’s a piano made by L. Schmidt German company. It’s well-known that at the end of the 19th – the beginning of the 20th century citizens had a few entertainments:  to listen to a gramophone or to play the piano.

The last hall introduces you to Pyotr Rumyantsev’s documented memories as well as those of a delegate Nathan Vigdorchik who in 1923 was invited for the opening ceremony of the House-museum of the I Congress of RSDLP. One of the stands features photographs of the distinguished guests that visited the museum in due time. Among them were the leader of Cuban revolutionaries – Fidel Castro, the leader of Yugoslav communists – Iosip Broz Tito and others.

In the 90s the museum was closed down and its destiny was being decided on for the whole year. In the Perestroika period the building even appeared under a threat of being demolished. Yet when it was handed over to the Ministry of Culture it was decided to keep the museum. Today we can see the renewed exposition which tells us about the history of Minsk at the end of 19th – the beginning of the 20th century when the I Congress of RSDLP was held.

Today the museum is frequently visited by Swedish social democrats that take great pleasure in visiting the place where the first congress of their Russian party fellows was held. A few distinguished communists have visited the house museum since 2013. Among them were the prime minister of Vietnam, China and Cambodia, a member of the Politburo of the Central Committee of the Communist Party of China.

Also you can trace the transformation of Minsk from the photographs of the end of the 19th – the beginning of the 20th century that can be found in the museum. For instance, what Vilinsky railway station (where the Central railway station is located now) and Brestsky railway station ( now it’s situated in the University of Culture region). Moreover, you can see what the building in Volgogradskaya Street used to look like as well as Liberty Square… 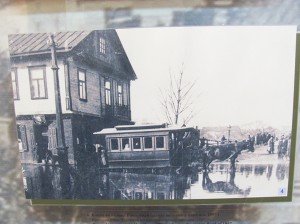 In the course of a century-long history layouts of most streets have changed or disappeared from the city map. Yet the main street hasn’t changed its location: instead of the modern Prospect of Independence there used to be Zaharevskaya Street which was the main street of the city.  Horse-drawn tram was the most popular means of transport. One of its final points was the round square where today Victory Square is located. Trams in Minsk appeared rather late, already after those appeared in Vitebsk. 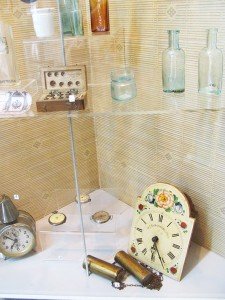 At the end of the 19th – the beginning of the 20th century in Minsk drugstore apart from medicines which were sold like mixture powder which came together with scales you could also buy a watch, dumbbells, beauty products.

The price of the ticket for adults is 10,000 BYR, for students – 8,000 BYR, for schoolchildren – 5,000 BYR. Additionally an excursion for adults will cost 20,000 BYR ( regardless whether for one person or a group). An excursion for children will cost 15,000 BYR. The physically challenged, veterans of the Great Patriotic War, children up to 7 years-old are allowed to visit the museum out of charge.

Working hours: from 11am till 7pm (the ticket office works till 6:30pm)