Museum of Squirrel is dedicated to the symbol of Berestovitsa

On October 7, 2014 Belarus saw an opening of museum devoted to a squirrel which is the symbol of Bolshaya Berestovitsa village. Visitors are welcomed by a real squirrel and the expositions of the museum deals with life of fluffy ginger creatures as well as with the history of Berestovitsa region.

Visitors are welcomed by a real squirrel

In 1754 together with Magdeburg right the coats of arms on an oval shield Bolshaya Berestovitsa was granted by King August ІІІ.In 2006 the contemporary coat of arms of the village and the region was approved of. It was based on the historical coat of arms. At the same time the project on creating a regional museum started and the work group to collect exhibits was organized.

The Museum of Squirrel is located in the former fire department. It cost about a billion BYR to reconstruct it. In 2013 the reconstruction was finished. At the same point the process of arranging the exposition started. According to the chairperson of the Regional Executive Committee Anton Kulisevich this is one of the few museums devoted to squirrels that exist in the world. Staff of Grodno Museum of History and Archeology helped to arrange the exposition and make up the concept of the museum. The Head of the museum Yuri Kiturko pointed out that even though opening of new museums isn’t a commonplace in Grodno region it was already the 2nd opening for the last month. 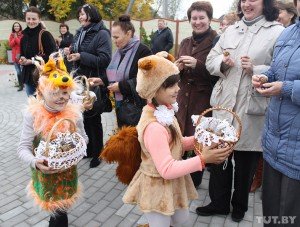 Openning ceremony of the museum

‘The museum in Berestovitsa isn’t only the youngest one in Belarus, but one of the most interesting and unique ones as well. Here you can discover the history of the region, local nature and even come across some live exhibits. No other museum of this kind can be found within Belarus. This is a reason for tourists from all over the country to come here,’ thinks Yuri Kiturko.

All in all, the museum occupies four halls with overall territory of 106 square meters. One half of the exposition is devoted to the squirrel. Here you will come across a cage with a real squirrel and information about squirrels that inhabit Belarus. The third hall is a historical one. It deals with archeological materials, the history of the region and prominent people that are connected with Berestovitsa. The forth hall is dedicated to the two World Wars. 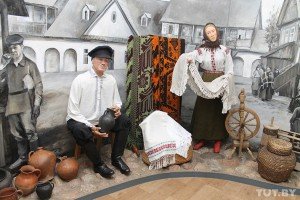 Historical installation of the museum

The exhibits for the museum were gathered all over the region. Many of them were brought by the locals. Some objects for the exposition were sent by the Consulate of Mongolia and the Embassy of China in Belarus. The squirrel was bought in Grodno from a man who specializes in squirrels. A wild one wouldn’t survive in the museum. An ordinary Belarusian squirrel costs about three million BYR.