Whilst not having exact data historians keep bothering about the birthplace of the hero who earned fame on both continents, the museums in Malye Sehnovichi and Kossovo that purport to be called the hero’s small homeland invite tourists to make an acquaintance with the famous Litvin’s life. 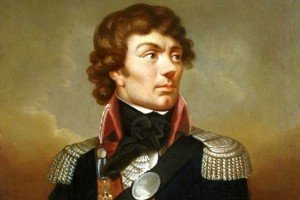 Up to the present day the controversies about the birthplace of Tadeusz Kosciuszko don’t exhaust themselves. According to the most widespread version a hero of Belarus, Poland and the USA, an honorable citizen of France was born in the tract Merechevshina that is located near the town of Kossovo (the territory of present Ivatsevichi Region). This version was based on an excerpt from the metric book which witnesses Kosciuszko’s being baptized in 1746. At the same time according to Anatoly Benzeryk’s book Kosciuszkos from Sehnovichi. The History of the Ancient Clan the document doesn’t claim that Tadeusz wasexactly in Merechivschina.

‘It should be noted though that nowadays there’s no any document from the 18th century where the name of Tadeusz Kosciusko would be mentioned alongside with Merechevschina <…> If the hero really considered this place to be his homeland why wouldn’t he express desire to visit it during his long-term stay in Belarus in 1784-1790?’ writes Anatoly Benzeryk.

The researcher says that Tadeusz Kosciuszko’s attitude to Sehnovichi was quite different. The estate in Sehnovichi (the present village of Malye Sehnovichi, Szabinovsky region, Brest) disputes the right to be called the hero’s birthplace.

‘The name of Tadeusz Kosciusko and the ancestral estate in Sehnovichi are so closely related that hardly any biographer can do without mentioning it when writing Kosciuszko’s biography. Tadeusz Kosciusko himself expressed deep love and care for this very place,’ claims Anatoly Benzeryk.

The Memorial Museum-Estate of Tadeusz Kosciuszko is located a few kilometers away from the centre of Kossovo, near the majestic palace of Puslovskys’ which is currently closed for reconstruction. 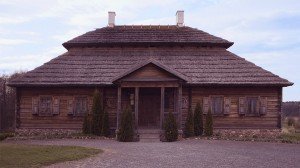 The founders of the museum solved out the dispute about the   hero’s birthplace by putting a memorial stone at the entrance of the museum. It says that ‘Tadeusz Bonaventura Kosciuszko was born here in Merechevschina.’

According to the staff of the museum “the original” of the estate was built by Tadeusz’s father in 1720.

‘In the years of the Great Patriotic War the house was burnt down and only the basement was left,’ says the director of the museum-estate Irina Antipenko, ‘Years were passing by. The basement kept overgrowing. People remembered this place only because of the stone which was “an object of worship” for visitors from all over the world who wanted to honour the memory of Tadeusz Kosciuszko.’

In 2003 the excavations started and as a result the cellar and the basement of the old building were found. It served as a starting point for the construction of the house on the basis of lithography by Michael Kulesha and Napoleon Orda.

The works were finished in 7,5 months and a grand opening took place on September 23 in 2014.

‘In the first years we had swarms of visitors. People were coming to look at this place,’ explains the director.

Up to the present day people come to Kossovo. Moreover the museum acquaints visitors not only with the life of the famous Belarusian but also with the household of the average gentry of those days.

The estate is divided into two parts: a memorial one and a historical one. The first one includes five rooms: the vestibule, the kitchen, the mother’s room, the father’s office and the living-room. Every room is designed with the furniture of the 18th-19th centuries and the interior is close to that of the epoch when Kosciuszko lived.

The excursion starts in the vestibule where the photographs of the construction of the museum as well as some pictures made by the native of Kossovo Yuzef Shimanchik are presented.

‘In the war years Shimanchik went to Poland. His daughter brought these photos from Lodz after his death. We went to people and pictured life as it actually was. Now we’ve hung his photographs that touch upon our theame.’ explains the director.

Onwards the director invites you to the kitchen. There is a wooden table with a samovar on in front of the room.  Near the furnace you will see some houseware. On the walls there are wooden cupboards. 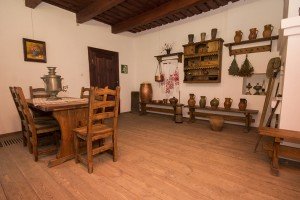 ‘We did our best to reflect the household of that epoch. Approximately the same kind of furniture could be found in those days. The dishes were made of copper, wood and clay. Some of the household items were brought to us by the local people,’ says the director.

From the kitchen we proceed to the mother’s room. There are some pieces of furniture like a wardrobe, a bed, a credale, a mirror. Above the mother’s bed there are portraits of Tadeusz’s grandparents: Ambrogy and Barbara. 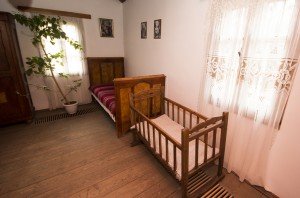 ‘Here little Tadeusz used to sleep in approximately the same cradle. The bed was delivered from the castle of Puslovkys’. It was found in a different region,’ adds the director.

Next to the mother’s room is the father’s office.

Near the window there’s an eighteen-century writing table with neatly organized writing items on. 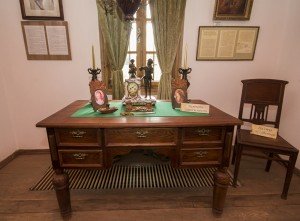 The walls of the office are decorated with photocopies of Tadeusz Koscioszko’s drawings that he made when studied at Parisian Academy of Arts:

‘After graduating from the Cadet Corps in Warsaw Tadeusz being the best cadet was sent to France for further studies. He went on studying military affairs along with attending lectures on fine art. The original drawings are kept in Krakow.’

Then the excursion moves on to the living-room.

‘The living-room lacks the harmonium that Kosciuszko used to play as well as the chess desk,’ complains the director, ‘The family used to gather here in the evenings and discuss different matters, drink tea, play the musical instruments.The father and sons used to play chess.’

The walls of the living-room are decorated with paintings. One of them was made by Yakov Yanchenko, the former director of a school in Kossovo. During the war he lost his right arm and painted with his left hand.

The excursion is finished in the historic room where different archeological finds are gathered. 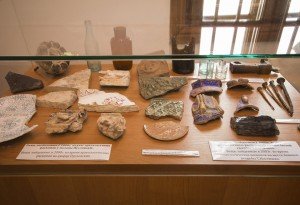 The archeological show window is divided into two parts: on the left there are finding from the excavations in the castle of Puslovskys’, on the right – in Kosciusko’s estate. It’s curious that after the estate was burnt down one of the locals took a part of the burnt floor board with him. When the museum was opened this item was handed over to our staff. Now we keep in under the show window.

Besides the putting-stones, copies of sermyaga, swords, bullets, fake guns are presented there.

‘ When we received American cadets they presented us with the banner of the American Army Brigadier General and a modern American cadet hat,’ told us Irina Antipenko. 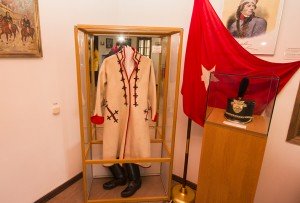 According to the director the Memorial Museum-Estate of Tadeusz Kosciusko is popular with both locals and foreingers:

‘Of course most frequently we are visited by schoolchildren and students. Sometimes organized groups from tourist agencies visit us. At the present moment we collaborate with 115 agencies. A lot of foreigners come as well. Before the last year the Polish used to visit us in groups every weekend in two-three buses.’

By the way in 2013 over 12 thousand people visited our museum. About 2,5 thousand of them were foreingers.

In Malye Sehnovichi that dispute Merechevschina’s right to be called the birthplace of Kosciuszko there’s also another memorial corner devoted to the great fellow countryman. A separate room was devoted to the hero of two continents in Regional Ethnographical Museum of Szabinovichy which was opened on May 19 in 2011 on the basis of the local school.

The young director of the museum Sergey Demidov is convienced that it’s not possible yet to say where exactly Tadeusz Kosciuszko was born:

‘The date and place of birth have been debated for a long period of time. Kossovo’s Cathedral provided an extract from the metric book which says that on February 4 in 1746 Tadeusz Kosciuszko was baptized according to the catholic tradition. Respectively it was decided on that if he was baptized there, he was born there. Although it is not written that he was born there namely. This is how the birthplace transferred from Malye Sehnovichi to Merechevschina. Even though Malye Sehnovichi itself was the ancestral estate of Kosciuszkos-Sehnovitskys’ and Merechevschina was only a temporary residence.’ 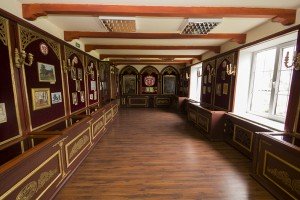 Unfortunately Kosciuszko’s estate wasn’t preserved there’s a park in the village that was called after him. The legend says that the famous compatriot planted some of the trees with his own hands.

Kosciuszko’s room in the museum was based on the objects that were kept in the memorial quarters of the local school.

‘ We have bullets, the canister found on the battlefield, various presents brought by the Polish delegations that traditionally come here every 4th of February,’ shared the director.

The walls of the room are decorated with portraits, drawings of the estate, photographs of placed associated with Kosciuszko, copies of documents. 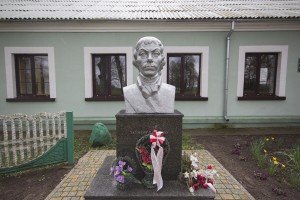 The museum also has its zest. It’s a monument to Tadeusz Kosciuszko which is placed at the entrance. According to Sergey Demidov in Belarus there aren’t other monuments to the hero besides the one at the museum and the other in the embassy of the USA in Minsk.

Despite the controversies about Kostiuszko’s homeland museums are not rivals:

‘They have their own formation of history, we have ours,’ summarized the director.

Tourists only benefit from this. Belarusian tourist agencies take people to both Malye Sehnovichi and Kossovo.