Belarusian women tennis team has all chances to win in Budapest

The Belarusian women’s tennis team, with Victoria Azarenka playing in it, is preparing for a leap forward in the tennis world. Before the team’s leaving for the capital of Hungary to play Fed Cup.  Tatiana Poutchek and Vladimir Voltchkov, the most  important people in the Belarusian tennis, were asked some questions. They are speaking about the high noon that came not so early.

What is the team fighting for?

In the end of October, 2014 everyone became aware of the fact that Victoria Azarenka would play in Fed Cup for the first time from 2011. “The secret” was revealed by Alexander Shakutsin, the President of the Belarusian Tennis Federation, at the National Tennis Academy opening ceremony. According to Shakutsin, the decision about Vika’s participation was made during a two hours telephone conversation. “At the moment we are forming the team that is able to reach a success. And I think we will be not just Fed Cup participants, we’ll fight for the victory” – concluded happily Alexander Shakutsin.

To have the chance to win Fed Cup our team should first leave Group One Euro/African Zone. And the opportunity to do that is so close: the qualification matches will be in February 4-7 in Budapest. To reach a success the Belarusian tennis players have to become leaders in Group C, where the teams of Georgia, Bulgaria and Portugal play, and then the Belarusian team is to defeat the leader of Group B, where the tennis players from the UK, Ukraine, Turkey and Liechtenstein will compete. 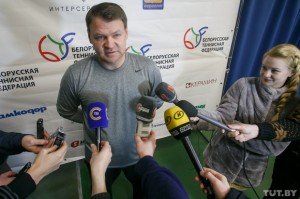 – We can say that our Group is not so difficult,  said Vladimir Voltchkov, the head coach of the men’s tennis team and the deputy director of the National Olympic Tennis Training Center. – But we should understand the specifics of the tournament. It’s not a single competition; here we play as a team. And we should also remember that in Euro/African Zone all the matches, singles and doubles, take place on the same day. Of course the main thing is tactics; we are to expend our energy in the right way. The coaching staff that will go to Budapest is really skilled, so everything will be ok. 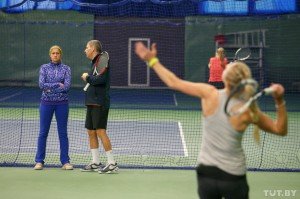 On the training ground

– We have not decided yet who will play in doubles, says Tatiana Poutchek, the team head coach. – We have the right to change the team’s composition on the day before the competition’s start. We’ll examine our rivals’ team and then we’ll make a final decision.

If the Belarusians win in Hungary, they will qualify for the World Group II Playoff, where 8 teams fight to be members of the tennis elite. By the way, the previous attempt to leave the tennis bottom was a failure, but at that time they played without Azarenka.

– We need victories, Tatiana Poutchek admits. – We’ll be able to play at home next time that will entice so many tennis fans and will make the players happy. But at the moment Victoria Azarenka and Olga Govortsova have no a possibility to play in Belarus.
– We are ready to win, Voltchkov assures, – but much depends on the 2nd and the 3rd team members. If the girls do the utmost to win their matches, our leader will appraise it. In general, I believe, that having Vika in the team and not qualifying for the World Group Playoff, not winning a possibility to play some marvellous matches at home as Max Mirnyi did it, would be a great mistake. By the way, many tennis teams have no such outstanding players as we do, but sometimes they reach success. So, we are also able to do that.

The role of Azarenka

For sure Azarenka is crucial for the team in the next matches. The best Belarusian tennis player of today is ranked 49, but this fact doesn’t take into account Vika’s real skills and her previous great victories. 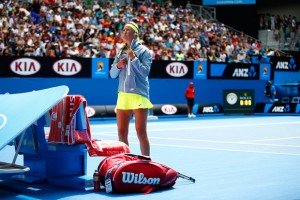 2014 fell behind and in 2015 Victoria played some successful matches where she showed her excellent skills which earlier helped her be in the WTA Top 10. Moreover, the coaching staff appreciates Azarenka’s current physical state.

– During the off-season time I talked much to Victoria and I was aware of her careful preparations for the season, says Poutchek. – Azarenka’s result in Brisbane made me feel nervous, but I used to play myself and I know how it’s difficult to show the best after an array of injuries. Last year Vika didn’t manage to show her best due to those injuries. Now she has little practice and it influences her results. But the main thing is concentration, and I was highly surprised by Vika’s way of playing in Australia. The match against Wozniacki was great, Victoria showed her real level.

It’s possible that Azarenka will play every time better and better during Fed Cup, and she’ll get the game practice that she needs. It will motivate her as well as her team mates’ victories. 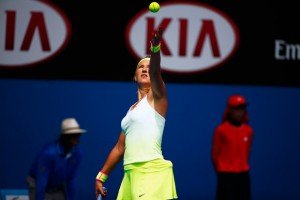 Recently Azarenka practiced without the coach in Monaco, her residence.

– Vika is a great player, she has a strong team around her and we don’t see a necessity to interfere in her daily trainings. Our aim is to be aware of her wishes within the framework of Fed Cup preparations. For instance, if she comes to Minsk and she needs a sparring partner, we’ll satisfy her needs. 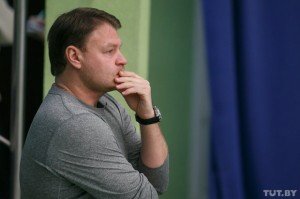 In Poutchek’s opinion Victoria’s “isolation” is connected with her contract obligations, but (if someone doubts) she’s a team player. “I used to play with her and I know that she fights till the very end in any situation”.

All in all there’s no sense in discussing the diversity of our players. We have the tennis players of different times and of different levels. We have an outstanding player, and some great young players. And it’s a must to make them a team. Vladimir Voltchkov knows how to do that.

– From where I stand, the best way to unite the team is to propose them to work their way together. For example, Max and I have been striving 10 years to be in the World Playoff. We had misfortunes, conflicts and staff like that, but we learnt to respect and trust each other. Plus sharing experience within the team, motivation – these are the keys to success. As for our today’s women’s team, we’ll start with having meal together and will try to maintain the natural team’s climate.

February, 3 Victoria Azarenka is to join the team in Budapest, where she had gone to 2 days earlier. She’s said to come with her personal physio and another team member.

About the other team members

Apart from Victoria Azarenka the team includes Olga Govortsova (ranked 156 in the world), Alexandra Sasnovich (143) and Vera Lapko (838). At the Australian Open that finished some days ago Olga and Alexandra failed, they didn’t manage to qualify. However, the coaching staff admits that the girls are well prepared. 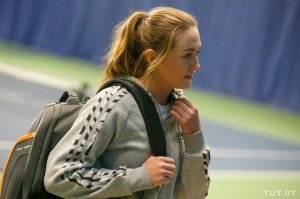 – To achieve great results we should have two strong team members who are able to defeat any tennis player from the WTA Top 100, Voltchkov says. – Olya and Sasha did it once. And if they play at the same high level the Belarusian team won’t have any problems. But we want more; we are interested in other Belarusian players.

Here it is an example of Belarusian coaches’ work. The 16-year-old Vera Lapko became a quarter finalist of the youth Australian Open-2015, both in singles and in doubles. And it was the best result for the Belarusians. So now she’s in the national tennis team. It should be mentioned that Tatiana Poutchek didn’t plan to include Vera into the team. The 17-year-old Iryna Shymanovich was preparing to play, but due to her back injury she couldn’t help the team. Iryna will be replaced by Lapko who will have her debut in the national team.

– The preparation was carefully planned, Poutchek reports. – From January, 20 Olya and Sasha, led by their personal coaches were preparing for Fed Cup in Minsk. Vera Lapko joined us on the 30th of January. Vika practiced in Monaco.
Let us recall that the fist match of Fed Cup Group One Euro/African Zone the Belarusian team will have on the 4th of February. Our team’s rivals are players from Georgia. On the 5th of February the Belarusians will fight against Bulgarians and one day later against Portugal. The final matches will take place on the 7th of February.

Unfortunately, Belarusian TV channels will not broadcast the matches. However, you can follow them thanks to SPORT.TUT.BY twits.

The close collaboration and friendship between the former Belarusian tennis leaders continues. Having retired they led the national tennis teams and work side by side. Vladimir often helps his colleague.

– Volodya calls us brother and sister, shares the secret Tatiana. – We couldn’t have that warm cooperation without mutual understanding that we had from our childhood. We are always on the same wave. Vladimir has great practice experience in Davis Cup matches and significant working experience at the international level. And now, frankly speaking, his advice really helps us.

– I share my experience with boys and girls, says Vladimir. – For instance, I take part in Sasha’s trainings. Tania goes to tournaments with her, she knows more about WTA. And I help Sasha as much as I can.

Furthermore, I am responsible for the preparation of the right game model in the National Tennis Academy. Here Olya Govortsova had her preparations for the season. She liked the Academy, and it makes me feel happy. She’s supposed to practice here before other tournaments and it’s wonderful. It means that we have good coaches, courts, gyms, recovery programs and we are at the same level with international tennis academies. And I’m ready to help Olya if she needs some advice. 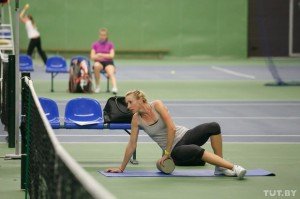 On the training ground

Team work is essential. Sportsmen should understand that there’s a group of people who are interested in their growth and achievements. We are striving to make the process of trainings in the academy the way we want. And I can say that we’ll reach the needed results very soon.

P.S.: So, the high noon came. When both sides (coaches and tennis players) are so interested in each other, we can anticipate some great results. For instance, Fed Cup matches will help Vika to get the game practice and qualify for the Olympics in Rio, and the team will be able to qualify for the World Playoff thanks to Azarenka. And if everyone is happy with that Shakutsin’s dreams may come true.