Victoria Azarenka, who is known all around the world due to her tennis achievements, gave an exclusive interview to a Belarusian Tennis Federation journalist on the occasion of her 26th birthday which is 31st of July.

Vika, first of all I would like to congratulate you! How do you feel about your birthday?

I can’t say that birthday is my favorite holiday. I enjoy New Year and the 8th of March, the Women Day more. (laughs)

You were born in 1989, so you have 20 soviet months spent on your biography. Do you remember anything? Maybe there are some special photos left or your mom told you stories about green bananas, which people used to leave in wardrobe to ripen..

What’s that story about green bananas? I, probably, don’t remember anything of the kind if I’m asking such a question. Unfortunately or fortunately I don’t know. Of course, it would be interesting to turn up in those times and compare how big is the difference between now and then.

Most people find your manners and behaviour occidental . Do you feel like a world person? Or more Belarusian?

It’s hard to  come to a clear understanding, who you really are. My soul is definitely Belarusian and whatever happens and wherever I am, my roots will always be here. I grew up in Belarus and my parents still live here, besides my character was formed here. When I come to Belarus, I come home, to my country. Yes, I have the job, which made me a traveler since I was young. I absorbed different cultures, adapted to other mentalities, peoples and thereby developed a diverse vision of the world.

Belarus,  what does that mean to you? What associations do you have?

I don’t think there should be many associations. Simply, when I hear “Belarus”, I start thinking about my home, my roots and then some special feeling arises. Probably, you start realizing  it as the time passes. Actually, I ‘ve recently revaluated  this and now I have a more clear idea of where one comes from: when you are a teenager you treat your motherland, like your parents: you love it, but find yourself in in kind of an opposition – you for something new, unusual -but eventually you come to understanding, what’s important for you in the first place. That’s why last year I’ve developed a more mature feeling about this country.

Modern tendency is to  come back to origins. Embroideries’ve became fashionable; youngsters try to talk Belarusian more. Do you approve of it?

I don’t like trends and I think that if you feel something real, you do this sincerely and that’s the main point. But, if you are  only following fashion, that’s all unreal. Of course, we shouldn’t forget where we are from, and our task right now is to support and promote the country’s culture, revive nationality, no matter where the world goes.

I know, that you’ve got used to draw with fingers lately. If you draw your country, what color will it be?

It’s going to be green, definitely. I wouldn’t even think this over. Lately when I think about our country, I have associations with green color, I prefer it.

And state flag, it has the same color…

What’s the best year and day you remember. Was that in your childhood?

Year… Maybe, this year will be the most memorized. For the last year and a half I received more life lessons than in my whole life. On and of the court. By the way, all those lessons’ve made me much stronger. And the most exiting day is, perhaps the day of my friend’s wedding (Vagen Acopian, a childhood friend, deputy director of BTF Ed.), the day when I feelt the motivation again and began to go out of my difficult situation. That’s happened last year, the day itself was very strange, I don’t even know what’s exactly influenced me that much. Maybe I will understand that after a while on my own and will be able to explain it then.

Which birthday gift was the most unexpected, touching?

Well… I haven’t been celebrating my birthday for such a long period! Somehow it didn’t work, that’s why it’s hard to remember. It’s  little sad… And as far as the question about surprises is concerned – my dad likes to call to congratulate me with my birthday at 6 am, that’s always a surprise for me (laughing)

Vika, is it easy to surprise you?

In fact yes, very easy. It’s hard to surprise me with material moments, but it’s easy to do this with something emotional, creative, sincere.

You are 26. How do you feel: an experienced adult or a young, sometimes vulnerable grown up? If you took a biological age test, what would your age be?

I think, I would have to pass it a few times, cause depending on circumstances I feel differently. Sometimes as if I’ve lived a long, full life. I have such rich life experience, not everyone gets an opportunity to experience. But in my heart often feels very young, I have the same passion, the same emotions that I’ve had in my childhood. When I go out on court I feel the same inspiration, passion, and desire. I feel mature and experienced, but I never forget about some moments from childhood. When I have to be serious and businesslike – far beyond 30, but when I’m with friends I feel relaxed and even younger than 26.

In you interviews there’s always one keywords – “motivation”. Moreover, this applies not only to the sport, as I get it. Does spontaneity live near motivation?

Spontaneity is my original quality, that’s what I really have, but sometimes I suppress them and choose discipline. Without it I wouldn’t have reached such results and got to the level where I am now. But in my heart I’m still a spontaneous person, love to act as I feel, and I often listen my intuition. There whave been some moments when I lost intuition, but now I trust my feelings more, than anything or anybody else.

In sport, you are very hard like a metal rod, inflexible, very strong and charged with insane energy. Typically, such people are very vulnerable when they’re not in public. Is this about you?

I’m rather more sensitive and sentimental, and this gives a very interesting balance to my character: people who know me very well off the court are always really surprised. Therefore, I believe that these qualities are my advantages, which I can bring in sport. I play from the heart, very sentimental, but at the same time with energy and rigid discipline.

How do you refill your energy supply? Training? Friends? Family? Spiritual mentor? Hang Out? Loneliness?

The main things, of course are family, friends and now my dog (hope to have one more soon). I love to spend time with the loved ones; communication with them gives me tremendous emotional charge. So, close people, perhaps, is the most important thing in my life.

This is another thing. I cant say that I’m getting energy from my trainings, they are more like tiring, though, on the other hand, tennis gives psychological reserve, tremendous satisfaction, which helps me to recover physically. Tennis is the thing that I really love … I also like loneliness sometimes: I like to sit and watch on the stars, water and moon. I enjoy driving a car with no predetermined direction. Incidentally, this is one of my favorite things to do when I’m alone. 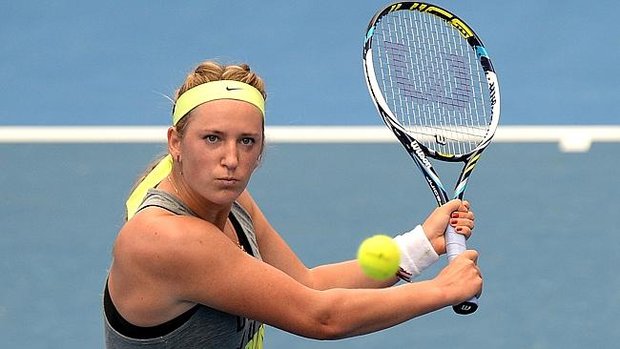 Vika, according to my observations there are more men among your friends. Is it so? What do you most appreciate in people?

I do have more guys among my friends, that’s totally true. I grew up in a boys’ companies, it has always been easier for me to find communicate with them, because I have lots of the same interests and hobbies men have. Female friendship, a real female friendship is very strong, and I really appreciate it. I also have very close girl-friends. The main qualities I appreciate are honesty, sense of humor, commitment and openness.

Your coaches are always more than just technical teachers? Is it easy to work with you, what’s your opinion?

I think, it should be very interesting to work with me. I love and can listen and I always strive to make myself better. On the other hand, I  am always challenging coaches’ mentor, demanding them to work constantly. Therefore, a real professional will always be interested. In general, when you have high goals, the definition “easy work” is not appropriate. Another question is how comfortable it is the work. I actually hope it’s comfortable. I always treat my coaches with great respect, appreciate them and listen to them.

Tennis in Belarus today is on a special position. In your time players could not have dreamed of such centers and courts, could they?

If you compare the terms, it’s night and day, huge difference. Now players have great advantages, but one should treat this very carefully and shouldn’t take it for granted, as if someone owes it to you.

What support do you get personally? Do players of such a hight level have any needs?

I have always tried to be independent, didn’t want to be obliged to anyone, worked for myself, and was a boss myself. Last year the situation has changed, starting October 2014 I started working with our federation, at first I was really interested to work with Alexander Vasilyevich Shakutin.

In fact, new attitude of tennis federation leadership has spurred me to improve, develop and help. I believe that I can do a lot, too. I love this kind of sport, it’s given me lots. I started to play Fed Cup again. I have, incidentally, never felt such emotions as I do feel now; I’ve never had so much fun, playing twice this year in the Fed Cup team. Now my goal and purpose is to improve tennis, raise the bar to the highest world-class level, so far we have such an opportunity.

And now I want to organize a better structure with the help of me friends and the leadership of the federation. I don’t think about money, it’s different, it’s about the interest in you. Many people think: she earns a lot, she doesn’t need anything. But it is important for everyone, that someone would get involved in your life, participate in it – that’s the main support. Interest of leaders that’s what I really missed and needed.

26-th birthday. Have you decided how are you going to celebrate it? Will you find time for that in your busy sports schedule? I know that you can train till it’s late at night …

I have already planned it, but I haven’t celebrated it yet, so far that’s a secret.

If you didn’t have anything to do on 31 of July , what would you organize? What present would you give yourself?

I haven’t celebrated my birthday since I was 13 years, that’s why now, for the first time after a really long period, I’m going to do everything that I want. I think, I’ve deserved thisholiday! 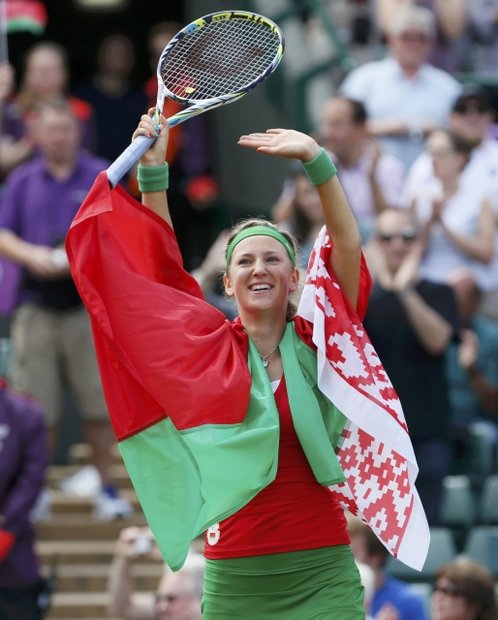